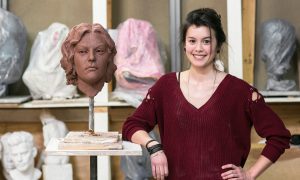 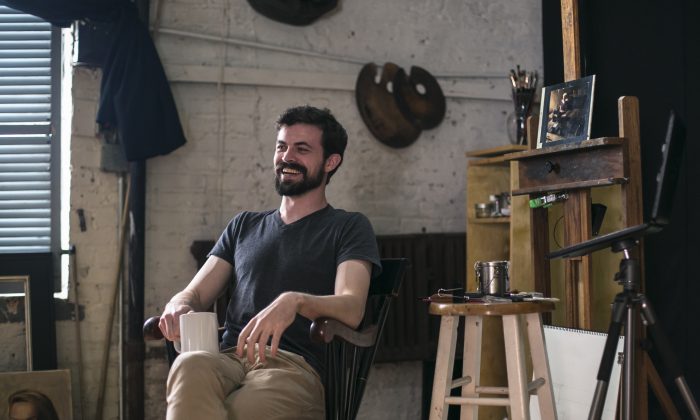 Artist Edmond Rochat talks about his life and work in his studio at the NYK Academy in Spanish Harlem, New York, on May 31, 2016. (Samira Bouaou/Epoch Times)
Arts & Culture

NEW YORK—He left a coat on a metal folding chair, in a rather empty room. Sunlight gently beamed onto the tiled floor, chair, and coat. Edmond Rochat painted that scene in solitude. The way he captured the light and shadows evoke layered feelings—anticipation, everyday familiarity, a hint of foreboding. The coat seems either forgotten or treasured, as a singular outdoor garment. It holds traces of the owner’s presence. Rochat titled the finished painting “Vagabond.”

You may wonder how a painting of simply a coat on a chair can evoke such a myriad of feelings? Why did Rochat decide to paint “Vagabond” in this day and age?

It takes courage to be an artist. And in our time of Krakatoa-like proliferation of electronic images, it takes even more courage to paint representationally—with paintbrush in hand, oil paints on the palette, and facing a world in need of truth in beauty more than ever before.

“Here you are alone in your studio, and you have to make something that is deeply meaningful for people,” Rochat said, expressing the sentiment of many artists today who have also been trained in the atelier tradition of the old masters.

Many of those artists, like Rochat, have bypassed the dark ages of the 20th century art education in terms of representational art, with a conviction that they are responding to a social need, despite the viewer’s unawareness of that need.

Beautiful, genuine, thoughtful works of art created by highly skilled artists feed the soul. “I feel like much of modern life does not encourage us to believe in such a thing, but we actually do need it. We live in a culturally impoverished life,” Rochat said.

He suggested that we could be compared to vagabonds or tourists in the sense of how disconnected or distracted we may feel in this century. Referencing the social theorist Zygmunt Bauman, he said, “Bauman postulates that people fall into a continuum between two types, vagabonds and tourists. Both are without a fixed commitment to a place. The tourist freely travels and consumes various places out of desire, but the vagabond moves because of unfavorable circumstances. ‘Tourist’ and ‘vagabond’ are obviously metaphors. This was a fascinating idea for me, so I began to seek out evidence of the fleeting and the temporary around me. Some of those observations turned into paintings.”

People are crying out for a sense of connection, genuine unmediated experiences, and insight. Rochat strongly believes in using the rigorous techniques of a timeless art tradition to further that tradition, while simultaneously contributing to the zeitgeist.

“I take into consideration my circumstances, my surroundings, the things that I really love, and art history too. I have a huge admiration for the past—the loftiness, the beauty, and technical excellence. I try to learn from all of these things in order to create a unique work. I don’t feel I’m attempting to make something that’s deliberately traditional or overtly contemporary either,” he said in his studio at the NYK Academy, in Spanish Harlem.

Rochat studied for nine years at art schools and ateliers—including duCret School of Art in New Jersey, The Art Students League of New York, and the former Janus Collaborative School of Art, which was on the floor above his current studio in the same quaint old carpentry building where the NYK Academy is now.

“I loved learning how to draw the figure, learning anatomy, and things like that, so much that I just stayed very focused,” Rochat said. For him painting feels imperative now.

“If I wasn’t painting, I probably would start to really shrivel. One of my first teachers said, ‘I don’t really do this because I want to, but because I have to do it.’ I certainly do it because I enjoy doing it, but I also think the more you get entrenched in it, the more you learn, the more you understand, the more you start to realize that it becomes a part of you, and in some ways it is an extension of yourself,” he said.

Nine years of study may seem like a long time, but before the 20th century fine art education was seriously respected. The curriculum took a year longer than a degree in medicine. Most ateliers scattered around the world today have compressed that education to four years to suit the conditions of this century, according to Daniel Graves, the founder of The Florence Academy of Art—one of the leading organizations of the atelier art movement.

Rochat’s demeanor shows all the qualities of a young gentleman—polite, thoughtful, somewhat reserved, and very much at ease in conversation.

Now 31, he grew up in Gladstone, a small town in New Jersey known for horse shows and golf. “I didn’t feel entirely complete until I came to New York because all of a sudden you are surrounded by people, who may be very different from you, but they are very passionate about what they are doing, and they want to talk about it,” he said.

“Often times I go out of the studio and talk to people. I observe them in their natural environment. It feeds so much into my artistic expression. There might be a moment when someone does something or says something that stays with me, and I start to wonder: Why did that have such an emotional power? And later I try to flesh that out in a painting,” he said.

One could imagine Rochat’s 19th century equivalent, a flâneur and a gentleman adept in the art of conversation. But at this time, his experiencing life seems more like vacillating between a vagabond-like existence and a tourist, he implied. The challenges for artists are pretty much the same in any century—how to balance time between creating and getting your work out into the world to be able to make a living. It takes courage.

Caravaggio, Vermeer, Andrew Wyeth, Hammershoi, and the recently deceased Charles Pfahl are some of the artists who inspire Rochat. He talked at ease about them. “Only a really great artist can say everything without saying anything at all. A great image in writing or poetry implies all of those meaningful things without actually literally saying them,” he said.

“The object and the scene becomes the catalyst for a higher degree of contemplation, which I love, for example, in Andrew Wyeth’s paintings, and I want to make art that does that, rather than just a depiction of something that is attractive or even ugly for just being ugly,” Rochat said.

Rochat composes his paintings mostly in his studio, his apartment, and in the Salmagundi Art Club where he’s a member and where his portrait of the club’s president, Robert W. Pillsbury hangs by the central stairwell.

“I’m a really big believer that I should be able to make a painting no matter where I am,” he said. He frequents the Salmagundi Club, enjoying it as a refuge for reading and casually conversing and exchanging ideas with other artists.

He works on several paintings at a time. Lately, he has been focusing on painting people in interiors—a woman standing before a doorway, looking into a kitchen with her back to the viewer, or a woman sitting on a couch, perhaps waiting or contemplating. “I want to capture a moment, as if you’re either leading into something, or in the middle of something, or just come upon something,” he said.

He’s also working on a couple of portraits, and enjoys the back and forth of painting commissions and meeting expectations, while at the same time creating something that is stirring. He recently started teaching a foundation art class at the Teaching Studios of Art at Oyster Bay on Long Island. The commute is rather long but he likes it because it gives him time to read—novels, poetry, and philosophy, which also feeds his creative expression.

In one of Rochat’s finished paintings, a knife and fork rest on a clean rust-orange plate, next to a teakettle in half shadow on top of a rustic wooden crate. It invites a myriad of questions, draws you into a story of your own making. It may evoke a memory, an emotion not yet fully expressed—perhaps of something ugly on the edge of your consciousness, lurking and waiting to be acknowledged.

His painting is not a straightforward illustration. “Maybe in that painting of the plate there is something of a launch pad for a narrative, but I want it to be open ended,” Rochat said.

The simplicity of the composition is arresting. The time, dedication, and skill with which Rochat created it, focuses your attention. There’s generosity in art made that way, inviting us to experience life more deeply, fully, instead of getting lost in distraction.

“I am a really big advocate of studio training, working every day from life and from a live model, largely because it forces you to confront your visual experience. When you begin, your drawing looks nothing like the model and you start to realize what little understanding you have about what is right in front of you. Only through careful study are you able to draw with competence and become an acute observer. Learning to draw is an intellectual endeavor as much as it is a craft.

“Sometimes I wonder if the way current technologies are used to provide instantaneous imagery is separating us from this intellectual confrontation and causing us to be more passive about visual things. Having the opportunity to spend years in a studio honing your skills and mind is invaluable,” he said.

Rochat titled that painting after one of his favorite collections of poetry, “Light for the Orphans” by Wilmer Mills. “The collection is about people who are kind of outcast, who suffer from some type of social malady in their lives, but Mills deals with them so sympathetically,” Rochat said.

Regardless of the melancholy and solitary feeling his paintings evoke, they do not feel empty. They are soothing. “In solitude, there’s usually time when you are thinking mostly about the reason why you are alive, and why anything exists, or what is good, what your hopes are, what your fears are, and I find places and pictorial devices to convey those moments. If you do that effectively, people know exactly what you are saying,” he said.

In thinking of possibilities, codifying emotions, and creating meaningful images, Rochat paints, despite external pressures, with dedication and curiosity. We are grateful for that spirit of courage—especially in these times.

Edmond Rochat’s paintings can also be seen at the Cooper & Smith gallery in Essex, Connecticut. He also does commissions.

This Is New York” is a feature series that delves into the lives of inspiring individuals in New York City. See all our TINYs here: epochtim.es/TINY or follow @milenefernandez on Twitter or @milenejf on Instagram.