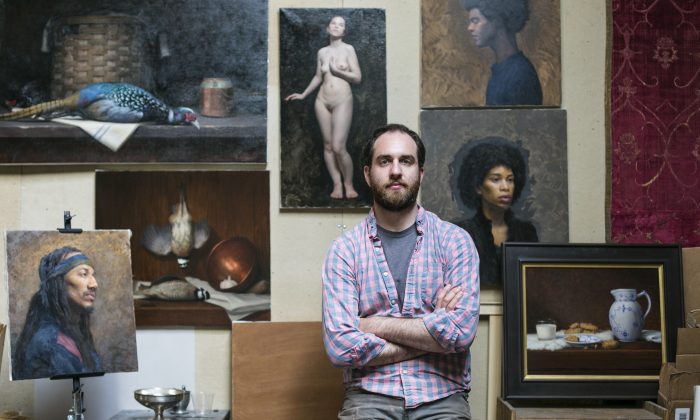 NEW YORK—Brendan Johnston likes to keep his artistic choices open and varied, yet steady. The young artist has calibrated his internal compass to keep him on course in the artistic tradition of the old masters, and yet he’s perfectly at ease with not knowing yet exactly how he wants to distinguish himself. His confidence rests in the search, in little discoveries, in that stirring process of refinement toward mastery.

“How do you treat contours? Do you create a sense of more movement in the figure by having multiple undecided contours, or do you decide on a finished one?” he asked rhetorically. “In one portrait I might want to do a very tightly rendered profile with a precise line. Maybe it’s the model who inspires that. Or I might want to do one that is more structurally based with a little bit more of a Russian influence, and then I might try to do something in the middle,” Johnston said.

He spread a portfolio full of drawings on the floor of his studio space at Grand Central Atelier, where he teaches and works as an artist in residence. Each drawing revealed his exquisite skill. He had drawn Michelangelo sculptures that he luckily had permission to spend time with for weeks in the Medici Chapel in Florence.

“I love trying to access these cultural objects from as many angles as possible. To understand Michelangelo’s works you have to do it through drawing, sculpting, and art history. My goal was trying to understand what went into making those sculptures and the mind behind them. That experience was just absolutely incredible,” Johnston said. “My big thing with Michelangelo was trying to access his mind,” he added.

A Life Immersed in Art

Johnston has been immersed in fine art ever since he can remember. He grew up living just five blocks from the Metropolitan Museum of Art. He has visited so often that he almost considers The MET an extension of his own living room.

As a child he had a deep desire to become a fine artist, but it took some time for him to find the place where he could fully dedicate himself. After earning his degree in art history at McGill University in Montreal, he tried several fine art schools for short stints—with differing degrees of satisfaction or dissatisfaction.

“I had a clear idea of how I wanted to go about doing it. Through enough looking [at art and schools], I knew the right type of education that would be needed to create the kinds of paintings I was interested in,” he said.

Through a friend of his father’s, he met an alumnus of the Florence Academy of Art, Andrea J. Smith. She taught him cast drawing and introduced him to the atelier art world, when she was running The Harlem Studio of Art. “She helped me to train my eye very well. She was really rigorous in getting you to see differences, to replicate values,” Johnston said about Smith.

Recalling his first impression of GCA Johnston said, “It was packed full of young people who were very hungry to learn. The language the teachers were using to explain what is going on in the physical world was very precise. They were good at communicating; they were enthusiastic, and energetic—grappling with these very complicated difficult concepts and methods. The bar of expectation was extraordinarily high, and I realized it was something that I could throw my whole self into.”

At GCA Johnston started learning more rigorously how to understand the real physicality of the three dimensional object, how it moves in space, and how to model form. Copying masterpieces was just one aspect of his training, requiring much awareness.

On average people may look at a painting for just over a minute. When Johnston studies one of his favorite works he may look at it for about 15 minutes, but if he would copy that same painting, he would spend at least 300 hours looking at it. “Painting is essentially educated seeing because you consciously have to absorb the subject, make sense of it, and then make complex decisions about it,” he said.

Johnston may start the day drawing or painting and end the day sculpting. He and Jacob Collins, the artist and founder of GCA, sculpted side by side during a model’s first sitting for the sculpture they had started that day. Both expressed how much they enjoyed the change of dynamic, going from sitting or standing still while painting to moving around while sculpting.

They would add small balls of clay at a fast pace, occasionally pausing to make a quick measurement. The level of concentration and quiet energy in the studio was thick and invigorating. Johnston and Collins looked as if they were wrestling with each other in a friendly match, but instead they were wresting with creating their own sculptures of the model’s head, as fast, as accurately, and as artfully as possible.

Johnston expressed how working in one mode or genre could unlock the hurdle of another. “Each one offers something different. Each one has a certain limitation and frustration for me, so working on the next one is a desire to find a different approach to grappling with the limitation of the previous one,” Johnston said. For example, once when he was sculpting a model with beautiful olive skin, he suddenly realized he would not be able to represent the skin tone in the sculpture.

While he varies his subject matter or medium, all of his works are integrated by the same intention of deeply connecting with whatever he chooses to draw, paint, or sculpt.

“The works that I really respond to are the ones that I see as profoundly connecting to life, and that can be varied. … I am interested in looking for how to connect with nature, with people, whatever the subject may be,” he said. “Art ought to correlate to life, or somehow reflect or deeply relate to life. There has to be some aspect of some moral quotient because I think you have to try, on some level, to be a good person and therefore that extends to fine art,” he added.

Atelier Movement of This Century

Johnston summed up, to some extent, a common denominator of the atelier art movement. Although marginalized from the mainstream art scene and market, it continues to evolve while reaffirming a timeless tradition. The atelier art movement coexists in time but not in sensibility with contemporary art.

Following the old masters, the sensibility of atelier artists is rooted more in processing emotions in a measured way and in making more conscious decisions, than in giving feelings free rein to be spattered about without much thought. “It’s a complex variety of different things that an artist is going through and dealing with, but if you are sensitive to it, you can access that sort of intelligent mind struggling with certain pictorial and sculptural problems,” Johnston said about the old masters.

Looking back at his art history studies, he remembered that the more he would study modern and post-modern contemporary art the more disillusioning it became.

“The artist that I am let down by would be the ones who are interested in mocking or destroying the past, or those who use art as a marketing ploy. That’s when I check out,” he said. “Andy Warhol in some respects was really on to certain things that were occurring in the culture, so I enjoyed reading and thinking about that, but there was also a sneaking suspicion in my mind that his work is not all that profound, there is always some aspect of it being a little bit of a joke,” he added.

Once Johnston started to make fine art, especially in connection with GCA, it was as if a veil of pretense had been lifted. It became much harder for him to go into contemporary art museums. “That sort of suspended disbelief—that a series of colored panels, for example, was chasing after something really important or deep—was gone. That doesn’t describe aspects of life that I think are worth expressing or thinking about or spending huge amounts of time on. The human mind is suited for something far more profound to contemplate,” he said.

Johnston expressed his nostalgia for the past, but then pointed out that it’s consistent with the tradition. “I think Michelangelo went through the same thing. The majority of what he made was nostalgic for Antique Statuary. And in the 19th century Ingres was enormously nostalgic for Greek and Roman statues. He ran the French Academy in Rome for a while, and I think it’s a little bit the same with us, too—nostalgia for the old masters. But we are even further away in time, and now it’s even revelatory to be able to represent life. I love it,” he said as his eyes sparkled.

Brendan Johnston’s current work will be included in a group show at Eleventh Street Arts in Long Island City, on April 15 to June 3.