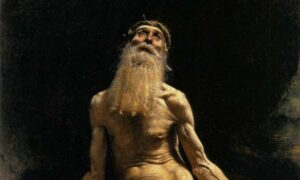 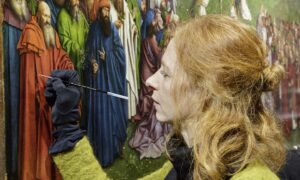 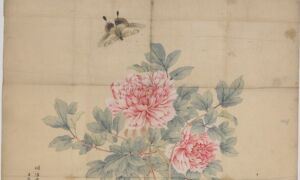 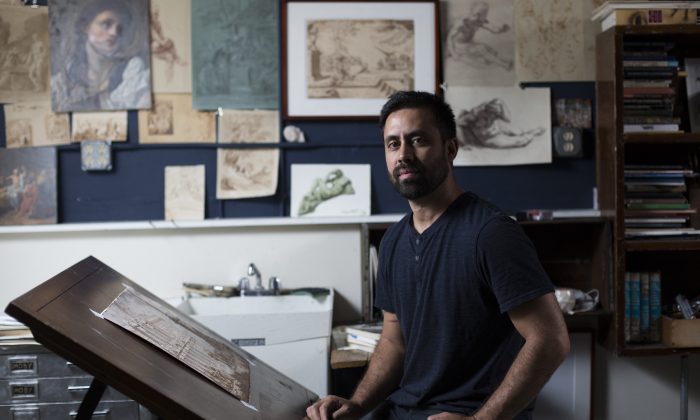 NEW YORK—Civilizations rise and fall over millennia, leaving ruins. Then nature takes over. Vegetation grows between scattered pieces, remnants of forgotten cultures. It’s a theme draftsman and painter Anthony Baus finds appealing. At first glance his pen and ink wash drawings conjure images of ancient Greece or Rome, or something like a Tiepolo painting bursting with grand gestures and drama. But then looking through his work, you notice a Manhattan building of the Gilded Age, or the Bethesda Terrace in Central Park, or a bicycle in a scene that seems to be of a time before bicycles were invented. There’s an old feel to his work, but it is not necessarily nostalgic.

“You can ask yourself: What does a drawing of today look like?” Baus said in his studio at the Grand Central Atelier (GCA), where he teaches perspective and design. “I don’t want to do something that has already been done, or that is specific to a certain time period, but the existing language of art is important for me to explore.”

Yet Baus’s artistic style is unapologetically traditional. Apart from the numerous old masterworks he has copied as part of his training, he seems to intuitively know that we cannot escape the time we live in, any more than we can get out of our own skins.

Growing up in Wisconsin, Baus started to show a natural talent for the arts at an early age, constantly drawing cartoons and other things that would catch his interest. He received his BFA from the University of Wisconsin–Milwaukee, where there was an absence of classical or realist training in the arts. Only later, in a circumvented way, did he begin to fulfill his artistic calling.

For about three years he worked at a salvage company, Urban Remains, with Eric Nordstrum, who also founded the BLDG. 51 museum in Chicago. At that time, Baus was looking at ruins, going into buildings that were about to be demolished. He would salvage ornate architectural artifacts, antiques, and other artful remnants from old houses, commercial structures, old theaters, and movie palaces of the early 20th century.

Those artifacts started to pique his curiosity in art history. “I couldn’t tell you before who painted the Sistine Chapel,” Baus said. “I knew a couple of famous names, like Michelangelo and Raphael, but I couldn’t tell you what they did.”

Later when he started studying at GCA, three colleagues—Victor Chong, Abigail Tulis, and David Troncoso—influenced him. “They were all looking at books of Renaissance painters that I thought were so fascinating. I was always looking over their shoulders,” Baus said.

He started his search for deep roots, to find meaning and answers through his art. It was as if he was in a time machine. The further along he studied, the further back to the source of artists’ influences he would try to discover.

“There’s something that you can gain by contemplating an old master painting—sitting in front of it, staring at it, and coming back to it later. I haven’t figured it out exactly, but there is always some hidden meaning, a narrative, or technical aspects that I want to investigate,” Baus said.

Anchors for the Imagination

Baus gradually started to piece things together, “sort of like a mad scientist, ” he said. It’s an ongoing process of creating visual clues and narratives—an entire theater of his inner world, reflecting his discoveries with fluid lines and effortless-looking contouring. It takes a higher level of skill to invent a scene and to draw or paint it realistically.

“I use my imagination, but I also use conventions,” Baus said. “It’s always helpful to be able to create a deeply believable space where things have gravity and weight. With knowing perspective, you have a lot of malleability. … It gives you more freedom because then you are not tied down to representing the exact thing that you see.

He forms his repertoire by directly drawing from live models at GCA, by copying old masterworks, or by drawing or painting 19th-century plaster casts of original works dating to antiquity in the cast hall of the Institute of Classical Architecture and Art in Midtown.

His usual quiet demeanor gives way to animated talk whenever he explains the meaning of his drawings. One of them, titled “The Allegory of Nature and Artifice,” shows a figure on the right side who is drawing a curtain to reveal a landscape, to remind the artist, whose back is to the landscape, to turn to nature for inspiration. As the artist starts to look at nature, the figure on the far left, representing artifice, lying on the ground and leaning on a camera obscura, “starts to lose steam, like he hasn’t eaten in days, he is sort of neglected in the corner there,” Baus explained.

“My take on the story is maybe obvious. I’m siding with these two over here,” he said, pointing at the figures representing art and nature.

Then he showed his ink and wash studies for a possible larger painting, depicting two different versions of when the 13th-century painter Giotto met his teacher, Cimabue.

“I like to think of Giotto as an ancestor. If I’m a painter, I should know what painters before me did and why they did the things they did,” Baus said. “Many people don’t know about Giotto, except for the famous people who came after him in the Renaissance.” Baus thought it was a perfect example of something he could depict to educate the public, to show the first artist who served as a transition into the very beginnings of the Renaissance.

One version showed a straight narrative of Giotto as a young shepherd, drawing his sheep on a rock, as Cimabue inadvertently walks by, discovering his soon-to-be apprentice who would later surpass him. In the second version, Baus shows Giotto also drawing on a rock but sitting on clouds suspended in midair by a group of cherubs. Comparing the two versions, Baus said the one with the cherubs is more fun and exciting. He often takes votes from the other resident artists or students at GCA to decide which of his studies he will commit to a larger painting.

The story dictates the composition. “It gives me a reason to put this thing together; it’s a way to educate myself, and I also get to share these stories with other people when they look at my drawings or paintings. That’s when my work is really completed … that’s the full experience,” Baus said.

He went on to explain the elaborate details embellishing a drawing he started in Rome over the summer of the Santa Maria Maggiore (once known as “Our Lady of the Snows”), which he was finishing in his studio. It includes four candelabras, as a reminder that the church was built in the fourth century; a fifth one to remind him that the church burned down and was rebuilt in the fifth century; some characters that look like bandits; pieces of wood from Jesus’s manger; some devoted followers; a dead body being carried into the church; and a series of other details that piece together a collection of legendary anecdotes—all on one piece of paper. It keeps your eyes moving throughout, awakening your curiosity and imagination.

At a time in history when anything goes in the art world, one of the biggest challenges for Baus is trying to decide on the subject matter and on the stories he wants to tell. In the past, when religious art prevailed, artists already had a predetermined repertoire to focus on, depicting for example the holy family in the West, or Buddhas, Taos, and gods in the East.

Today it’s more challenging to find themes that will appeal to different kinds of people. Baus asked himself, “What are the stories that masses of people are going to relate to and that they are all going to enjoy? … It would be nice to reach more people,” he said in a contemplative tone.

One of the first old masterworks he discovered was Raphael’s “School of Athens” fresco because “that’s one of the greatest hits of painting,” he said.

He wants to do more public work and is in the process of thinking about it—perhaps something akin to a large Raphael fresco or a Tiepolo-esque ceiling mural, done in a fashion that would be relevant today.

“I have been thinking about how painting fits in architecture and where that relationship exists today,” he said. When he goes into The Met or into the New York Public Library on Fifth Avenue, he sees a lot of potential wall spaces within the architectural design that are suitable for big murals for large audiences. He hinted that it could take a lot more work and patience to realize his dream project of a large painting in a public space.

“This Is New York” is a feature series that delves into the lives of inspiring individuals in New York City. See all our TINYs here: epochtim.es/TINY or follow @milenefernandez on Twitter, @milenejf on Instagram.