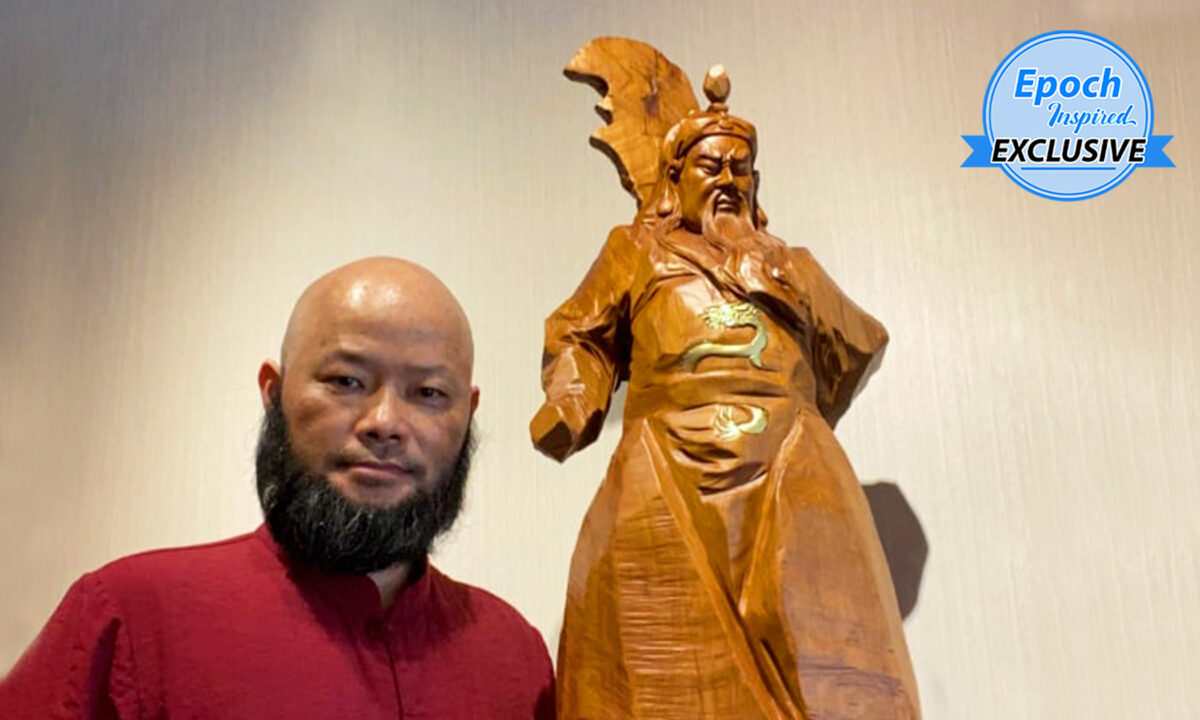 Art That Expresses Kindness: Wood Artist Hopes to Create the Right Influence With His Work

'Art should be bright in order to awaken people's kind side ... as kindness can change people's thoughts.'
BY Daksha Devnani TIMEApril 29, 2022 PRINT

Embracing the unique color, texture, and shape of every piece of wood, a Taiwanese sculptor has created hundreds of carvings that all have a story to tell.

For the past 30 years, Tsai Mingfeng, 49, has been crafting outstanding wood sculptures, chiseling and hammering conscientiously to express the righteous principles of truthfulness, compassion, and tolerance in each of his works of art.

Tsai believes art can have a profound effect on people, and to achieve this desired purpose, it must express itself and connect to people in a righteous way. Referring to the many modern art forms prevalent today, Tsai said art has lost the traditional touch and instead seems to be infected by negative messages.

“Art is by no means incomprehensible, and it doesn’t need to be explained,” Tsai told The Epoch Times. “Coming across good art is like meeting an acquaintance, and everyone from children to the elderly will understand it and be moved or happy when they see it.”

Tsai, who has won several accolades in his arena, said it’s his faith that has guided him in each of his creations.

Growing up, Tsai was headstrong and had his own opinions about everything. He wanted to be different from the people around him and became a loner. At the age of 15, he left his home in Sanchong to study woodcarving in a factory in Hsinchu city, where he attended classes at night at a local art school.

After about a year, he dropped out because he wasn’t learning many carving techniques. Almost two years later, Tsai met Huang Hongyan, a renowned local woodcarving artist, and rose to become one of his favorite students.

Tsai said each piece of artwork is a new creation. He doesn’t want to create the same thing every time, and that also makes his job more difficult.

Sharing his secret to inspiration, Tsai said many of his carving skills and new ideas come from the self-cultivation discipline of Falun Gong, or Falun Dafa, which consists of five gentle exercises along with moral teachings based on the principles of truthfulness, compassion, and tolerance.

“I thought of many new ideas while meditating,” he told The Epoch Times.

During the rainy season of 2004, Tsai, who was then in his 30s, came across an advertisement on television about mind-body health. Learning that the system was practiced by millions in more than 100 countries worldwide, he decided to learn Falun Gong. Tsai said that after reading the teachings, he felt that it was what he’d been looking for his whole life.

“After cultivating my inner self and living by the moral principles of Falun Dafa, my view of things completely changed,” he said. “I no longer feel angry and have stopped being greedy, competitive, or calculating; the good changes in me have also led those around me to feel good.”

The most noticeable improvement in Tsai’s personality was his calm and composed demeanor. In the past, due to his irritable nature, he often found himself quarreling with others. Apart from developing a heart of compassion, he also found himself caring less about his own self-interest and becoming humble. With this, he said, he stopped chasing unrealistic goals in life.

“The heaviness I used to experience has now disappeared, and I feel an uplifting sense of calm, both mentally and physically,” he said.

With the transformation in his temperament came a breakthrough in his woodcarving career.

In 2013, Tsai set up a factory in New Taipei city. Having his own business, he found more time to work on his art.

Tsai not only works pieces of wood, but also roots. Carving on roots gives him a deeper understanding of life, he said. Roots form the foundation of plants, and healthy roots help the plant grow better. He said one should never forget one’s roots, while working hard is an inevitable component of success in life.

Besides sparking the breakthrough in his career, Falun Dafa has deepened his wisdom, he said, which has in turn led to him making inroads in his woodcarving skills. He believes that the way artists behave in daily life affects their artwork. “When my temperament improved, my woodcarving skills improved, too,” he said.

As an example, Tsai said that when he outlined General Guan Yu’s posture, he got stuck and didn’t know how to carve the eyes in a way that would embody righteousness and majesty. Similarly, when he worked on a piece depicting three pigs, he faced the challenge of how to carve their adorable faces. He said it was while meditating that he got the inspiration for how to carve the sculptures.

‘Use Wisdom to Create Righteous Influence’

The talented artist especially excels at carving animals. He said the Taiwanese people enjoy woodcarvings of pigs, as they symbolize auspiciousness.

Tsai said that as an artist, he has a responsibility to contribute positively to society and understands that works of art must influence people in the right way. He believes he mustn’t be impatient while working on his sculptures, because if an artist’s emotions are unhealthy, that can “cause the opposite effect and destroy the harmonious energy.”

“I have to use wisdom to create righteous influence,” he said.

“The more an artist’s thoughts are focused on fame and fortune, the more warped the expression of art is. The morality in this depraved era has been deteriorating quickly, and the artwork is getting darker. Art should be bright in order to awaken people’s kind side. I hope my art can express kindness, as kindness can change people’s thoughts.”

In 2021, Tsai and his teacher Huang Hongyan participated in a teacher-student joint exhibition held by the Taoyuan Department of Cultural Affairs.

“I personally think it’s very meaningful for teachers and students to exhibit together,” he said. “It not only represents inheritance, but also a kind of respect the student has for the teacher. The greatest achievement of a person is not fame and fortune, but the ability to appreciate and cherish.”

Over the course of his career, Tsai has produced many pieces depicting the persecution that Falun Gong adherents face in China, representing various themes such as “freedom,” “longing,” and “evil cannot prevail.”

Falun Gong was first introduced in China in 1992, and by the late ’90s, around 70 million to 100 million Chinese people were practicing it, according to official estimates. However, in July 1999, then-Chinese Communist Party (CCP) leader Jiang Zemin launched a nationwide propaganda campaign and persecution of the spiritual practice. In the past nearly 23 years of suppression, countless Falun Gong adherents have been detained, imprisoned, tortured, and even killed for their organs.

Tsai said that in witnessing such a crime against humanity, his heart is pained.

“Chinese people suffer the most directly from the CCP’s persecution of faith and its abuse of human rights,” he said. “These kindhearted people who can’t defend themselves are persecuted to death, and this deeply pains my heart.”

Tsai said people should remember that evil cannot win over righteousness and that it’s important to stand with goodness and justice.

The artist said he wants to further sharpen his skills with the wisdom gained from following the principles of truth, compassion, and tolerance. “If life is a work of art, the most important element is self-cultivation,” he said. “Cultivating oneself is like hammering wood before it can be given the final desired shape. Without cultivation, our lives would lack substance, and we could never achieve our true purpose.”

Jocelyn Neo and Arshdeep Sarao contributed to this report.