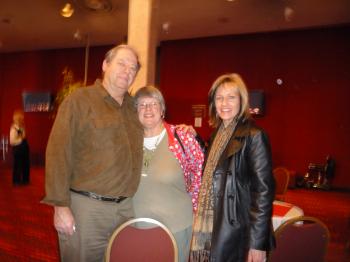 Luke Buthman
View profile
Follow
biggersmaller
Print
SAN DIEGO—The Divine Performing Arts International Company successfully completed its fourth and final show on Sunday Dec. 28 at the San Diego Civic Theatre. During intermission we had a chance to talk to Ms. Boheme, an art educator of a school district in Nevada, who came with her parents, Nancy and Don.

According to her, the show displayed the values of traditional Chinese culture.

“One aspect of it was that it was so diverse. Because there were so many different aesthetics, you had the Himalayan Plateau aesthetic in the last piece, and then you had the Indian Buddhism, the Shakyamuni Buddhist, which is sort of different than some depictions of Buddha.

“And also being able to have religious references, which I don't think are so welcome in modern day China. And references to spirituality, and mixing that into the dance performances.

“Being able to reference this just massive, massive history with poetry and everything from Confucianism to Daoism, so many different eclectic things. They are all pretty clearly expressed in the dance pieces that we saw.”

Being an art teacher, Ms. Boheme noticed some unique aspects of the Divine Performing Arts style and choreography. Her background in watching many productions in Las Vegas and San Francisco also gave her a good sense of quality.

“Dancing is how you survive, it is the spirit," said Nancy. "When things were going bad for me and Don, we would say 'Let's go dancing!' There's more to it than just the technical; there is the spirit, and that's what makes the Chinese survive for centuries. It's what's inside.”

Ms. Boheme also noted the unity and harmony involved in the dances.

“The way the fabric was used and the costumes, that was such an important part of that unity, because even if the dancers weren't physically touching, the fabric would come together as part of the choreography.”

When asked about the message she saw in the dances, she said, “It was real celebratory. And then you had that one piece, the persecuted father ["Persecuted on a Sacred Path"], which was the most positively intense piece of dancing I have ever seen.”

“I have a doctor who defected when she was working at the diabetes clinic in Harvard in an exchange program. She saw Tiananmen Square on television, and she defected. It took five years to get her husband over and 15 years—she didn't see her son for 15 years!”

Ms. Boheme said, “To be able to have that sense of physical endurance you would have to be motivated by more than 'I'm going to dance a really great dance.'”

The Epoch Times is a proud sponsor of the Divine Performing Arts 2009 World Tour.
For more information please visit DivinePerformingArts.org