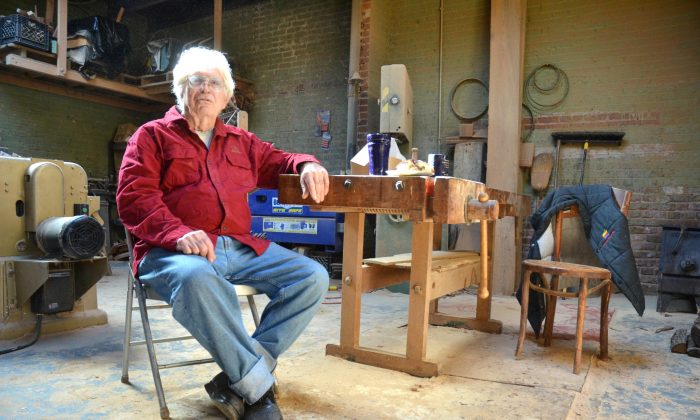 Sam Forrest on Nov. 21, 2015, at his Brookland Park Boulevard shop in Richmond, Va., where he made his latest collection of furniture. (Zachary Reid/Richmond Times-Dispatch via AP)
Arts & Culture

Art of Fine Furniture: Carving an Elegant Form of Expression

RICHMOND, Va.—Sam Forrest stepped around a couple of pieces of furniture so he could reach a window in the front of the old gas station he has turned into his latest studio.

He stopped for a moment to look out at Brookland Park Boulevard. The street is just a few steps away, but the action there, on the other side of the glass and a chain-link fence, is a world away from what happens on Forrest’s side.

“People walk by all day, but no one ever stops to look in,” he said. “I don’t think anyone really knows what this is.”

It’s hard to believe until you walk in and see it yourself.

What happens in his studio is a magical blend of craftsmanship and artistry.

Forrest calls himself a furniture maker, but he’s just as much an artist, the creator of one-of-a-kind pieces that look like museum specimens. His most recent collection includes 30 pieces: mostly tables and cabinets, plus a pair of matching floor lamps that combine the grace of Tiffany’s best work with the beauty of reclaimed old Southern pine.

Those pieces will be on display through Dec. 16 in the lobby of the Richmond Times-Dispatch. The opening coincides with Richmond’s First Fridays art walk, but the collection is of such size, and stature, that it will remain in place two weeks.

“Sam has a really distinctive style. You can recognize his pieces. I don’t think anyone else in town does what he’s doing.”

The 79-year-old Forrest has been doing what he’s doing in bits and bursts since the late 1960s, when he walked away from a job as a probation officer in the Fredericksburg area and found his way to Virginia Commonwealth University. At the time, VCU was expanding its crafts program and Forrest was looking to use the rest of the money he had coming from his G.I. Bill.

He struck up a friendship with a professor, then started taking classes and making pieces.

“I discovered this talent I never knew I had,” he said.

He left school after about a year—”I got from it what I could,” he said—and bought a carriage house in Church Hill. He made furniture on the first floor and lived on the second.

Over the course of several years, he made, and sold, about 80 pieces. No two were quite the same and he brushed aside suggestions that he find a way to manufacture his designs.

“This is about a feeling,” he said. “It’s about getting in touch with your genetic being. These pieces are who I am.”

The approach allowed him to maintain the authenticity of his process, but the process had its limits, and by the mid-1970s, he was done.

“I exhausted the well.”

He said whatever time it took him to make a piece, he needed that much to recover. “If I spent 10 days on something, I needed 10 days to walk, hike, do something else.”

Furniture as Art: Balancing Your Home With Unique, Timeless Pieces
Canadian-Made Furniture, From Classic to Modern

After what would be the last break, he said he knew it was time to move on. He sold his shop, bought a boat and set out “to do some adventuring” in pursuit of something he’d twice failed to accomplish before: circumnavigate the world.

The third time, he made it to Port Said, Egypt, before turning back.

Success wouldn’t come until his fourth try, years later, but on that third trip, somewhere in the middle of the Atlantic Ocean, he found a clarity that has come to define his life ever since.

“I got caught in a storm, and it was so bad, all I could do was brace myself,” said Forrest, who’s a Zen Buddhist. “For a day and a half, I don’t know if the boat rolled or not. I was huddled in a corner. I welcomed death. That gave me power. Once you realize you have power over fearing death, it allows you to see things more clearly.”

When he got home, he bought an abandoned rock quarry in Louisa County and set up a shop. His first inclination was to build a Buddhist temple.

“I’m altruistic,” he said. “I thought I could do a service for the community.”

It turned out to be a service the community didn’t want.

“There was zero interest,” he said.

With a shop full of tools and no temple to build, he started making furniture again.

He also started feeling lonely and began looking for a way out of Louisa.

“It was beautiful, but I couldn’t fit in,” he said. “I’m a social person. I’m not always the easiest to be around, but I need to be in a city.”

How an Architect Beautified His Industrial Tribeca Loft, Furniture and All

How to Pair Fine Art and Furniture

By the time he got back to Richmond, he’d made another three dozen pieces, which he sold through the store La Difference.

About three years ago, he said, he realized it was time to work again. “I work by inspiration.”

He was inspired by the destruction of a warehouse in the Carver neighborhood, behind VCU’s basketball arena. He was told he could have all the lumber he could take if he took it immediately.

From that came the pieces that he turned into the lamps, a rare example of duplication in his career.

“I can’t make two pieces the same,” he said. “But I knew I wanted two lamps, so I made them side by side. I’d cut a piece for one, then a piece for the other. It wasn’t going to work any other way.”

The lumber also yielded a pie safe, a fish salting chest and a huge, round table.

From other wood—mostly cherry, oak and walnut—he has made other pieces.

“I’m at my peak,” he said. “My eyes and my hands are slower, but my mind is working as fast as ever.”

His goal now is as firm as ever: “permanence and elegance.”

“You look at modern art, and so much of it doesn’t pass the eye test,” he said. “If it doesn’t look good, who cares who made it or why? It’d be like listening to classical music without the sound. Art is visual. It has to look good.”Art of fine furniture: Carving an elegant form of expression.