Aerospace Scientist: 'I have particular appreciation for the spiritual message'
0 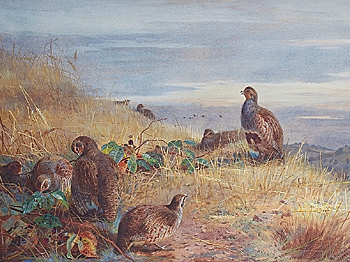 LOVE OF BIRDS: A painting of partridges by Scottish artist and bird conservationist Archibald Thorburn, 'The Covey at Daybreak' is a highlight of the 19th Century Paintings auction on Jan. 27, 2011, London. (Courtesy of Bonhams)
Arts & Culture

By Evan Mantyk
Print
NEW YORK—In the twilight of early morning, a partridge and its fellow birds behold a magical moment: daybreak.

This beautiful scene painted by Archibald Thorburn (1860–1935), former vice president of the Royal Society for the Protection of Birds, is now estimated to fetch $150,000 to $240,000 at Bonhams auction house in London at the 19th Century Paintings sale on Jan. 27.

In April, seven Thorburn paintings sold for a total of $540,000. Two of the works more than tripled their pre-sales estimates, showing a strong demand for Thorburn’s works on the market.

“Following on from the success of the Thorburns in our April sale, I am confident that this powerful work will prove popular with collectors. It is a remarkable painting which perfectly illustrates the artist’s command of both medium and subject,” said the head of 19th Century Pictures at Bonhams, Charles O’Brien, in a statement.

The painting now up for sale, “The Covey at Daybreak,” is unusually large for Thorburn, measuring 27 inches by 45 inches, according to Bonhams.

The Scottish artist had a life-long love of birds and was highly skilled at producing accurate renderings of British wildlife, including ptarmigan, partridge, grouse, and pheasant.

“He gained a strong reputation among the great sportsmen of the day, including … Edward VI and George V, for his accuracy and attention to detail with regard to the form, coloring and the plumage of the various game birds,” said Bonhams.