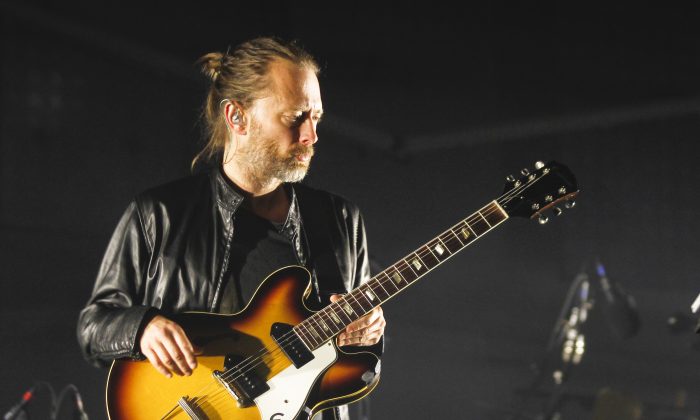 Thom Yorke of Radiohead pulled his solo releases from Spotify in 2013, arguing that digital streaming is destroying the livelihood of artists. (Photo by Jack Plunkett/Invision/AP)
Life & Tradition

Let’s be clear: from Spotify to Pandora, streamed music is killing downloads, and that’s bad for artists and music lovers.

The opposition between art and commerce has been a defining feature of the history of pop music. The countercultural rebellion of the 1960s, to take perhaps the most poignant illustration, was one fully permeated by romantic ideology, by a faith in the possibility of authentic art. The Beatles, the Stones, Dylan and The Doors were never simply performers but artists.

In a world in which almost everything had been commodified, pop stars allegedly remained champions of imagination, desire and passion.

How strange – indeed how mythical – those dreams of the counterculture now look. Musicians might have broken through to the other side – to paraphrase the call to arms by Doors’ frontman Jim Morrison – but it transpires that capitalism was already there and waiting.

The link between music and money has today been raised to the nth degree. Pop stars now routinely promote commercial brands – Bob Dylan famously made a promotional appearance for US lingerie brand Victoria’s Secret and lent his voice to Chobani and the Chrysler in the 2014 Super Bowl. Corporate sponsorship of major artists, such as the Rolling Stones, by multinationals such as Budweiser is a major trend.

There’s also been a surge in corporate-sponsored record labels, such as Converse, Red Bull and Mountain Dew. Music, much like everything else, is just something to be marketed, manufactured, hyped.

Nowhere is this commercial transformation more obvious than the rise of digital music streaming.

In a remarkably short space of time, Spotify has become the second largest source of digital music revenue for record labels across Europe, according to the International Federation of the Phonographic Industry. But note that’s record labels, and not artists, musicians or composers.

Radiohead frontman Thom Yorke was onto this early last year when he pulled his solo releases from Spotify, arguing that digital streaming is destroying the livelihood of artists across the creative industries.

British singer-songwriter Lloyd Cole, of Commotions fame, has stated the problem most plainly in an interview with The Australian:

I asked Lloyd Cole to come to Australia to work with my colleagues at the Hawke Research Institute on these challenges – which are crucial to the future of the Australian music industry and also globally.

We have been crunching the numbers with Cole on the prospects of an artist surviving from royalties on Spotify. Things look bleak, to say the least. One recent estimate is that Spotify pays a majestic A$0.007 per stream.

That translates to 7c for every 1000 streams. Cole’s conclusion is that this is “barely enough to merit making an album at all”.

UK indie artist Sam Duckworth wrote in The Guardian last year that 4,685 streams on Spotify netted him only A$32.57 – the equal of selling two CDs at one of his gigs.

Perhaps this might help to explain why so many emerging artists feel distressed. Perhaps it also explains why a number of established artists – from Brian Eno to Beyoncé – are limiting their exposure on Spotify to sample tracks only.

What it does certainly explain is that artists no longer sell but stream their work. And they do so for far less money than ever before. The entire enterprise looks insanely self-defeating.

At this point, I should stress that this is not a lament for some by-gone age of pop artistry. The global innovations of digital culture are here to stay, and are surely irreversible.

ARIA chief executive Dan Rosen has argued that Spotify adds to consumer choice, expanding the range of options for consumers to access music.

From one angle, he is right. Online streaming services can now be added to digital downloads, free online music and other multimedia options.

But the point is these developments are not feasible for artists and musicians on the ground. In the age of Spotify, artistry is literally under fire.

In our present popular culture of streaming – where the consumer can discard, delete and disconnect at the push of a button – artistry is recast as purely episodic. The artistic worth of music today has been liquefied.

Anthony Elliott does not work for, consult to, own shares in or receive funding from any company or organisation that would benefit from this article, and has no relevant affiliations. This article was originally published on The Conversation. Read the original article.