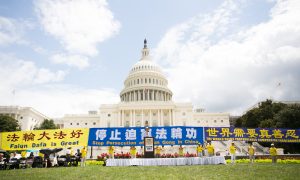 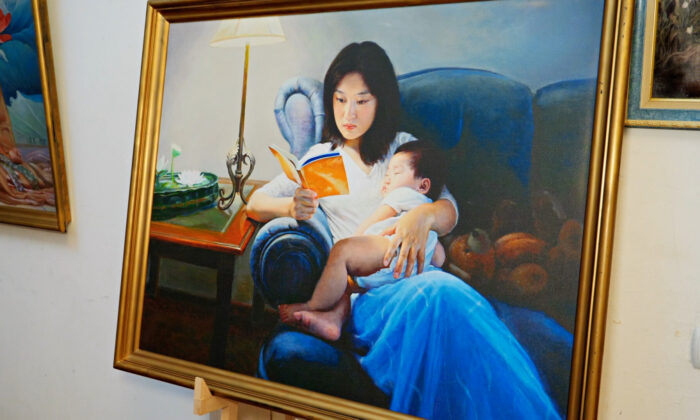 Painting of a woman holding a child and reading a copy of the book "Zhuan Falun" from the Art of Zhen Shan Ren exhibition. (Screenshot/NTD)
Fine Arts & Craftsmanship

The Art of Zhen Shan Ren International Exhibition at the University of Toronto presented onlookers with a glimpse into the beauty and tragedy of today’s China. This inspiring collection of grand artworks painted in the classical style details both an inner spiritual life and an outer human rights tragedy.

The exhibition, translated as the Art of Truth, Compassion, and Tolerance, presents paintings from more than 12 artists with diverse backgrounds, in terms of professional experience, artistic styles, and cultural upbringing.

Hope Chen, who helped to organize the Oct. 16 and Oct. 17 event, was just 6 years old when she lost her father after he got arrested because of his spiritual belief in Falun Gong.

One of the many paintings entitled “Homeless,” depicts a little girl coming home from school. After knocking on the door, she finds there is nobody to open the door for her. She stands outside, with tears rolling down her cheeks.

“After school, I waited for my father to pick me up and walk home together like we did every day,” Chen told visitors at the exhibition. “But that day my father didn’t come, and when I got home I knocked at the door and called my father but no one answered. I kept crying and calling him and knocking on the door,” she recalled.

Chen recounted how through her childhood her father was repeatedly targeted by the Chinese communist regime for refusing to give up his belief in Falun Gong.

Falun Gong, a form of meditative exercise originating in China is based on the principles of truth, compassion, and tolerance. Part of the exhibition is dedicated to showing how the practice of Falun Gong has changed people’s lives, providing them with a return to traditional Chinese values.

The Chinese Communist Party began to suppress Falun Gong 20 years ago in 1999 because of its extreme popularity. Although it is a peaceful practice, the regime saw it as a threat to its power. Part of the exhibition deals with the terrifying ordeals people—including the artists themselves—have gone through.

‘Brightness in the Night’

Paul Li, a Falun Gong practitioner currently living in Canada, said in a speech at the exhibition that the painting “Brightness in the Night” reminds him of the time he and his father would go out to spread leaflets as a way to counter the one-sided narrative spread by Chinese media at the start of the persecution in 1999.

Li said his father is currently in a Chinese prison. He’s spending 13 years in jail for speaking out against the persecution of Falun Gong.

“My father and I were out in the rural area and gave out letters to common people in 2014. As we delivered the letters, three police cars came out. They knew we were Falun Gong practitioners so they just forced us into the car,” Li recalled.

He explained that even 13 years in jail hasn’t broken his father’s determination to help to stop the persecution. Just like the characters in the painting.

“This seems to be a very small simple act, but if you think about it, it takes tremendous courage and strength to even step out the door and do this. If you come to this painting, look into their eyes, now you know the story, the pressure they are facing… but if you look into their eyes there is no fear, there is only compassion and conviction,” Li said.