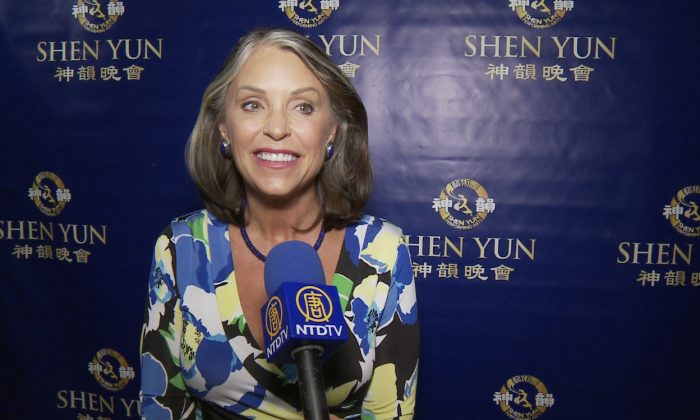 “The dancers, they know how to move their bodies. They make the most of it,” said Ms. Vezolles.

“Between the costumes, the dancers, and the beautiful video backdrop … it’s so wonderfully integrated. It’s beautiful to watch,” she said.

Established in 2006, New York-based Shen Yun is a non-profit organization committed to bringing 5,000 years of Chinese civilization to life through the performing arts. Reaching millions of people with performances each year in over 100 cities, Shen Yun is now widely recognized as a global phenomenon.

According to the Shen Yun website, “In less than ten minutes each, Shen Yun dances recount ancient myths, bygone heroes, or celestial paradises. Whether set in the past or in contemporary China, every dance embodies traditional Chinese values. Ideals of loyalty, filial piety, and veneration for the divine are cherished and celebrated. Heroes are extolled for their compassion and tolerance as much as their courage or determination when facing adversity.”

Another highlight of the show for Ms. Vezolles was the costumes, with one in particular.

“Oh, they’re all beautiful,” she explained, “but whenever they have a swirly skirt and they start turning, that’s really appealing to me.”

As stated on the website, “Shen Yun’s costume artists collect countless designs of traditional attire, ranging from those of emperors, ministers, and generals to the everyday clothing of the common people. They use bright colors to tailor and recreate hundreds of new pieces each season. Every detail is given meticulous attention and is a result of artistic inspiration and careful polishing.“

“Well, it’s something that you have to see because there’re no words to describe it,” said Ms. Vezolles.

“It’s just really spectacular … the sights, the sounds … the music—it all works together beautifully.”