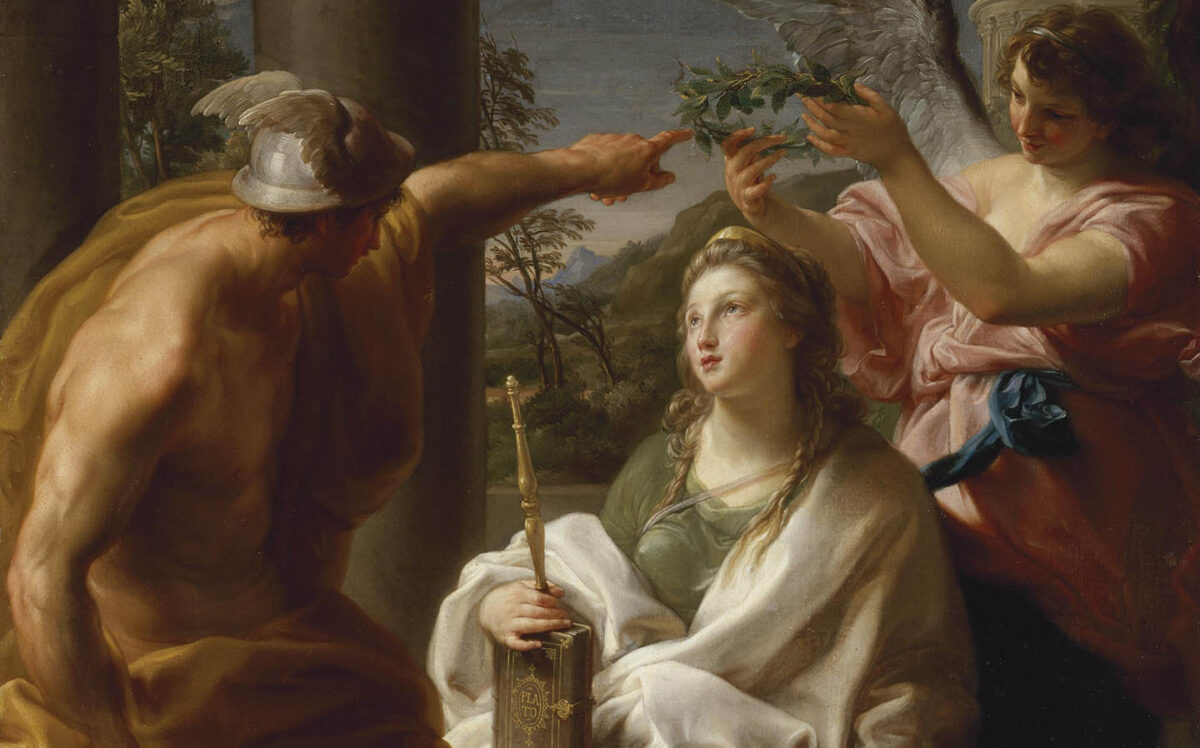 Art and the Love of Wisdom: ‘Mercury Crowning Philosophy, Mother of Art’

Reaching Within: What traditional art offers the heart
BY Eric Bess TIMEJune 5, 2022 PRINT

Twenty-five hundred years ago, Socrates turned the poets away from his utopian Republic. He claimed that the poets were too dangerous because they created illusions that led citizens away from the truth. The antidote he suggested was a philosopher king: a wise leader who would censor the poets and guide them in their creations.

With Nietzsche’s critique of Socrates in the 19th century, Socrates came to be seen as someone who censored ideas and emotion, and therefore limited human potential. Nietzsche suggested that the artist is the one who, having endured the hardships of fate, could create and fashion himself into his own work of art, a self he could be proud of upon his death.

These differing viewpoints lead to the question of whether beauty is objective or subjective. Is there true beauty existing beyond sensuous perception, serving as a standard by which we can judge what is beautiful and what is not? Or is beauty based on our subjective, that is, relative experiences of the world around us?

The Crowning of Philosophy

The Italian painter Pompeo Batoni provides what I think is an artistic response to this question. In 1747, Batoni painted “Mercury Crowning Philosophy, Mother of Art.”

At the far left of the composition, the god Mercury, dressed in yellow with his winged helmet and holding his caduceus (staff), leads our eye into the picture plane. He points to an angel at the far right of the composition. The angel prepares to crown a woman named Philosophy with a laurel wreath.

The focal point is Philosophy. She is modestly dressed, but the golden crown already on her head and the scepter in her hand reveal her royal stature. She holds one of Plato’s books in her hand, and her other hand is open as if she is ready to give or receive something, and it leads our eye to the toddler below her, whom we can presume is Philosophy’s child.

The child sits among artistic implements: paintbrushes, a bust, compass, and a lyre. The child holds a torch in the darkest area of the composition, and the position of the torch leads our eye back up to the angel behind Philosophy.

Batoni’s Response to an Ongoing Question

So, how does Batoni’s painting provide a response to the philosophical question posed earlier? Let’s first start with Mercury.

Mercury is the Greco-Roman god messenger. He relays messages between the gods. The staff he holds is the caduceus, which was given to him by Apollo—god of the sun, beauty, and music—after Mercury invented the lyre. Already, we can see Mercury’s connection with the divine, with art, and with beauty.

Interestingly enough, the laurel wreath is being placed right on top of the crown Philosophy already wears, and we can presume that it will cover and not replace her earthly crown.

Philosophy holds a book by Plato, who was the mouthpiece of Socrates. Batoni is letting us know which philosophy he finds to be of benefit to the arts: It is Socrates’s philosophy that is in the best interest of the arts and of the public.

In this sense, philosophy is the medium by which art presents a divine message. Is this why the child holds a torch in the darkest area of the composition, because he represents the divine message that can guide humans out of the darkness and toward the light of divine truth?

Batoni seems to suggest, like Socrates, that the purpose of art is to exhibit divine messages for the benefit of civilization. The divine, not human experience, becomes the absolute standard by which beauty is judged, and the way to the divine is through philosophy, that is, the study of wisdom, which finds its source in the divine.

Socrates is often accused of censoring the arts because he turns away the poets and the illusions they create. Yet, we cannot practice wisdom without also practicing discernment. That is, we have to say yes to some things and no to others. In other words, wisdom requires a degree of censorship.

So, yes, Socrates may say no to the poets who create illusions, but in the tenth book of Plato’s “The Republic,” Socrates encourages poets to make their case and defend themselves. According to our interpretation of Batoni’s painting, which poets might Socrates admit into the republic? To which poets would Socrates say yes?