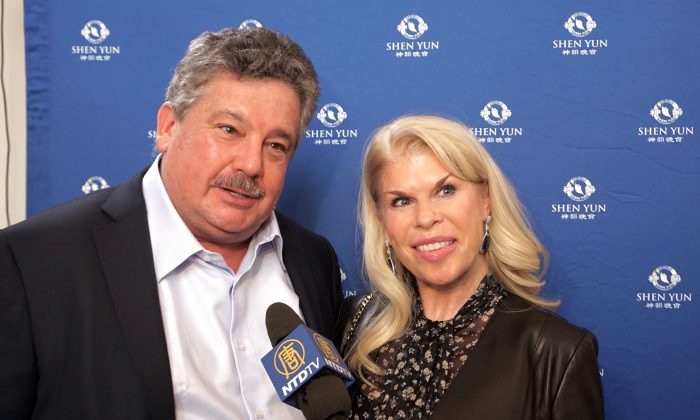 WASHINGTON, D.C.—The ancients believed art was meant to uplift, and turned to the heavens and nature for inspiration. Shen Yun Performing Arts, whose name translates to “the beauty of divine beings dancing,” seemed to encapsulate that idea for audience members at the Kennedy Center Opera House on Feb. 20.

Dana Crummer, a fashion designer, attended the matinee with David Ross, a real estate developer, and was blown away by the unexpected use of color in the costuming.

“The colors, the colors really stand out to me. There’s history to colors, and people don’t really understand what colors can create in a person. Getting to the center of their energy, and just feeling,” said Ms. Crummer, who finds inspiration for her clothing designs from the energy of people.

In ancient China, color was rich with symbolism and used with meaning in all facets of society. They aligned to traditional values like benevolence, righteousness, and wisdom—values that were important to a spiritual civilization that believed its culture was divinely inspired.

This is the culture that New York-based Shen Yun is trying to revive. Through the performing arts, the company tours the world each year with four equally large groups, presenting the stories and traditions of the Divine Land.

Bright oranges and greens were married with an unexpected touch of elegance in the costumes of the Tang Dynasty, and a light purple matched with coral to lovely effect in dresses from a story during the Qing Dynasty.

It was beautiful for Ms. Crummer, and brought out even the concept of heaven in such a vivid way that it was relatable.

Mr. Ross said he thought the artistry of Shen Yun carried special meaning. The colorful costumes, the dance, and the landscapes shown on Shen Yun’s animated backdrop, brought the stories to life for him. He saw stories of humanity—stories of strife, perseverance, and ultimately happiness.

“It brings, following the stories, happiness,” he said. “You see the struggles that go on in the lifetimes that the folks had back then. You just see a tremendous amount of history, which is really interesting.”

“The deep history and the roots of the culture, I think really give a special meaning to it,” Mr. Ross said.