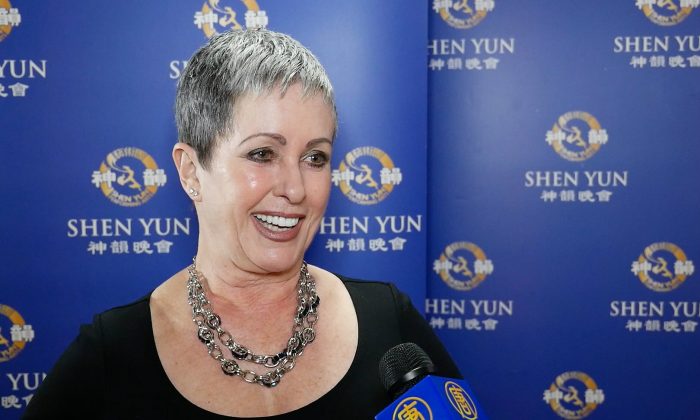 Ms. Yaroshuk, a graphic designer and artist with a background in dance, had caught a performance Jan. 15 and left filled with inspiration.

Based in New York, Shen Yun artists came from around the globe in 2006 to revive the divinely inspired culture through the universal languages of music and dance.

“It’s just visually exciting,” Ms. Yaroshuk said. Being a visual person, she felt the best way to describe her feeling of the show was a metaphor.

The colors had the biggest impact on Ms. Yaroshuk, who spoke of the pastels and brights, the peaks and valleys of color, and the emotions they evoked. Bright pinks and rich teals, pale greens on white and blue—every costume is a spectacle.

“The color is just gorgeous,” she said. “It’s almost like a piece of painting, like artwork … it just grows from a certain level, and then it gets to the crescendo, and then it’s a finished piece.”

Drawing on her dance training and experience with Tai Chi, Ms. Yaroshu was deeply impressed with the dance.

“A lot of people probably don’t understand just how physically demanding this type of dance is. It’s small movements but it’s hard to maintain that movement and have it look so fluid.”
— Debs Yaroshuk

“A lot of people probably don’t understand just how physically demanding this type of dance is. It’s small movements but it’s hard to maintain that movement and have it look so fluid,” Ms. Yaroshuk said.

Shen Yun performs classical Chinese dance, which is grounded in 5,000 years of divinely inspired culture, and aims to retain its pure form, according to the website.

It is a vast and independent system of dance with its own set of postures and movements. Classical Chinese dance is richly expressive, as well as technically challenging.

It involves many jumps, leaps, and tumbling techniques, according to Shen Yun’s website. It also emphasizes the inner spirit, which is what allows Shen Yun’s dancers to so accurately portray a wide array of characters.

Classical Chinese dance also serves as the foundation for the ethnic and folk dances Shen Yun choreographs for stage.

The combination of unique, colorful costumes, and unique dance inspired artist Eli Sudbrack in the audience as well.

Mr. Sudbrack runs an art company where he creates paintings, murals, film, mixed media, interactive online projects and more for a wide array of clients. He has worked with Art21, Comme des Garçons, MoMA, and displayed at several sites internationally.

Mr. Sudbrack is a creator of bright and bold things. For him, it was all about the movement.

“I loved the power,” he said. “And the costumes—especially whenever it was very acrobatic, they would be flowing—that was my favorite thing.”

He attended the Thursday evening performance with Mr. Nô Mello, a correspondent with Brazilian Vogue.

No stranger to fashion, Mr. Mello said he was impressed with the costumes. But what moved him most were the stories.

They were all new to him, Mr. Mello said, and he enjoyed seeing the history of China unfold on stage.

At the last minute, painter Avib Zuckerman decided he would buy a ticket to see Shen Yun.

“This is a phenomenal show, it’s an amazing show,” Mr. Zuckerman said. He had seen advertisements around, and decided he did not want to miss it this year, because the performances are new every season.

“This is a phenomenal show, it’s an amazing show.”
— Avib Zuckerman

It was a happy choice, he said, and his only regret is that he did not buy a ticket early enough to sit front and center.

“You get involved into every story, every character. Amazing,” Mr. Zuckerman said. “I would say that in every piece there is a little highlight.”

While watching the performance, he felt he was following every subject, every step. He was impressed with the perfection of the dancers, and how they were able to move as if they were one.

“Next year I will get closer. I want to be involved, I want to be closer to the whole thing,” Mr. Zuckerman said.