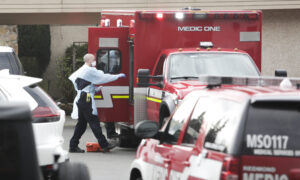 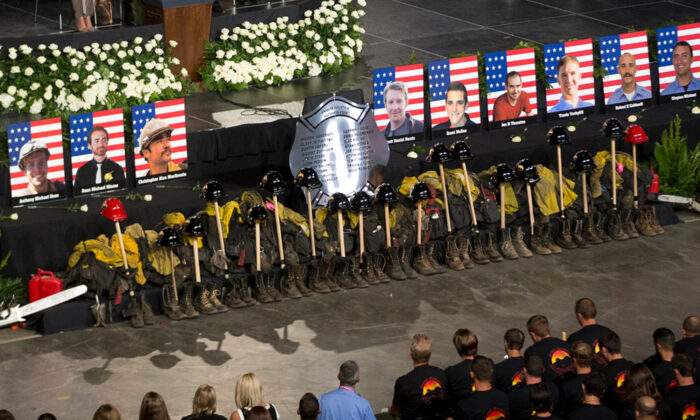 On Tuesday, Arizona Gov. Doug Ducey paid tribute to the 19 firefighters killed in the Yarnell Hill fire in June 2013; and flags all around the state of Arizona flew at half-staff to mark the seventh anniversary of the tragedy.

The massive wildfire had started some 30 miles southwest of Prescott, Arizona, in the hills near the tiny community of Yarnell, and the elite Granite Mountain Hotshots brigade were called in to face particularly difficult conditions.

Trapped by the sudden change in wind direction, the firefighters could only hunker down under an aluminum emergency fire shelter, which was unable to withstand the blaze. Of the 20 men originally sent into action, only one survived, who had been on lookout in another area.

“The fuels were very dry, the relative humidity was low, the wind was coming out of the south. It turned around on us because of monsoon action,” said Mike Reichling, Arizona State Forestry spokesman, to KNXV on Tuesday. “That’s what caused the deaths.”

Governor Ducey said it was one of the most tragic days in state history.

“The brave Yarnell 19 had their whole lives ahead of them,” Ducey said, reported AP. “They had families, loved ones and friends who cared deeply about them. They knew the dangers of their job, but they did it anyway, with courage and an abiding sense of duty and commitment to our communities.”

The loss of the 19 men represented the largest casualty count for any fire department since the September 11, 2001, terrorist attacks.

“We got a lot of hotshot crews in the nation, and they are the elite of the ground firefighters,” State Forestry incident commander Roy Hall said. “They’re highly trained and highly specialized. They are a younger generation. That’s the tragedy of it, that lives would be lost of such a young group.”

Today, those paying their respects to the fallen heroes can visit the Granite Mountain Hotshots Memorial State Park, located in the area where the fire raged in 2013, where 19 stone gabions are erected in a circle signifying each fallen man. Since opening in 2016, the park has become a popular place for visitors to honor the heroes.