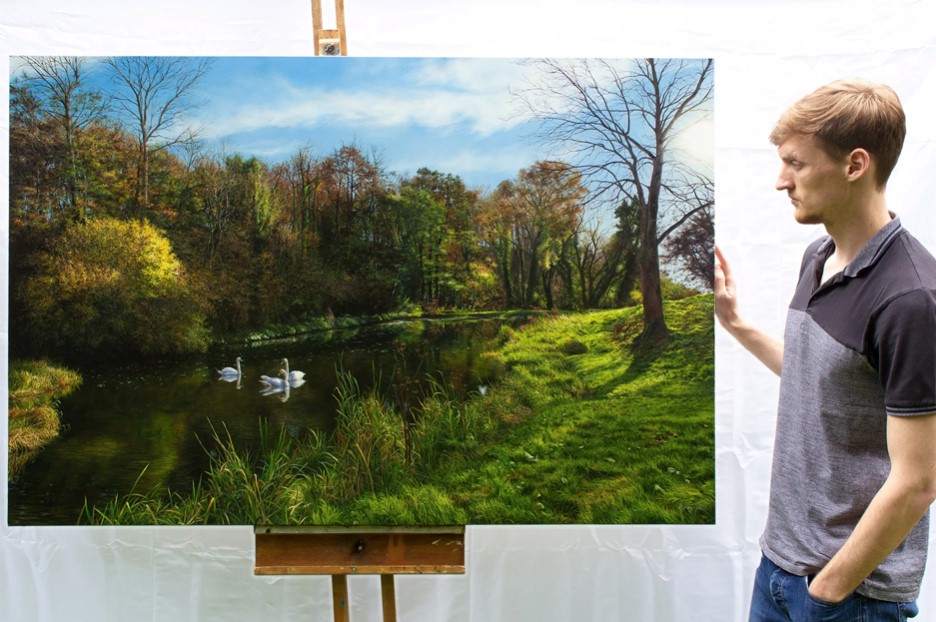 Are Realist Artists the Real Rebels?

Ash Davies is a young English artist unafraid to paint what he sees—be that people, wildlife, or landscapes—in a style that is aesthetic, recognizable, and precise. Dangerous words in today’s art circles.

“The themes that I do like to exaggerate in my work are color and chiaroscuro (light and dark). I love to increase the vibrancy of the colors as it adds life and energy to the scene I am painting,” Davies says on a video on his website.

His passion for art realism began with an encounter he had when he was just 15. He received an invitation to leading British wildlife artist David Shepherd’s retrospective exhibition and was able to talk to the man himself.

“When I met him and saw his works, I knew that this is what I wanted to do, and that I wouldn’t feel satisfied doing anything else,” Davies recalled.

Like his hero Shepherd, Davies uses a style has not been shaped or hindered by contemporary art trends and teaching styles.

Shepherd died in 2017 and although his works are still hugely popular with the British public and beyond, his realist approach attracted derision from the art establishment his entire life. One critic described his paintings as “kitsch and really naff.” Shepherd later confided to a friend: “They haven’t shown my works in their galleries when I’m alive, so they’re not going to have them when I’m dead.”

His works were often dismissed as photorealist by the abstract expressionist-favoring art institutions, which failed to acknowledge his ability to capture mood and climatic distortion such as heat haze as well as likeness. Davies understands the challenge between accuracy and maintaining the artist’s touch.

“My goal when I create art is not to copy an image perfectly, but more to provide an immersive experience for the viewer and to evoke a sense of atmosphere.“

“I also like my works to be uplifting to the viewers, and strong colors have that effect. I am a great fan of the Renaissance artist Caravaggio, and I love to have strong tonal contrasts in my paintings to add depth and space to the image. I like the epic realism of Caspar David Friedrich too.”

As a freshman art student, he faced a tough decision: either to accept the abstract bias of his university and its very high fees or quit. His mind was made up when his class was asked to paint blindfolded. Instead, he chose to return to his Cotswold home, in the heart of England, and hone his craft his way.

This new and uncertain chapter began with a commission to paint scenes for a documentary. That then led to an invitation from American-born Lady Ashcombe, the owner of stunningly beautiful Sudeley Castle, to be its artist-in-residence, and to a visit to his studio from the UK’s culture minister at that time, Lord Ashton.

Davies is concerned that while art schools continue to discriminate in favor of the abstract, students are being deprived of the opportunity to acquire valuable painterly skills. He established his Realist Art Academy so that anyone can study his courses on drawing, composition, and painting.

The techniques he explains as he draws or paints in his studio are designed to encourage his students to think like real artists, rather than give them easy tricks to impress their friends.

It is unusual to find an artist adept in so many genres, but Davies has no desire to specialize or to define himself just yet.

“I am still learning my trade, still passionate about what I do, and still excited to discover what is coming next.”

High on that list is to travel to Serengeti National Park to study the animals he loves in situ, just as his role model once did.

David Shepherd, who was awarded Commander of the Order of the British Empire, was not just a great artist. He was also a communicator and a wildlife conservationist who left a very big palette to try to pick up. Davies says of his mentor: “He motivated me, and I know he did that for thousands of others too. I will always be grateful to him for that.”

In his own way, Davies is also trying to inspire people.

“The world has been going through dark times recently and I want to remind people of the beauty that still surrounds us all.”

The painter Ash Davies is the son of the author, Andrew Davies.

To discover more about this young artist’s work, or to commission him for portrait, wildlife, or landscape paintings, even pets, his site is AshleyDaviesArt.co.uk