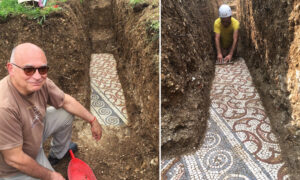 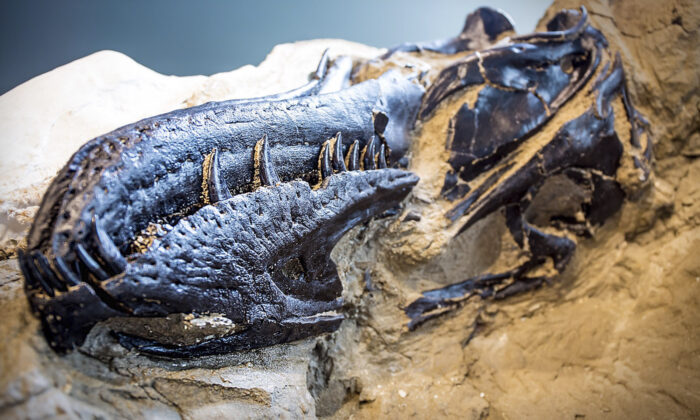 Paleontologists have uncovered the remains of a young tyrannosaurus rex and a triceratops buried in Hells Creek, Montana. The two dinosaurs appear to have been dramatically locked in battle at the time of their deaths.

The fossils were moved to the North Carolina Museum of Natural Sciences, and the museum announced on Nov. 17 that they plan to display the bones in the aptly named exhibit “Dueling Dinosaurs.”

In a press statement, the museum announced that the specimens will remain encased in sediment from the Montana hillside where they were discovered until paleontologists can safely remove the fossils from the sediment.

Lindsay Zanno, the museum’s lead paleontologist, told WRAL, “This is essentially a murder mystery in the making for the scientific team to uncover.”

She explained that the specimens, estimated to be about 67 million years old, were actually uncovered 10 years ago. But it wasn’t until five years ago that Zanno and the museum first saw the remains on auction at a warehouse in Long Island.

Remarkably, the bones had not been purchased. According to Zanno, this is the first time on record that paleontologists have recovered the remains of a T. rex completely intact. The triceratops remains are also well preserved, making this an extremely rare find.

“These specimens are pristine,” she said. “Every bone is in its natural position as it was when the animal died.”

“We have not yet studied this specimen,” she said. “It is a scientific frontier. The preservation is phenomenal, and we plan to use every technological innovation available to reveal new information on the biology of T. rex and Triceratops. This fossil will forever change our view of the world’s two favorite dinosaurs.”

The exhibit is also designed as an experience in which the public can see scientific discoveries happening in real time.

“[They can] participate in the research,” she added. “[It] will set a new standard for museums.”

According to Roy Campbell, director of exhibits and digital media at the museum, the exhibit aims to inspire future scientists.

“This is an unfolding story,” Campbell told WRAL. “When people lay eyes on these specimens in 2022, it’s just the beginning. The science begins here in this museum as we begin to uncover and decode the story locked inside these fossils. It will be ever-changing for many years to come.”

Campbell said it’ll be another two years before the exhibit opens, but the wait will be more than worthwhile.

“They are colossal, especially the Triceratops,” said Campbell. “There’s a lot of excitement in the museum. But the real payoff is when we see the general public coming in, because it’s their museum. When we get to share the treasures, that’s the most exciting part.”

“It’s like a Christmas present sitting in this unopened package,” Zanno told ABC. “And we get to open it with the public slowly, over time, and have those discoveries revealed.”