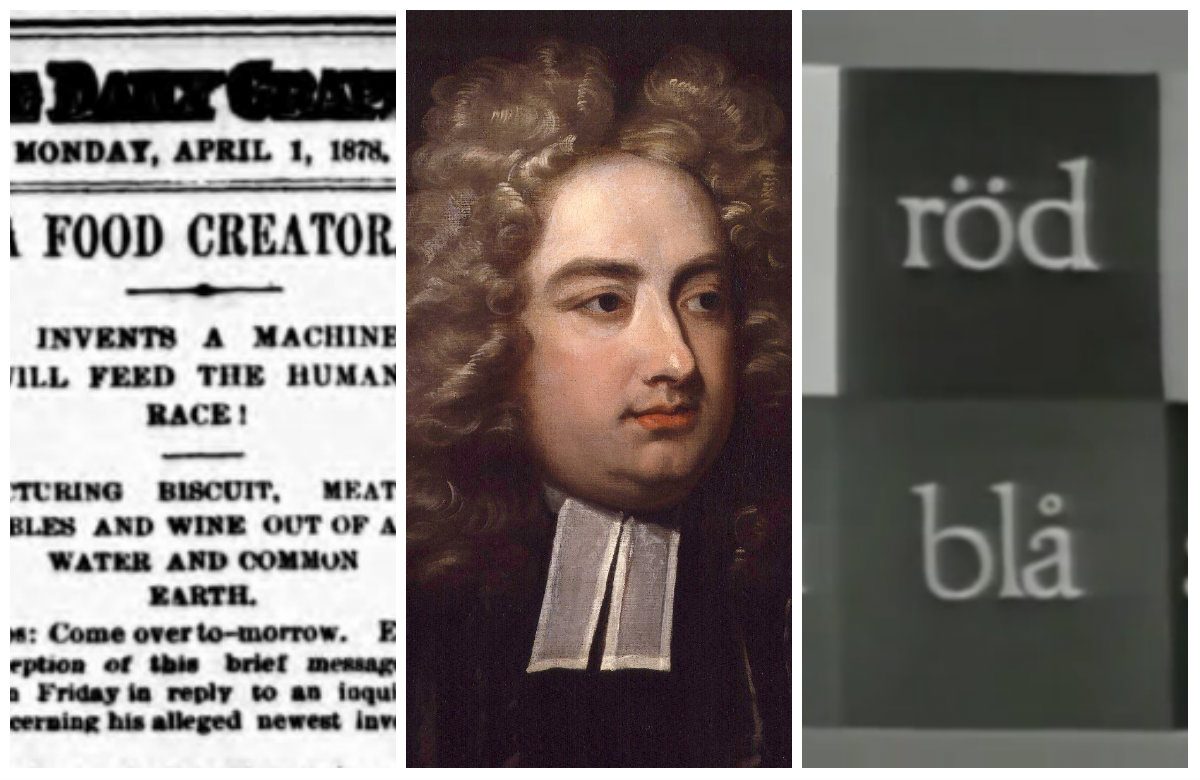 April Fools’ Pranks Before the Internet

The advent of the internet has made it incredibly easy to connect with individuals across the globe. With high-speed connections that allow one to have multiple transcontinental conversations in the time it takes to boil a kettle, communication has never been easier.

Quite like all modern interactions, performing April Fools’ pranks on April 1 has become a major feature of internet culture. But online pranks usually only require a modem, a couple of clicks of a mouse, and a few taps on a keyboard.

Pranking before the internet age was not as easy.

Pranking before the internet age was not as easy. Before the mid-1990s, in order to dupe the masses, pranksters required an element that seems to be slowly fading from the DNA of contemporary hoaxers—dedication to the joke.

In no particular order, here are five of the most convincing pranks of the pre-internet era, when elbow grease, not carpal tunnel syndrome, were required to turn someone into an April Fool.

Ranked as the second best hoax of all time by The Museum of Hoaxes, Sweden’s Sveriges Television (SVT) convinced many of its viewers that they could modify their monochromatic television sets to display images in color.

SVT was, at the time, the only television channel in Sweden. The lengths to which “Technical Expert,” Kjell Stensson and the rest of the SVT team extended themselves for this hoax is quite impressive.


With diagrams detailing quite elementary—though ill applied—optical principles, Stensson explains to viewers that they could harness the power of color diversion to give their sets “the impression of color.” By cutting nylons stockings and stretching the fabric over the television screen, every household in Sweden could instantly, simply, and cheaply enjoy color TV.

By cutting nylons stockings and stretching the fabric over the television screen, every household in Sweden could instantly, simply, and cheaply enjoy color TV.

To view the colors correctly, said Stensson, the viewing distance had to be exact. SVT even provided a “calibration card,” which could be utilized to determine to correct viewing distance.

“The result could be disastrous,” said Stensson of a improperly calibrated color dispersion apparatus, “for instance our female announcers, who are beautiful blondes, may appear red-haired, which may be somewhat disconcerting for them.”

Regular color broadcasts only came to Sweden in 1970.

London February 1708 saw the publishing of an almanac entitled “Predictions for the Year 1708” by one Isaac Bickerstaff. It predicted John Partridge, an astrologer renowned during the era, would die at exactly 11 p.m. on March 29, 1708.

An outraged Partridge immediately released a response, denouncing Bickerstaff as a fraud whose false claims would be revealed to all at the end of March.

“The Accomplishment of the First of Mr. Bickerstaff” was anonymously published around March 30, noting that Partridge had indeed died on March 29th, though at 7:05 pm rather than 11 pm as predicted by Bickerstaff.

On April 1, Partridge awoke to a sexton outside his window, inquiring if there were any plans for his funeral. Although Partridge published a pamphlet insisting that he was still alive and that Bickerstaff was a liar, the elaborate prank was so convincing that Partridge could no longer publish the almanacs for which he was famed.

Swift is arguably the best satirist to have ever written in the English language.

The discredited astrologer dealt with the effects of his supposed death until his actual death, which was no earlier than 1714.  It was later revealed that “Isaac Bickerstaff” was a pseudonym of Jonathan Swift, the author of “Gulliver’s Travels.” Swift is arguably the best satirist to have ever written in the English language.

Representative James Albertus Tawney was perhaps one of the first victims of the now classic prank telephone call. In 1910, when Tawney was a Republican congressman for Minnesota’s first district and the chairman of the Committee on Appropriations, a note arrived at his office informing him to “Call up Mr. Train” at number “Main 7380.” When he did so, the story goes, Tawney asked for Mr. Train as instructed.

“Did you?” asked the voice at the other end.

Tawney is said to have slammed the phone down when he realized that it was indeed April 1.

Americans in the late 1800s believed that there was no limit to Thomas Edison’s genius. To the extent that in 1878, when the “New York Daily Graphic” printed that Edison had invented a machine that could transform water into wine and soil into cereal, journalists across America picked up the story.

Buffalo, New York’s “Commercial Advertiser” especially praised the notorious inventor, telling its readers to “be thankful that the genius of true benefactors of the race, like Edison, cannot now be crippled and blighted by superstition and bigotry, as it was when Galileo was forced to recant the awful heresy that two and two make four.”

The “New York Daily Graphic gloatingly reprinted the article with the headline “They Bite!”

The British Broadcasting Corporation’s (BBC) news program “Panorama” fooled viewers throughout the United Kingdom on April 1, 1957. The program aired a segment depicting Swiss spaghetti farmers harvesting their unusually large spaghetti crop from trees, due to the “mild winter” and the disappearance of a pest known as the “spaghetti weevil.”

The hoax was so convincing, that hundreds of callers flooded BBC’s telephone lines, requesting information on how they could grow spaghetti themselves. It is ranked by The Museum of Hoaxes as the best April Fools’ prank of all-time.