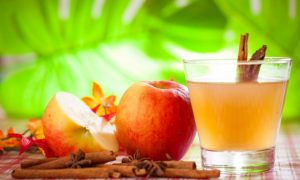 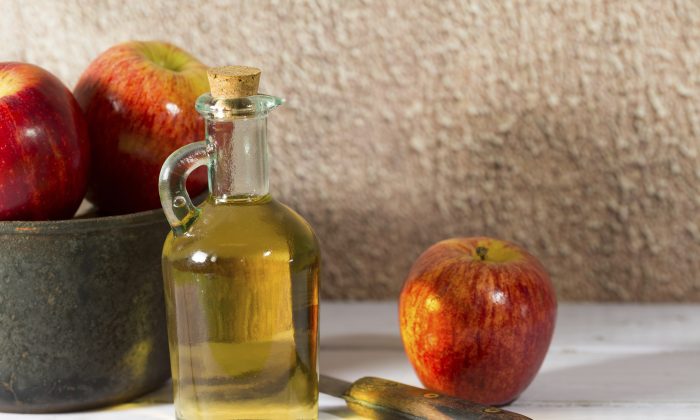 Historical evidence credits ancient Babylonians (5,000 B.C.) for creating vinegar or “sour wine” stemming from the French origin “vin airgre.” The benefits were not overlooked by the father of medicine, Hippocrates, who historically used apple cider vinegar, or cider vinegar, to treat wounds as well as to prescribe it as a tonic solution for a persistent cough.  Studies have shown that apple cider vinegar has a profound ability to improve blood sugar regulation and speed up weight loss.

The fermentation process is required in two series to produce cider vinegar. First, bacteria and yeast break down the sugars into alcohol. Secondly, over a slow and lengthy process, acetobacterium cause the oxidation of alcohol into acetic acid.

Acetic acid distinguishes cider vinegar by giving it a pungent, sour taste and may leave a cloudy, substance, called the mother, in the bottom of the glass.  The mother is the fermenting portion of the apple and it is rich in enzymes.  It is best to buy raw, unpasteurized apple cider vinegar with the mother intact.

A common way of fulfilling a dietary dose of cider vinegar is to utilize it in salad dressing or take a small shot glass of the tonic before a high caloric meal, especially before consuming protein such as beef that requires a longer period for digestion.

Researchers believe that cider vinegar has antiglycemic properties and plays a pivotal role in regulating sugar levels in type 2 diabetics. Specifically, it is possible that a key component of the vinegar acts as an antiglycemic agent by mocking the chemical pathway of the drug, metformin, used by diabetic patients.

Side effects of metformin use include drowsiness, nausea, and diarrhea among other problems.

Metformin use is also linked to liver disease and heart failure.

The Research on Cider Vinegar and Glycemic Control

A Japanese study in 2003 found that the glycemic index (GI) was reduced by over 30 percent when the simple swap of a pickled cucumber was made for a fresh cucumber.  Post prandial glycemia is a spike in an individual’s blood glucose levels following meals.

The simple introduction of vinegar consumption with a meal improved blood glucose sensitivity in several studies. The Diabetes Journal published a study in 2007 assessing the effects of vinegar on waking hyperglycemia in type 2 diabetic individuals, a condition known as “dawn phenomenon.”

Noted was a 4–6 percent reduction in fasting glucose levels when individuals received only 2 tablespoons of apple cider prior to a meal, in comparison to a lower 3–6 percent fasting glucose reduction when the same individuals received pharmaceutical treatment. Another study showed that women had a 55 percent reduction in blood glucose response following a morning meal containing vinegar.

There are various factors promoting weight loss in individuals consuming a daily intake of cider vinegar (approximately one or two tablespoons). The antiglycemic effect may be attributed to the suppression of carbohydrate synthesis by inhibiting enzymes that stimulate the rate and timeframe of blood glucose concentration and consequently regulating satiety and/or appetite.

Weight loss effects from cider vinegar are evident in a group of 155 obese Japanese individuals. Data collected signified a decrease in visceral fat, BMI, and serum triglyceride levels among other health benefits. With many factors promoting the detoxification and overall health of the liver, weight loss may also be caused from the stimulation of fecal bile acid excretion when consuming apple cider vinegar.

Have one tablespoon in a 4-ounce glass of water before each meal. This will help stabilize post-meal blood sugar levels and reduce inflammatory agents.

Add it to your salads and meats, the acetic acid and enzymes in apple cider vinegar will help to premetabolize the meal and make the nutrients more bioavailable for your digestive system.

David Jockers writes for Organic Lifestyle Magazine where this article was originally published.