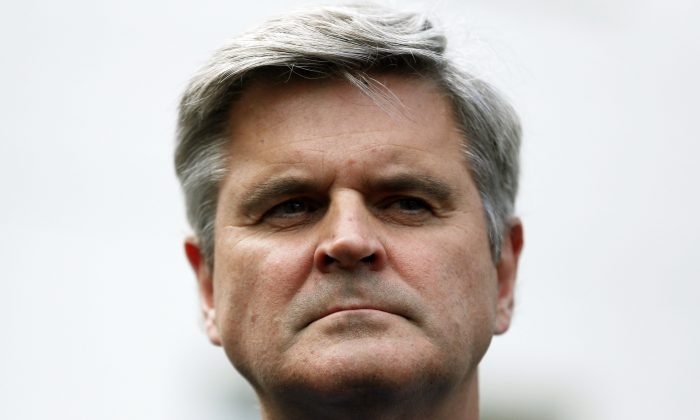 President and CEO, Revolution LLC, and AOL co-founder, Steve Case appears outside of the White House after meeting with President Barack Obama about immigration reform in Washington, D.C., on June 11, 2013. Simon & Schuster announced Wednesday, Nov. 4, 2015, that Case's latest book, “Third Wave,” will come out in April. The publisher is calling the book "part memoir, part manifesto and part playbook of the future." He will look back on his years with AOL and the disastrous merger with Time Warner, but will focus on what he believes is a new era, a “third wave,” for the Internet. (AP Photo/Charles Dharapak)
Arts & Culture

Simon & Schuster told The Associated Press on Wednesday that Case’s “Third Wave” will come out in April. The publisher is calling the book “part memoir, part manifesto and part playbook of the future.” Case will look back on his years with AOL and the disastrous 2001 merger with Time Warner, but will focus on what he believes is a new wave in the digital era, a “third wave,” a theory he has been talking about over the past year. The book’s title is an homage to futurist Alvin Toffler’s “The Third Wave,” the 1980 best-seller that described the world as entering a post-industrial “Information” age.

According to Case, the first wave began in the mid-1980s, when AOL and other companies “laid the foundation for consumers to connect to the Internet.” The second wave started around 2000 and was defined by the rise of the search engine, social networking and the smartphone. In the third wave, the Internet will transform everyday life, whether civic activism, government regulation to consumer choices.

“I thought there was a need for a framework of where we are,” Case told the AP during a recent interview.

Case, 57, is now chairman and CEO of Revolution, a Washington, D.C.-based investment firm that he launched in 2005. He says that for years he’s been asked by publishers to write a book, but that the request was for a more straightforward memoir.

“I was more interested in the future than in the past,” he said. “But last year I realized the future will look a little like the past.”

Financial terms for the book were not disclosed. Case was represented by Washington attorney Robert Barnett, whose clients have ranged from President Barack Obama to such business leaders as former General Electric CEO Jack Welch and Nike co-founder Phil Knight.