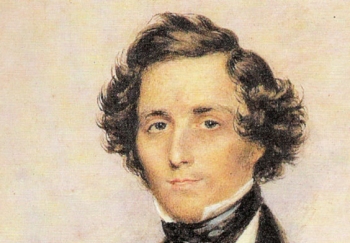 FELIX MENDELSSOHN BARTHOLDY: The composer at the age of 30 pictured in London in a watercolor painting by James Warren Childe (detail), 1839. ()
Arts & Culture

We are approaching the last month to celebrate the 200th anniversary of the birth of Felix Mendelssohn Bartholdy.

Throughout the year, especially in Leipzig, the center of his life and musical work, Mendelssohn has been celebrated with concerts. Musicians like the world-renowned violinist Anne Sophie Mutter contributed to the celebration; Mutter, on this occasion, re-recorded Mendelssohn’s violin concertos.

Living a charmed life, as his name predicted (Felix means “the happy one” or “the fortunate one” in Latin), Felix Mendelssohn Bartholdy (1809-1847), was one of the most extraordinary composers of the 19th century. His relatively short life—he died at 38—had many similarities to Mozart´s, not the least of which, due to his industriousness, was his great influence.

Mendelssohn’s musical education followed the strict rules of the Classical period while his talent and personality unfolded in the early Romantic era. Thus, his work is unmatched in drawing on the qualities of both.

Unlike his contemporaries Schubert and Schumann, whose works display the dark and melancholic mood commonly associated with the Romantics, Mendelssohn´s music breathed joy, serenity and elegance. At the same time it was emotional and inclined to narrative.

His oratorios, majestic and splendid monuments of faith, became fundamental works of the 19th century musica sacra and prove that he also was capable of great depth and profound musical language.

Although Felix’s father, Abraham Mendelssohn, was the son of the Jewish philosopher Moses Mendelssohn who reformed the Judaism of the 18th century, Abraham baptized and raised his children as Protestants. An avid enthusiast for the arts himself, Abraham soon recognized the great talent of his children.

The children had more than a musical bond; the emotional tie between the siblings, Fanny and Felix, was strong and lasted throughout their lives.

As the family was well-situated, Fanny and Felix were educated by the best teachers, intellectuals, and musicians. Among them was Carl Friedrich Zelter, who earned a great reputation as a music professor and composer.

Mendelssohn, then, had the best conditions to grow up as a prodigy. In 1818, at the age of 9, he appeared for the first time in public. The next year he joined the choir Berliner Sing Akademie which Carl Friedrich Zelter directed. Here Mendelssohn started to study the music of the masters.

At the age of 11, he started composing, completing 60 pieces his first year, including songs, piano sonatas, piano trios, and a sonata for violin and piano.

During the Biedermeier era, it was common to host music soirees every Sunday afternoon at home. Felix used this opportunity to conduct an amateur orchestra that, from 1822 on, was supported by the professional musicians of the Berlin Court Chapel. He composed the music for these occasions and practiced them at home.

At 17 he wrote his masterpiece, “Overture to ‘A Midsummer Night’s Dream’ “ which was later completed for Shakespeare’s play with other pieces, including a Scherzo, Nocturno, and Wedding March.

Mendelssohn had an amazing ability to memorize music. Once, when he accidentally left a score in a carriage, he was able to simply rewrite the lost music from memory.

At 20, he accomplished an historic coup in the world of music: He uncovered forgotten parts of Johann Sebastian Bach’s “St. Matthew Passion“ in Leipzig and determined to perform it as a whole. This oratorio had only been performed in parts at the time. Against the wishes of his teacher Zelter, he brought late honor to Bach´s masterpiece which, in fact, led to a renewed appreciation of Bach at the time.

Later in life, Felix Mendelssohn stayed in contact with some of the most influential personalities of his time—the German genius Goethe was one of his many friends.

It was common during Mendelssohn’s day for a composer to conduct his own compositions. There was no practice of conducting others’ works. The term conductor didn´t even exist.

The music of the Romantic period was more demanding to interpret than that of the Classical period. The growing complexity of the scores, the nuances in dynamics, and the surprising changes in rhythm called for a new artist to control them.

Mendelssohn established the profession of the conductor as we know it today.
He had conducted for years at his family´s soirees. He was also the first to hold a baton while conducting.

In 1836 Mendelssohn was awarded the Doctor Honoris Causa by the University of Leipzig. He composed his oratorio “St. Paul“ and was assigned as Director of the Gewandhaus of Leipzig, one of the most excellent musical institutions of his time. There Beethoven symphonies were performed directly after they premiered in Vienna.

At about this same time, Mendelssohn married a clergyman’s daughter, and this proved to be a happy marriage. He celebrated many successes in Leipzig. He founded the Leipzig Conservatory in 1843 and hired his friend Robert Schumann as piano instructor. In 1845 his violin concerto had it´s world premiere.

When Mendelssohn died in 1847, (a few months after his beloved sister Fanny had passed away following a stroke), the whole of Europe went through a period of mourning, so beloved was he among the people.

After Mendelssohn’s death, attempts were made to repress the fame and influence of his genius, all rooted in irrational anti-Semitism that arose in 19th century Europe and preceded the Third Reich.

Unfortunately, another German genius was responsible for casting shadows on Mendelssohn´s reputation. Richard Wagner, a Romantic composer himself and undoubtedly a benefactor of Mendelssohn’s achievements, wrote and published a pamphlet “Judaism in Music,“ in which he wrote disparagingly about the “Jew“ Mendelssohn. The first publication in 1850 (only three years after Mendelssohn passed away) is believed to have been driven by Wagner’s envy and frustration over his own struggle to be acknowledged. However, even after becoming famous, Wagner again launched his attacks in 1869, further undermining the appreciation of Mendelssohn’s music at the end of the 19th century.

The Nazis eventually banned the performance of Mendelssohn’s music completely and tore down many monuments to Mendelssohn in Germany, even one in front of the old Gewandhaus in Leipzig.

They tried unsuccessfully to erase all references to the friendship of Mendelssohn and Goethe from the poet’s biography. They also asked German composers to write alternative works for "A Midsummer Night’s Dream."

In 2008 Leipzig reconstructed a monument to Mendelssohn that stands almost 25 feet tall before the Thomas Church. Fortunately, the "happy one" has prevailed.