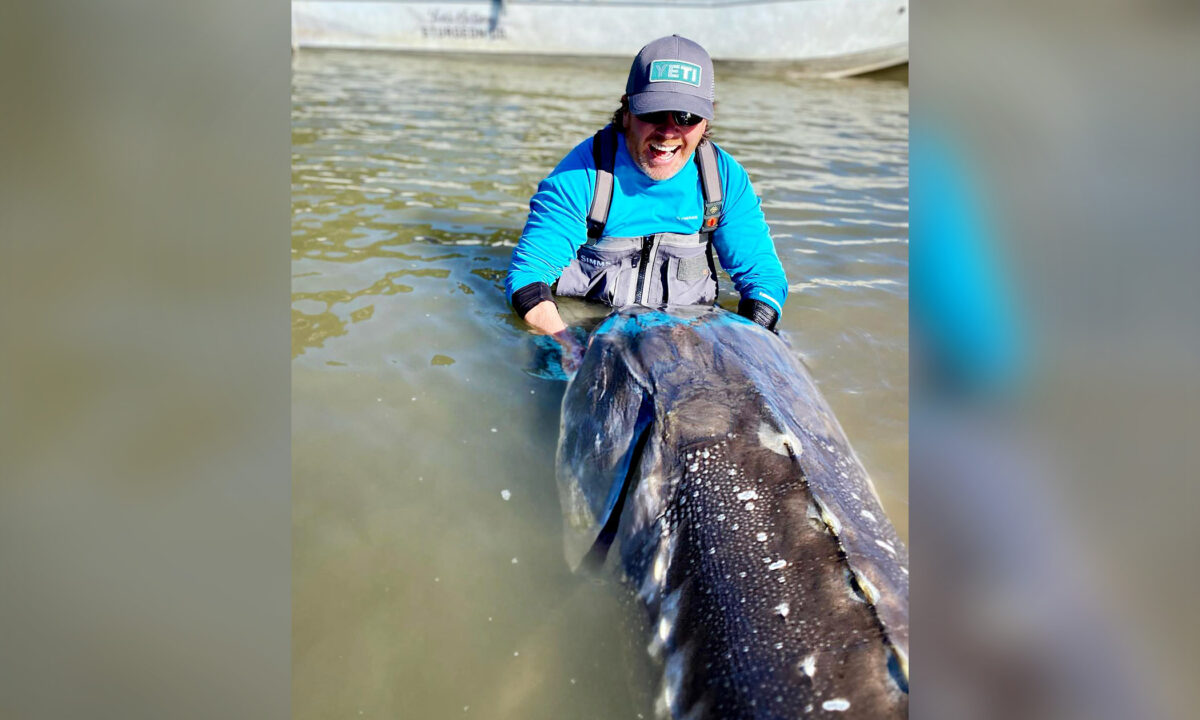 If size counts for anything, it proves the fishing tour business on the Fraser River in B.C. is back on track after a two-year upset.

Just ask fishing guide Yves Bison, 47, who last spring caught the second largest sturgeon he’s ever seen. The tour guide of 20 years boasts a 100 percent catch rate on his outings, and has reeled in over 20,000 sturgeons with his clients over the years.

On this particular day in March, the waters were cold, so there weren’t that many other guides out on the Fraser River. Yves and his guests hit the waves and soon felt an elemental tug on the line.

“After we hooked it, we saw it jump immediately, so we knew we had something pretty special on the end of the line,” Yves told The Epoch Times.

What they witnessed amounted to 600 pounds of cold, scaly, wreathing sturgeon launching itself into the air.

Yves’s guests were in awe. “They were stunned, shocked, surprised, excited,” said the guide.

It took them about 30 minutes of battling to reel in the fish, which they almost lost when it wrapped itself under the boat and nearly broke the rod.

They eventually tired out the sturgeon and brought it into shallower waters, where Yves could jump in and take a closer look as it recovered from the exhausting fight.

“It was something to behold,” he told the newspaper. “Everyone was kind of blown away just by the fact that it had probably never been caught.”

They measured the sturgeon to be 10 feet, 7 inches in length, but it was unusually fat for a sturgeon.

“That one was probably the widest [I’ve ever seen] as far as girth goes,” said Yves. “This is my 20th year guiding and I’ve seen almost 23,000 sturgeon that I’ve been able to handle in my fishing career, so it’s something to behold when you see something that big,”

They recorded some video with the behemoth fish and tagged it before sending it on its merry way.

“The fact that it was not tagged and we were able to put a tag in it for our mark-and-recapture program to track and monitor fish populations was something even more special,” said Yves.

He shared footage of the massive fish on social media, and it went viral. Some of the viewers who comment on Yves’s catches wonder whether the sturgeon are hurt or killed in his expeditions.

He insists they are not and data indicates only a 0.012 mortality rate for sturgeon caught by rod.

“We have all the data,” he said. “They continue to grow; they continue to spawn; they’re healthy. There’s tons of fish in our river. It’s a 100 percent catch and release.”

He added, “I tell people, if we were harming them in any way and there was a pattern that would show up in our data, I would probably be the first to quit.”

While Yves runs charters, he also volunteers his time to educate people about sturgeon, tag fish, and collect data to give the provincial government.

So, fishing along the Fraser River appears to be back to business as usual. Meanwhile, the monster sturgeon it’s famous for are likely to only continue to get bigger.