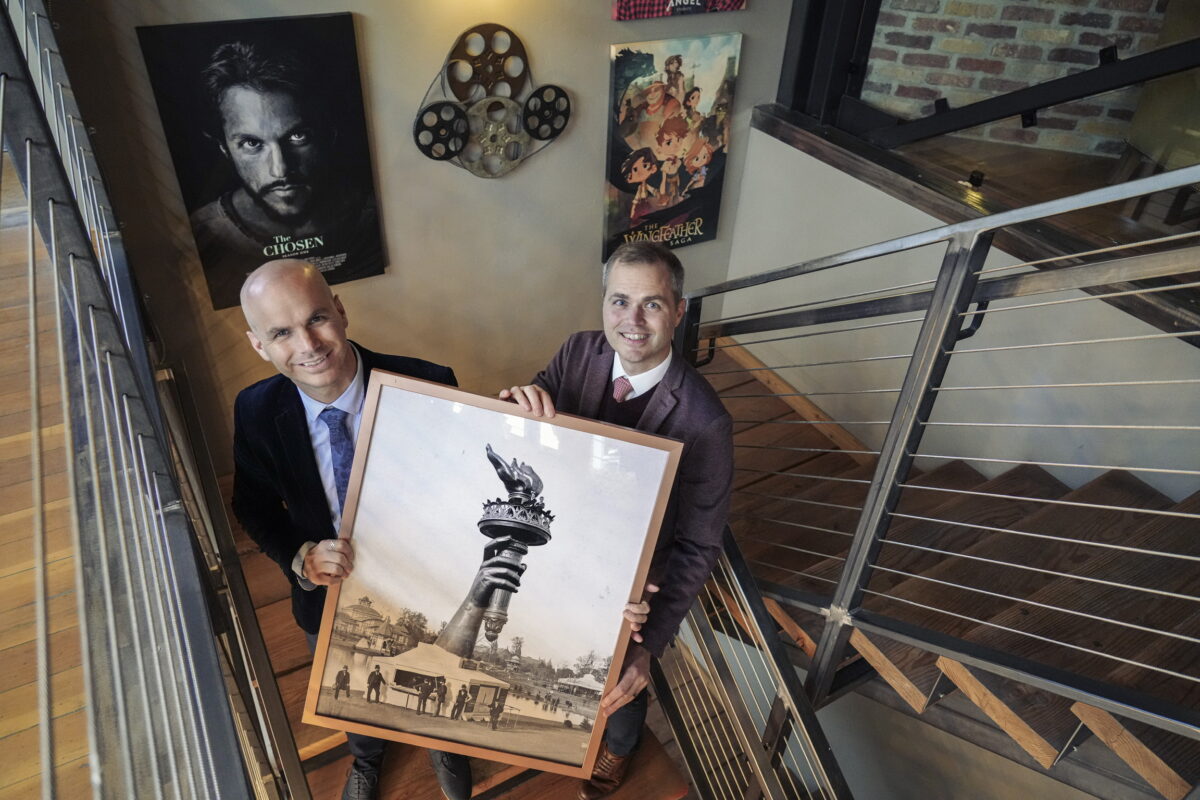 Jeffrey (L) and Neal Harmon hold a photo of the Statue of Liberty's arm and torch as displayed at the 1876 Centennial Exhibition in Philadelphia. The brothers are inspired by the story of how newspaper publisher Joseph Pulitzer successfully held a fundraising campaign to bring the statue to New York City. (George Frey for American Essence)
Arts & Culture

Angel Studios: A TV and Film Company with an Ambition to Spread Positivity

Jeffrey Harmon may be the most unlikely person to become a key player in the television industry. “We grew up on a potato farm in Idaho,” he told American Essence. “We had a tube TV that got three channels. We could get PBS with an antenna.”

Harmon didn’t watch a lot of TV growing up. Instead, he and his brothers spent their teenage years selling potatoes door-to-door in Utah before moving on to the landscaping business. But when he studied marketing and advertising at Brigham Young University from 2006 to 2008, his thinking began to shift.

”I roomed with a few film majors,” he said. “Spending time with them opened up my thinking in a lot of ways.” Harmon said he pioneered the YouTube ad agency Orabrush, Inc., which generated 20 million views for its clients in 2009, well before YouTube’s popularity exploded.

From there, Jeffrey and his brother Neal Harmon co-founded VidAngel, a service that gave parents the ability to filter explicit content on streaming video services like YouTube.

“It’s like a remote that skips sexual scenes, rape, and swearing,” Jeffrey said. Around that time, he and Neal began thinking that they could help make programming that didn’t require censorship. While that may mean less business for VidAngel, it also meant the potential for a new, untapped market for “stories that amplify light.”

“We were inspired by Pixar,” Jeffrey said. “We began to seriously think that if they could do it, so could we.”

Now, Jeffrey Harmon is the chief content officer at Angel Studios, which he co-founded with Neal in January 2021. Angel Studios uses a crowdfunding model to raise money to produce shows like “The Chosen,” the first multi-season show about the life of Christ and the Gospels. In “Freelancers,” a family-friendly sitcom, five friends try to make it as filmmakers, “one terrible job at a time,” according to the show’s fundraising site. “The Riot and the Dance,” which features rapper Kanye West’s track about his Christian faith, “Selah,” is the first faith-based nature docuseries that explores the idea that humans are “part of God’s plan, and not a poison to be ashamed of for living on this earth,” according to an Angel Studios press release. The company then distributes this content via video-on-demand services.

The studio also released a children’s show called “Tuttle Twins,” based on the best-selling series of books by Connor Boyack. The show follows lovable characters as they journey through time to teach kids about the country’s foundational principles of freedom, free-market capitalism, personal freedom, and more. Showrunner Daniel Harmon—another of the six Harmon brothers, not to be confused with the co-creator of the animated sitcom “Rick and Morty”—said “Tuttle Twins” was made possible by “we the people.”

“Thousands of supporters … have gotten behind us and invested their hard-earned dollars in this series,” said Daniel, Angel Studios’ chief creative officer, in a press release.

Jeffrey still marvels at how it all happened. “We are the most unlikely people to be working in this space.”

The journey toward creating a new model for a film studio wasn’t easy. In fact, VidAngel was embroiled in a four-year legal battle with Pixar’s parent company, Disney; Warner Bros.; and 20th Century Fox, among others. A federal bankruptcy court judge ruled that VidAngel’s service constituted altering content from the aforementioned companies. From there, Neal Harmon said, a $62.4 million settlement was whittled down to a $9.9 million payout.

“Most small companies don’t survive a lawsuit with Disney,” Neal said. VidAngel had only $2.2 million in the bank then, which would have sent the company into liquidation. Standing on the edge of an uncertain future, the Harmons asked their fans to help bring the company back from the brink of bankruptcy.

“We didn’t have the money to fight this fight,” Neal said. “But, I said, we’ll fight if you want us to.” Over the following five days, 8,000 people donated $10 million to help keep VidAngel alive. Half of that went toward the company’s legal battle. The other half funded “Dry Bar Comedy,” an online stand-up series that features hundreds of family-friendly stand-up comedy specials.

Some investors were wary of the studio entering a saturated market like stand-up comedy, but Jeffrey said he stuck to his guns. “One comedian told us that he’d been waiting for a project like this to come out of LA or New York,” Jeffrey said. “He didn’t expect it to come out of Provo, Utah.”

The Harmons quickly realized that they could use the same crowdfunding model to fund individual projects. They raised over $10 million for “The Chosen” and $1.5 million for the aforementioned faith-based nature documentary. The $4.6 million they raised for “Tuttle Twins” made it the most successful crowdfunded kids show in world history, according to the studio’s website—not bad for a content distributor that, at the time, hadn’t yet hit the one-year mark.

It’s What the People Want

Neal and Jeffrey could not affirm that Kanye West personally approved “Selah,” from his ninth studio album, “Jesus is King,” to be used to promote the nature documentary. But they feel that he had to believe in the project somehow to have approved the music licensing. “That’s at least some sign of accomplishment,” said Neal.

“One of our advantages,” Neal said, “is that the projects we make are determined by our audience, via crowdfunding. It’s a rigorous process. Very few projects make the cut, as they go through rounds of viewing and voting.” Still, the Harmons bristled at the idea that their process could be called “democratic.”

Instead, Jeffrey said that he thinks often of newspaper publisher Joseph Pulitzer’s efforts to crowdfund a pedestal for the Statue of Liberty. “That was America’s first major crowdfunding project,” he said. Pulitzer was feeling the pinch as the statue made its way from France to the United States, so he launched a fundraising campaign that was advertised through his newspaper, “The New York World.”

“Pulitzer promised to put the names of donors on the front page of his paper,” Jeffrey said. “In some sense, that’s what we’re doing.”

The company is named after the “angels” who fund their projects, Neal said. “And we’re just getting started. Our goal in the next five years is to see ‘The Chosen’ reach a billion viewers.”

“Once we build this thing,” he continued, “we’ll help to distribute even more crowdfunded content. It’s what the people want.”