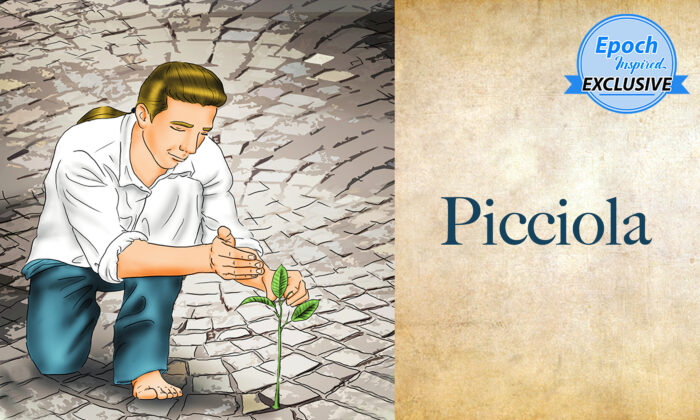 “Picciola” is about a man who was wrongfully put in prison and felt that no one in the world cared about him, until a seedling sprouting in the prison grounds caught his attention and changed everything.

Many years ago, there was a poor gentleman shut up in one of the great prisons of France. His name was Charney, and he was very sad and unhappy. He had been put into prison wrongfully and it seemed to him as though there was no one in the world who cared for him.

He could not read, for there were no books in the prison. He was not allowed to have pens or paper, so he could not write. The time dragged slowly by. There was nothing that he could do to make the days seem shorter. His only pastime was walking back and forth in the paved prison yard. There was no work to be done, no one to talk to.

One fine morning in spring, Charney was taking his walk in the yard. He was counting the paving stones, as he had done a thousand times before. All at once he stopped. What had made that little mound of earth between two of the stones? He stooped down to see. A seed of some kind had fallen between the stones. It had sprouted, and now a tiny green leaf was pushing its way up out of the ground. Charney was about to crush it with his foot, when he saw that there was a kind of film coating over the leaf. “Ah!” said he. “This coating is to keep it safe. I must not harm it.” And he went on with his walk.

The next day, he almost stepped upon the plant before he thought of it. He stooped to take a look at it. There were two leaves now, and the plant was much stronger and greener than it was the day before. He stayed by it a long time, looking at all its parts.

One day as he was looking from his window, he saw the jailer go across the yard. The man brushed so close to the little plant that it seemed as though he would crush it. Charney trembled from head to foot. “Oh my Picciola!” he cried.

When the jailer came to bring his food, he begged to the grim fellow to spare his little plant. He expected that the man would laugh at him, but although a jailer, he had a kind heart.

“Do you think that I would hurt your little plant?” said the jailer. “No indeed! It would have been dead long ago, if I had not seen that you thought so much of it.”

“That is very good of you, indeed,” said Charney. He felt half ashamed at having thought the jailer unkind.

Every day, he watched Picciola, as he had named the plant. Every day, it grew larger and more beautiful. But once, it was almost broken by the huge paws of the jailer’s dog. Charney’s heart sank within him. “Picciola must have a house,” he said. “I will see if I can make one.”

So, though the nights were chilly, he took, day by day, some part of the firewood that was allowed him, and with this he built a little house around the plant. The plant had a thousand pretty ways, which he noticed. He saw how it always bent a little toward the sun; he saw how the flowers folded their petals before a storm. He had never thought of such things before, yet he had often seen whole gardens of flowers in bloom.

One day, with soot and water he made some ink; he spread out his handkerchief for paper; he used a sharpened stick for a pen. And all for what? He felt that he must write down the doings of his little pet. He spent all his time with the plant. “See my lord and my lady!” the jailer would say when he saw them.

As the summer passed by, Picciola grew more lovely every day. There were no fewer than thirty blossoms on its stem. But one sad morning, it began to droop. Charney did not know what to do. He gave it water, but still it drooped. The leaves were withering. The stones of the prison yard would not let the plant live.

Charney knew that there was but one way to save his treasure. Alas! How could he hope that it might be done? The stones must be taken up at once. But this was a thing which the jailer did not dare to do. The rules of the prison were strict: no stone must be moved. Only the highest officers in the land could have such a thing done.

Poor Charney could not sleep. Picciola must die. Already the flowers had withered; the leaves would soon fall from the stem. Then a new thought came to Charney. He would ask the great Napoleon, the emperor himself, to save his plant.

It was a hard thing for Charney to do: to ask a favor of the man whom he hated, the man who had shut him up in this very prison. But for the sake of Picciola he would do it.

He wrote his little story on his handkerchief. Then, he gave it into the care of a young girl who promised to carry it to Napoleon. Ah, if the poor plant would only live for a few days longer.

What a long journey it was for the young girl. What a long and dreary waiting it was for Charney and Picciola. But at last, good news came to the prison. The stones were to be taken up. Picciola was saved! The emperor’s kind wife had heard the story of Charney’s care for the plant. She saw the handkerchief on which he had written of its pretty ways. “Surely,” she said, “it can do us no good to keep such a man in prison.”

And so, at last, Charney was set free. Of course, he was no longer sad and unloving. He saw how God had cared for him and his little plant, and how kind and true are the hearts of even rough men. And he cherished Picciola as a dear, loved friend whom he could never forget.