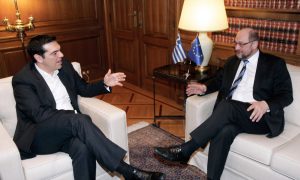 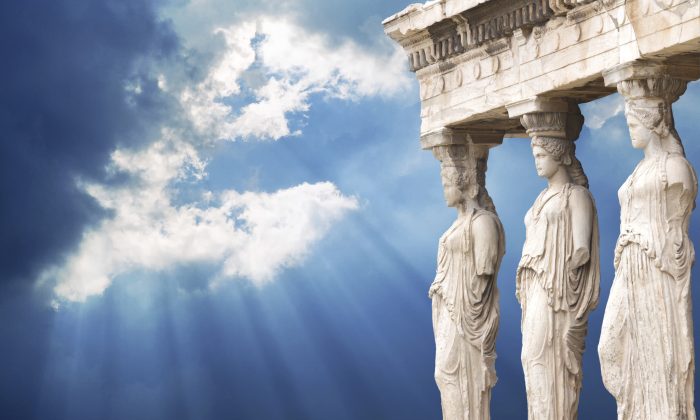 What is Greece all about? Bearded philosophers? Caryatids? Spartans? (TMSK/iStock)
Arts & Culture

The financial crisis facing modern Greece is grabbing daily headlines. At the same time, ancient Greece is also captivating our attention. Juliette Binoche is Antigone; Helen McCrory has been Medea.

The Almeida Theatre in London started its ancient Greece season with an event titled “Why Greeks Matter.” The Greeks are the stars of the current British Museum exhibition Defining Beauty. To top it all, the team behind the phenomenally successful “Hunger Games” franchise has announced the fast tracking of an epic film version of Homer’s “Odyssey.” What’s got stars, theater, TV, filmmakers, and the public so excited about ancient Greek drama and epic all of a sudden?

I’m an academic specializing in ancient Greece and Rome, so I’m fully supportive of this renewed interest in the extraordinary outpourings of this ancient Mediterranean culture. But I am, at the same time, intrigued by why ancient Greece is now on everyone’s lips. One simple answer might be that it is thanks to the financial dilemmas facing modern Greece, meaning that the country is all too obviously in the full glare of world interest. But I think our current turn toward ancient Greece touches on an even more fundamental nerve in modern society.

My experience in writing and presenting TV documentaries about the ancient world is that it’s much harder to get a program about ancient Greece commissioned than ancient Rome or indeed ancient Egypt. People are more likely to “get” ancient Rome, feel it as a real and connected part of history (particularly in the U.K. due to the Roman invasion). Egypt, on the other hand, is seen as completely different, alien, and consequently equally intriguing. It’s easy to pigeonhole these cultures.

But Greece? What is Greece all about? Bearded philosophers sitting around discussing ideas? A world of broken columns and oiled athletes? A ongoing cycle of civil war interspersed with moments of death-loving Spartan heroics?

It was all of these things. In fact, in many ways it’s impossible to get a handle on ancient Greece because Greece was such a kaleidoscopic world: its politics, cultures, fighting styles, artistic traditions, and dialects to a large extent fragmented among more than 1,000 city-states, numerous tribal groupings, and monarchies spread over a landscape punctured by mountains and broken up into endless island chunks by the Aegean Sea.

That variety of culture means we simply can’t pigeonhole the Greeks in the same way as the Romans or Egyptians; we can’t get a clear steer on what made them tick and how they connect to us. That’s why, in recent years, unlike “Gladiator” or the TV series “Spartacus” which were commercial successes, movies set in ancient Greece have all failed to win real acclaim at the box office (think “Troy,” “Alexander“).

Movies set in the world of Greek myth (think “Clash” and “Wrath of the Titans”) have done well, but mostly because they are portrayed as a fantasy world that can look like whatever we want it to. It was the same story with the very successful film “300“—ancient Greek history for sure—but filmed in graphic novel style so that it looked like a fantasy world.

Who Were the Greeks?

The Greeks are known for giving us an amazing legacy across politics, language, drama, philosophy, science, art, and architecture. But what unites all those things is the spirit of their discovery.

Greece for my money was often an uncomfortable place to be: a seething mass of unsettled competition and uncertainty. But that also made it a place in which challenging the status quo and accepted wisdom was commonplace. And it’s that constant challenge to what we think we know and believe that, for me, is the Greeks’ greatest legacy. This insouciant spirit has, I think, right now caught our attention once again.

The ancient play “Antigone” is about the clash of men and women, duty and love, stubbornness and receptivity, the individual and the community. It challenges us to ask what is right, how should we govern and be governed in turn. The play “Medea” is about love, revenge, justice, and common decency. It forces us to watch a mother murder her own children to get revenge on their straying father, and dares us to argue such a course of action is wrong.

And the “Odyssey”? It’s a story of one man against the Gods—you can see why the “Hunger Games” people are drawn to it. But it’s more than that—it’s about heroism, belief, tenacity, growing up and finding your way home, finding your place in the world. And in doing so, it forces the spotlight back on us: Do we really know who we are? Are we comfortable in and with our world?

In a time when more and more people seem to have lost their sense of identity and belonging within our increasingly chaotic globe, perhaps a film about finding oneself, set back in ancient Greek myth, is just what’s required. And, it’s got monsters, seductive harpies, and powerful witches to boot.

Michael Scott is an associate professor in classics at the University of Warwick. This article was originally published on TheConversation.com