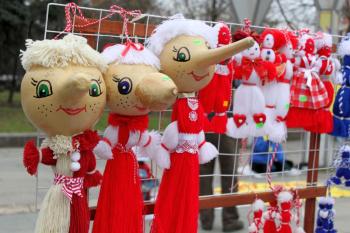 Kremena Krumova
Kremena Krumova is a Sweden-based Foreign Correspondent of Epoch Times. She writes about African, Asian and European politics, as well as humanitarian, anti-terrorism and human rights issues.
View profile
Follow
biggersmaller
Print
SOFIA, Bulgaria—The Bulgarian capital of Sofia was filled with red-and-white and people selling the best "martenitsa" from the stands sprouting like mushrooms everywhere in the downtown area.

March 1 is especially joyful in Bulgaria—with everyone hurrying to buy the red-and-white yarn ornaments known as martenitsa to give to friends and relatives, and wish them “Happy Baba Marta.”

“Baba Marta” (Grandma Marta) is an ancient Bulgarian custom welcoming the forthcoming spring. According to tradition, children, young ladies, and animals are adorned with the red-and-white yarn.

The original yarn has now transformed and is accompanied by every possible kind of attractive accessory—from plastic lipstick to colorful Spiderman. Bulgarians like to put many martenitsas on their hands, necks, bags, and even cars, hoping for good fortune.

The myth says that January and February, are said to have bad and cold tempers, had a sister named Baba Marta. She symbolizes the month March and is known for her inconsistent character—sometimes shiny, sometimes biting—just like the weather in March.

But despite her volatile and unpredictable nature, Baba Marta is said to bring good health, rich crops, and good fortune to those who wear the martenitsa. But it doesn’t stop on March 1.

Bulgarians believe you should keep your martenitsa until seeing the first stork or swallow return from their Southern migration. The tradition then requires one to attach the yarn to a tree branch, which is believed to bring happiness and a bountiful harvest.