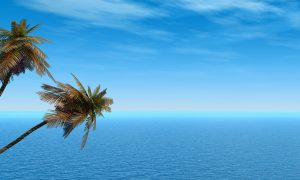 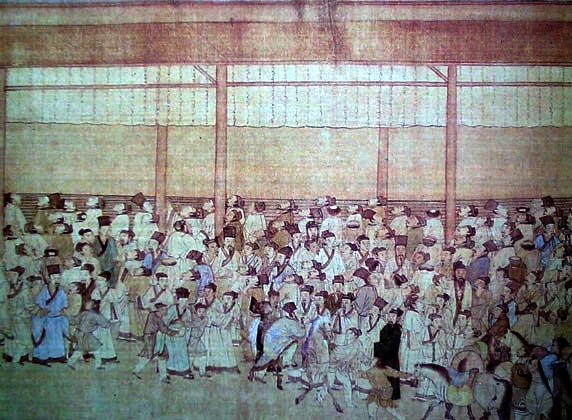 Yu Liangchen wished to become a scholar-bureaucrat, which was only achievable by passing the civil service exam. Here the exam candidates gather to see the exam results. A painting by Qiu Ying, circa1540. (Public Domain)
Chinese Culture

During the Ming Dynasty, Yu Liangchen and his peers created a community where members did good deeds and were forbidden to kill, visit prostitutes, curse, or talk behind others’ backs.

Yu ran this community for many years, yet he encountered misfortunes, one after another.

He and his wife had nine children—five boys and four girls—but four of the boys and three of the girls died early. The surviving boy was very smart and had two birthmarks on the sole of his left foot, and the couple loved him dearly. Sadly, at age 6, he disappeared while playing outside. Yu’s wife wept over the loss of her children and eventually became blind.

In addition, the family was by this time living in poverty.

Yu wondered why he was punished with such a horrible fate when he’d never committed any wrongdoing.

One evening, when Yu was 47, he heard a knock at the door. An old man was outside. After Yu invited him inside, the elderly gentleman explained that he had come to visit because he knew Yu’s family was feeling low.

Yu noticed that the man’s manner of speaking was not that of an ordinary mortal, so he treated him with deep respect. He told his guest that he studied hard and did good deeds his entire life but still had a horrible life.

“I have known about your family for a long time,” said the guest. “You have too many evil thoughts, you complain and pursue fame, and you dishonored the Jade Emperor. I’m afraid even more punishment awaits you.”

Stunned, Yu asked, “I know that a person’s good and evil deeds are all recorded in detail. I vowed to do good for others and controlled my behavior. How have I been pursuing fame?”

“It’s even worse that you claim you’re dedicated to doing good deeds. The Jade Emperor sent a messenger to check your records, and you’ve not done one single good deed in many years.

“On the contrary, your thoughts are filled with greed, lust, and jealousy. You elevate yourself through belittling others. You want revenge whenever you think of the past. With a mind this malicious, you can’t escape disaster. How dare you pray for blessings?” continued the guest.

“Master, you know all about me. You must be an immortal! Please save me!” cried Yu, panic-stricken.

The old man advised: “I hope you can abandon greed, lust, jealousy, and various desires. Don’t pursue fame and self-interest. Then you will be rewarded with goodness.” He then disappeared.

The next day, Yu prayed to heaven and swore to change. Determined to eliminate all improper thoughts, he gave himself a Taoist name: “Empty Thought.”

From then on, he paid attention to every thought and action. He saw to it that all of his deeds, whether big or small, effectively benefited others. Whenever he had the chance, he told people about the principles of karmic retribution.

At age 50, Yu was hired to tutor the son of Zhang Juzheng, the prime minister of Emperor Wanli. Yu and his family moved to the capital, and Yu passed the imperial exams the following year.

One day Yu went to visit the eunuch Yang Gong and met Yang’s five adopted sons. One of them—a 16-year-old—looked familiar to Yu. Yu learned that he was born in Yu’s own hometown, Jiangling, but was separated from his family when he accidentally boarded a grain boat as a child.

Yu asked the boy to take off his left shoe. When he saw two birthmarks on the sole, Yu exclaimed, “You’re my son!”

The shocked eunuch was happy for them and immediately sent the boy to Yu’s residence. Yu rushed to tell his wife the good news. She cried so bitterly that her eyes bled. Her son held her face with his hands and kissed her eyes. Suddenly, her vision returned.

Yu was overcome with both grief and joy. He no longer wanted to be a high-ranking official and asked to return to his hometown. Admiring Yu’s moral character, Zhang approved his request and sent him a generous gift.

Back home, Yu worked even harder for others’ benefit. His son married and had seven children, who carried on their grandfather’s tradition. Influenced by them, people truly believed that karmic retribution is real.