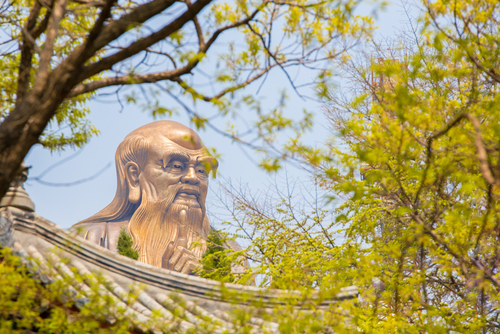 Ancient Chinese Stories: What Is True and What Is Not?

Who’s the Insane One?

Feng Shi from Qin State had a son who was a sweet and smart child. As he grew up, it was evident that he was different. When others sang, he said they cried. When others saw white, he saw black. When others smelled a nice fragrance, he smelled a disgusting odor. When others found food bitter, he found it sweet. He perceived the mortal world as the complete opposite of what others perceived.

Soon, people began spreading rumors that Feng Shi’s son was insane. Feng Shi was consumed with worry over her son’s mental illness. She heard that Lu State was the land of righteousness and propriety. It was home to more noble men than Qin State was, and even Confucius lived there. Hoping that someone in Lu State could cure her son, Feng Shi packed their bags and set out with her son.

On their way, they passed through Xiangyi City, where they encountered a mysterious white-haired man. The elderly man was Laozi. Feng Shi told the great sage about her son’s illness and their quest for treatment in Lu. In response, Laozi laughed loudly.

“How do you know that your son is insane?” questioned Laozi. “No one is able to distinguish between right and wrong nowadays. People confuse right with wrong and wrong with right.”

Laozi continued, “Self-interest and fear of personal loss drive people to perceive the world upside down. That is true insanity. Since everyone is insane, they don’t realize their insanity. If people instead spoke like your son, then you would be regarded as crazy. The so-called noble men of Lu are the most confused. They rule by appealing to popular whims rather than common sense! Your son is clearheaded, yet you want mentally ill people to treat him. Isn’t that funny? Take your fine son and go back to Qin State.”

The Realm of a Cultivator

Hakuin Ekaku (1686–1769), known in Chinese as Zen Master Baiyin, is a major figure in the history of Japanese Zen Buddhism.

Once when Hakuin Ekaku went out to beg for alms, the owner of a household refused to give him food. Hakuin did not mind and kept standing outside the door. This made the owner of the house very angry. In a rage, the owner picked up a broom and hit the Zen master, causing him to faint right then and there.

A family who ran a store near where Hakuin lived had a beautiful daughter, but she was unmarried and pregnant. Her parents were humiliated and demanded to know who the father was. The daughter wanted to protect the identity of the young man. She knew that her father respected Hakuin tremendously, so she said the Zen master was the one who impregnated her. Her parents took her to the temple and confronted Hakuin, who gently replied, “Is that so?”

After the baby was born, they took the baby to the temple and told Hakuin, “Here’s your vile spawn!” News spread fast, and everyone came to the temple to condemn the Zen master as a wolf in sheep’s clothing. Hakuin was not troubled and took good care of the child.

A year later, the daughter could not bear the mental torment from her lie anymore. She confessed the truth to her parents. Her parents felt deeply remorseful. The entire family rushed to the temple to apologize at length to Hakuin. He willingly returned the child, saying only, “Is that so?”

All of these experiences were painful, but they counted as cultivation. Cultivators who reach a realm like this have great tolerance.

Translated by Dora Li into English, these stories are reprinted with permission from the book “Treasured Tales of China,” Vol. 1, available on Amazon.