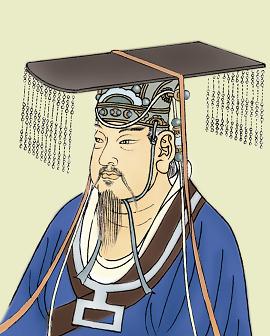 Yu Shun, also known as Chong Hua, had a father, named Gu Sou, who was blind. His stepmother gave birth to a boy named Xiang. Much like his parents, Xiang was very vicious toward Shun. Their father liked Xiang very much and always looked for a chance to get rid of Shun.

One day, Shun’s father asked him to climb up onto a barn roof to repair it, and then he sneakily set the barn on fire while Shun was fixing the roof. Using two straw hats like wings, Shun flew down and escaped the fire.

Not long after, Shun’s father asked him to dig a well. Realizing that his father might try to kill him again, Shun secretly made a side hole that led to the outside. While Shun was digging deeper and deeper, Gu Sou and Xiang began filling the well with soil, attempting to bury Shun alive. Shun escaped through the side hole. Gu Sou and Xiang were very happy since they thought that Shun was definitely dead. They then planned to take away his property.

However, just like any other day, Shun showed up to greet his parents and continued to take care of them whenever they needed him. He also continued to love his brother with a kind heart. Even though he knew that the whole family wanted to kill him, he was still very loyal to them. After that, whenever the family wanted to kill him, they could not find him; but when they needed help, Shun was always there for them.

By the age of 20, Shun was already very well-known for his virtue and for inspiring others. When he cultivated farmland in Lishan, farmers in Lishan stopped squabbling over each other’s land boundaries. When he was fishing in Leize, fishermen in Leize tried to let others take the best fishing spots first. When he was working on pottery production along the banks of the Yellow River, not a single piece of defective pottery was made. After only three years, the small town where he was working became a big city.