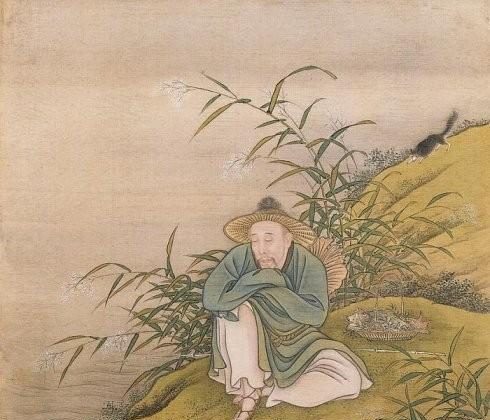 The Emperor depicted as a fisherman. From “Album of the Yongzheng Emperor in Costumes,” by anonymous court artists, Yongzheng period (1723–1735). One of 14 album leaves, color on silk. The Palace Museum, Beijing. (Public Domain)
Chinese Culture

In the spring of the 13th year of the Tianbao period (circa A.D. 754) of the Tang Dynasty, Liu Cheng and Li Hui often took big boatloads of fish and crabs to sell between Wu and Yue states.  One day, they loaded a boat full of fish in Xinan and were on their way to Danyang County.

It was dark when they arrived in Chapu, so they decided to stop and find a place to sleep. Li Hui wanted to go to the village and left Liu Cheng alone on the boat. Heavy clouds covered the sky, and it was quiet, with no sign of anyone around. Suddenly, Liu Cheng heard a man’s voice calling mournfully, “Amitabha!” He jumped up and checked the boat’s cabin. He saw a big fish, with a vibrant-colored beard, shaking its head and calling out with a human voice, “Amitabha!”

Liu Cheng was so scared that his hair almost stood up straight. He jumped off the boat and hid in the reeds to see what would happen next. Then, thousands of fish in the cabin all jumped around shouting the Buddha’s name. The sound was earthshaking. Once their brief outburst was finished, the terrified man hastily threw all the fish back into the river.

Not long after, Li Hui came back, and Liu Cheng told him all about it. Li Hui said angrily, “Where did you come up with such a strange story! It’s just nonsense.” He cursed him for a long time. Liu Cheng didn’t know how to convince Li Hui of the truth, so he used his clothes and silver to pay him back for the fish.

Cheng had only one silver piece left. With it, he bought more than a dozen bundles of hay that he could take and sell elsewhere. He put them on the riverbank. The next day, Cheng tried to move the hay onto the boat but felt the hay was very heavy. So he opened up the bundles and found 15 strings of coins, which was a large amount of money in those days. There was a piece of paper attached that said, “This is the money for the fish.” Cheng felt even more surprised.

On the same day, in Gua State, Cheng met a group of monks eating their meals and gave the money to them. A retired county head called Wan Zhuang happened to be passing through the area at the time. He heard of this matter in detail, recorded it, and handed it down to the generations.

Reprinted with permission from Zhengjian (Pure Insight) and translated by Dora Li.