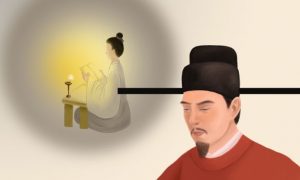 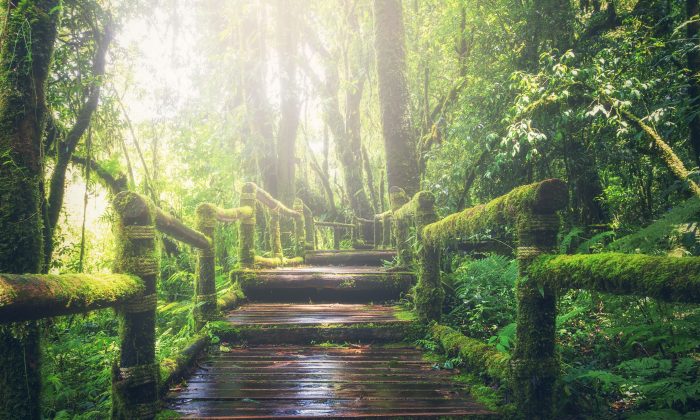 Ancient Chinese philosopher Laozi once said: “A massive tree—so wide that it takes two men to wrap their arms around it—began as a tiny sapling. A nine-storey pagoda began as a pile of dirt on its foundation. A journey of a thousand miles begins with a single step.” (Pixabay)
Chinese Culture

“Continuously dripping water eventually penetrates a large stone,” an ancient Chinese saying tells us. In other words, we shouldn’t dismiss actions that appear small or insignificant, as they can result in big effects over time. Great deeds are achieved by modest but continuous efforts. Likewise, grand plans can be disrupted by the growth and accumulation of slight mistakes.

China’s 5,000-year history is filled with meaningful stories of how small actions—positive or negative—ultimately led to big changes. We begin with the story of a young man eager to take on the world before learning to take care of his own house.

Start by Sweeping Your Own House

“The Book of the Later Han,” which covers Han Dynasty history from A.D. 6 to 189, has a story about a proud chap named Chen Fan. Chen was ambitious and wanted to achieve great things, but he didn’t bother keeping his own life in order. As a result, his room was constantly filthy and chaotic.

One day, Xue Qin, a friend of Chen’s father, came to visit. When he saw how dirty Chen’s room was, he asked Chen, “Why don’t you clean up your room?”

Chen replied, “As a man of great ambition, why should I waste time on trivial things like sweeping my room, when I should be focusing on sweeping the world off its feet?”

Xue Qin mused, “How can one achieve great things when one can’t even keep his living space clean?” His remark left Chen speechless.

Ancient Chinese philosopher Laozi once said: “A massive tree—so wide that it takes two men to wrap their arms around it—began as a tiny sapling. A nine-story pagoda began as a pile of dirt on its foundation. A journey of a thousand miles begins with a single step.”

In his book “Wei Xue” (“To Learn”), Qing Dynasty writer Peng Duanshu tells the story of a rich monk and a poor monk who lived in Sichuan Province in southwestern China. Both wanted to make the pilgrimage across the South Sea to India to pay their respects to Buddha.

The rich monk said to the poor monk: “I’ve tried for several years to hire a ship to sail across the sea. My plans have yet to reach fruition. What do you have to rely on for making the trip?”

A year later, the rich monk still hadn’t left his home, while the poor monk had already returned from his pilgrimage. The poor monk told the surprised rich monk, “Throughout my journey, I relied only on my water bottle and begging bowl. They were all I needed to fulfill my wish.”

The poor monk achieved his goal by taking one step at a time, relying only on courage and will. By contrast, the rich monk held on to his dream like a castle in the air, talking about his aspirations but failing to act. Their different mindsets produced quite different outcomes.

The Taoist text “Liezi” tells a story about Yu Gong, age 90, who leveled two mountains by sheer faith and perseverance.

Yu Gong lived near two mountains on the north bank of the Yellow River. They were over 700 miles wide and several thousand feet high. People traveling to or from the river had to take a long detour around the mountains.

After years of witnessing this, Yu Gong finally decided that the only solution was to move the mountains. He and three sons and grandsons went to the mountains to break up the stones and dig up the earth. They then transported the stones and earth to the banks of the Bohai Sea.

Zhi Sou, who lived on the river bend, laughed at Yu Gong. “With such minuscule manpower, how can you hope to level two mountains?”

Yu Gong replied: “Even after I’ve passed on, my sons will continue this work. They will have grandsons, who will have great-grandsons. My family will always have future generations to carry on, while these mountains won’t grow any bigger. They will be leveled one day. What have I to worry about?”

Zhi Sou was at a loss for words.

Despite his advanced age and limited strength, Yu Gong had no doubt that his lofty goal would be attainable with steady, continuous efforts.

Indeed, his faith and determination touched the Heavenly God, who instructed mighty deities to help him move the mountains. From then on, travelers could reach the Yellow River without any obstruction.

In daily life, our minor habits and thoughts are not insignificant. Those that are positive have a good chance of helping us ultimately fulfill our goals. Similarly, those that are bad can magnify and multiply over time, manifesting as grave consequences in the end.

“Shi Ji” (“Records of the Grand Historian”), completed around 94 B.C. by early Han Dynasty official Sima Qian, recorded that King Zhou, the last king of the Shang Dynasty (about 1556–1046 B.C.), once received a pair of ivory chopsticks that he adored.

Seeing this, his adviser Qi Zi sighed and said, “The more the king cares about these chopsticks, the more he might think they can only be paired with bowls made of rhino horn and cups made of white jade.

“With such fine wares, he will want them to hold only the best delicacies. Being used to such delicacies, he will desire only the most expensive silk robes and majestic palaces.

“The luxuries within our borders will eventually prove insufficient, and the king will wish to acquire rare, exquisite items from other countries. From these chopsticks, I can already see what will unfold. I can’t help but worry for the king.”

After his defeat, King Zhou set fire to his palace and treasures and committed suicide by throwing himself into the flames.

Instead of curbing his desires while they were still small, King Zhou let his greed swell untamed. What was once a minor flaw became a major catastrophe, which ultimately cost him his kingdom and his life. His story conveys an important lesson: One would be wise to constantly reflect upon and rectify one’s shortcomings before they turn into serious issues or even disasters.