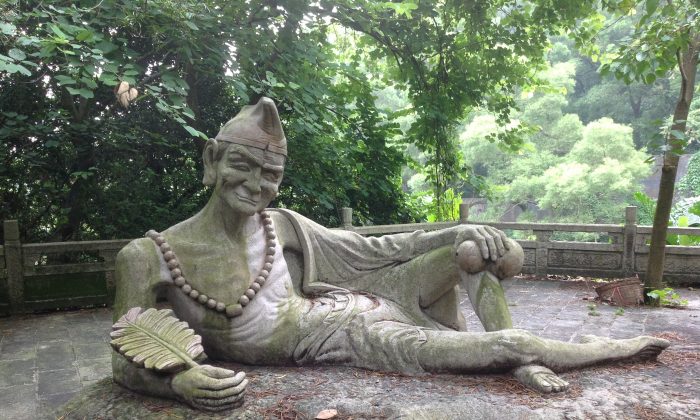 Monk Jigong was known to help the poor and stand up to injustice. A statue of Jigong, the monk, in Wanzai Zhuxian Cave Park in Zhuhai, China. (Public Domain)
Literature

Ancient Chinese Stories: A Jigong Story, Good or Evil From One Thought

Jigong was an eminent monk of the Southern Song Dynasty (1127–1279) who was also known as Daoji. There were many legends passed down about Jigong saving people with his supernormal abilities. Thus, in popular culture today, many stories about Jigong helping the poor and punishing evildoers have circulated.

One day, Jigong was collecting alms as usual when he saw a dogmeat seller relieving himself in an outhouse. Two baskets of meat and the shoulder pole for carrying them were lying on the side of the street. Jigong saw with his celestial eye that the outhouse was going to collapse soon and that the dogmeat seller would be buried and die there. Jigong thought, “No. He shouldn’t die, for he is a great example of filial piety for the world to learn from.” Then he went over, picked up the shoulder pole, and ran off with the baskets of dogmeat. At the top of his voice, Jigong called out, “Look! No one wants these two baskets of meat! I will take them to my temple!”

The dogmeat seller heard this and, losing no time, rushed out of the outhouse, holding up his pants with both hands. He was shouting, “Hey, monk, don’t you grab my baskets!”

After running only a few steps, he heard a loud “Boom!” behind him. When he looked back, he was stunned to find that the outhouse had collapsed. He became scared and thought, “Oh my goodness! Thanks to the monk, I was saved. Otherwise, I would have been crushed to death.” Jigong laughed and returned the baskets to him.

Jigong said to him, “You are a dutiful son. Go right home after you finish selling the meat; your mother is waiting for you there.”

The dogmeat seller, named Husan, had been doing business for many years. He was living on Qiantang Street with his mother and wife. Husan liked to be agreeable with other people, but he was never agreeable with his mother. Early in the morning, he often argued with her and even spoke to her with a very rude attitude. His wife was a kind lady, and she often gave him advice, saying, “Your mother is so old; please do not make her angry.” Husan would say nothing and just carried on with his business.

One day, Husan was cooking meat at home and asked his wife to look after it while he left the room. He took out two dogs, a mother and a son, which he had just bought at the market. Husan tied up the mother dog and carried the son dog on his shoulder. He put them in the courtyard and went inside the house to get a big knife to kill the dogs with. He put the knife in the courtyard and went back to the house to get a basin, but when he returned to the yard, he could not find the knife. He asked his wife, “Did you take the knife?”

After searching for a while, he found that it was under the son dog. The son dog saw that Husan was going to kill his mother, so he immediately carried the knife away in his mouth and put it under his body. Husan immediately kicked the son dog away, but the son dog ran over and lay on the neck of his mother. With bared teeth, the son dog stared at Husan. Tears dropped from the son dog’s eyes. Looking at this, Husan was stunned. He threw away the knife and ran into the room with a loud call. His wife was terrified by his shouting. Husan thought, “I am not even better than a dog. Even a dog knows where he came from; shouldn’t a human being know it?” After that, he went to the yard and spoke to the two dogs: “Okay. I am not going to kill you anymore. If you want to stay, you may stay and I have food for you. If you want to go, you can go.”

He went to his mother’s room, knelt in front of her, and said, “Sorry for my disrespectful behavior. I am guilty.”

His wife said, “From now on, as long as you are good to your mother, our lives will be happier.”

Husan then said, “After we sell the dogmeat in the pot, I will change my profession and not kill animals anymore.”

Husan went out that day and suddenly felt he needed to relieve himself. He laid the baskets on the side of the street and rushed to the outhouse nearby. Unexpectedly, the outhouse collapsed, but he was saved by Jigong. People might ask why Husan was called “a great example of filial piety” since he was so rude to his mother.

This story shows that there is only one thought that differentiates between good and evil. Although Husan was not respectful toward his mother, once he realized he was wrong, he changed right away and showed his mother deep respect and filial piety. His kind thoughts came out and his behavior followed suit, such that his evil thoughts disappeared completely. That is why Jigong called him “a great example of filial piety for the world.”

In the same way, if a person has been doing good for many years but one day suddenly has an evil thought, this evil thought may lead him to do evil, and all the good he did before would be canceled out. At the moment when the thought occurs, even if he does not do anything evil, he is already a truly evil person in the world. Thus, one must choose a lofty destination and walk toward that destination, although it is far off. Since one has already started in that direction, sooner or later one will reach the destination. Choosing good or evil comes from just one thought. This kind thought is so important, and we refer to it as “the Buddha light shines everywhere.”