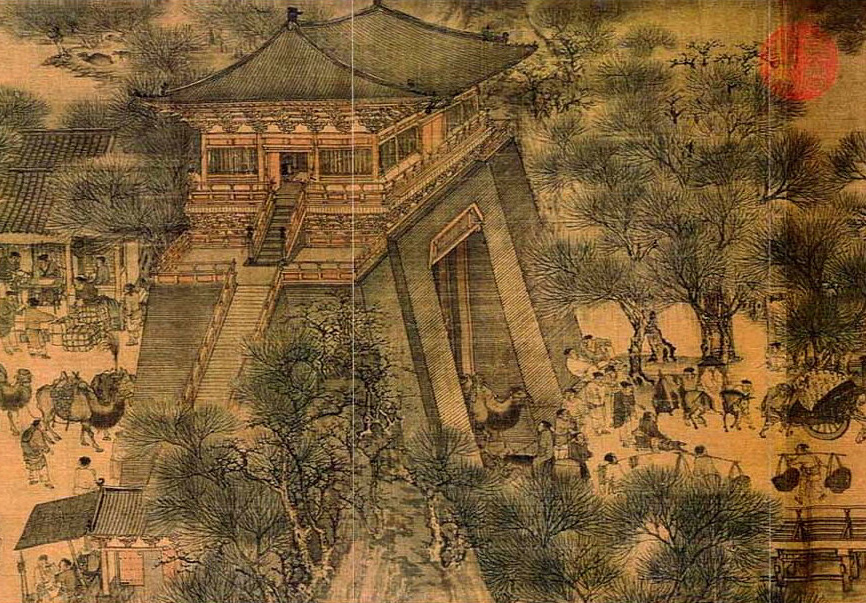 One section of “Along the River During the Qingming Festival,” Zhang Zeduan (1085–1145). (All photos Public Domain)
Arts & Tradition

Ancient Chinese City Life: ‘Along the River During the Qingming Festival’

In his “Along the River During the Qingming Festival,” Zhang Zeduan (1085–1145) presents each house, boat, shop, or food stall in such vivid detail and depicts people from different walks of life that the ancient Chinese might have tried to picture themselves in the scroll while they were viewing it. For us in the 21st century, it offers a cinematic entry into the distant past and a chance to reflect on what urban landscapes encompass.

It is an ancient Chinese belief that a city is an industrial engine designed by cosmic mandate. The Shang Dynasty character for a city was essentially a kneeling person behind a city wall. The city wall not only serves as a defense for the people inside but also symbolizes the power of the state.

Just like all ancient civilizations, the ancient Chinese civilization rose along riverbanks. “Along the River During the Qingming Festival” illustrates an urban city along the Bian River, which was the life vein of the Northern Song Dynasty. This more than five-yard-long handscroll depicts urban life during the flourishing Song economy. Bustling with commercial activity, the scene is set in the Northern Song capital of Bianjing, or present-day Kaifeng in Henan. Ancient China had some of the world’s largest cities by 1100, the time ingeniously captured in this scroll.

The title of this piece suggests that the scene takes place during the Qingming Festival, which is a grave-sweeping festival that comes in April, 100 days after the winter solstice.

However, traditional festivities such as tomb sweeping and the worshiping of ancestry are not directly illustrated, but the artist drops hints here and there that illustrate the traditions. (Qingming, by the way, can also translate to mean “peaceful and orderly,” and as there are no beggars or slums shown, the scroll can perhaps be interpreted as an idealization of the Song city.)

Handscrolls such as these were meant to be viewed one section—an arm’s length—at a time and from right to left. Unrolling the scroll reveals the splendors of the city filled with streets, bridges, buildings, shops, restaurants, and lively crowds, taking us on a journey along the river. Overall, it offers a panoramic view of the city, which can be compared to screening a long take in a film shot.