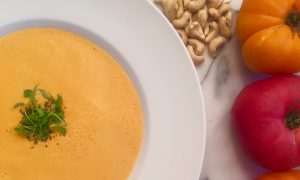 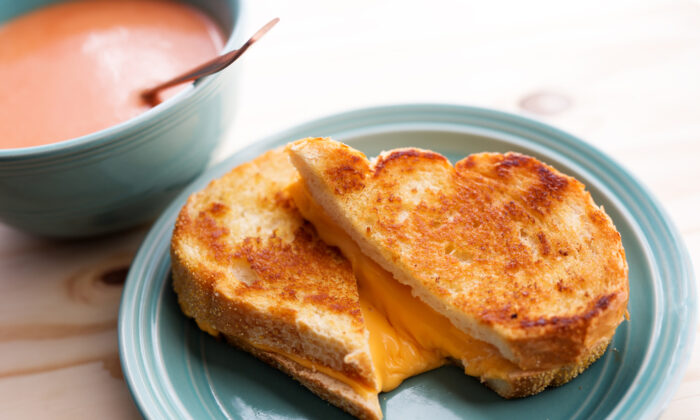 Don't mess with a classic: The soup is Campbell's. The bread is white. The cheese is orange. (Aimee Lee Studios/Shutterstock)
Recipes

Anatomy of a Classic: Grilled Cheese and Tomato Soup

The thrifty, comforting meal was a Depression-era staple; in this version, an egg adds a little luxury
By Ari LeVaux
Print

I somehow made it through childhood with minimal exposure to what I now realize was, for many, a cherished part of many a growth spurt: a grilled cheese sandwich alongside a bowl of tomato soup.

This iconic lunch combo, as American as a burger, wasn’t in my parents’ cooking rotation, and my friends were hippies or Korean and it wasn’t on their menus either.

And forget about school lunch. It only took a sloppy Joe or two, and one of those reddish dry slabs they shamelessly called “pizza.” I learned at that early age the importance of packing a lunch, and remember being dimly aware that the school lunch eaters sometimes had grilled cheese and tomato soup, but was never intrigued.

I had no idea how glorious it would be to bite into the dunked edge of a grilled cheese, at once crusty and soggy, dry and wet, acidic and fatty, melty and cheesy. I can now see how for many, this dish was eye-opening.

It’s also a hearty meal, a complete source of protein and vitamin C, which is why during the Great Depression, school cafeterias stockpiled cans of tomato soup and grilled cheese materials.

I knew none of this until a Los Angeles-based client reached out, asking if I would investigate a certain Depression-era meal from southwest Montana.

“My Grandma Fay, who lived in the Bitterroot Valley up the Burnt Fork, used to prepare tomato toast, which was basically a piece of toast smothered with a creamy tomato sauce. She probably used real cream back in the day, topped with a cooked egg if you had ’em.”

I never did track down out Grandma Fay’s recipe, but the research process, and the keywords involved, occasionally brought me to corners of the web occupied by crusty grilled cheese sandwiches and smooth, tangy tomato soup.

The archetypes and keywords were on my mind when friend of the column and noted novelist Chad Dundas (most recently: “The Blaze”), tweeted despairingly, “Perhaps my biggest disappointment as a father so far is my children’s unwillingness to recognize the splendor of pairing grilled cheese sandwiches & tomato soup. They could take or leave it & I’m considering petitioning for a DNA test.”

The nuance of the discussions in the comments to his tweet included topics like how best to cut the sandwich (corner to corner), and spirited spats over chunky tomato soup. One chap had a thing for Goldfish crackers swimming in the soup.

Dundas may not be Grandma Fay up the Burnt Fork, but I knew I needed this man of letters as my guide, like Dante needed Virgil, with his unconscious understanding of the goal. He’s not looking for angles to improve upon perfection. The soup is Campbell’s. The bread is white. The cheese is orange.

I brought home those ingredients, and the next thing you know, I’m making out the combo for my kids, who are all wolfing it down like it was their first taste of food. Soon my kids’ hungry, unmasked friends were over, also wanting food. When the dust settled, I had stuffed six little bellies for about $7.

Put an Egg in It

“Have you added any something-something in the intervening years of single and family living, any secret sauce you bust out when everyone is asleep and you need some midnight power?”

He didn’t text back, and I felt awkward.

Alone to my own devices, and in honor of Grandma Fay’s tomato toast, I worked on cooking an egg in the middle of the grilled cheese, which turns out to be pretty tasty, like a cheesy egg-in-a-nest. Then I turned my attention to the soup.

The Campbell’s label suggests mixing the contents with a can of milk or water, which if done right also salvages whatever soup clings to the can—an important Depression-era trick. But I found milk dulled the tomatoey sharpness, which lessened the dramatic contrast between soup and sandwich. The soup already has bread mixed in, which adds a certain bisque-like creaminess, even without milk or cream.

If you have serious soup eaters, that can of water is the way to go, but I kept finding leftover soup after the sandwiches were long gone. Now I leave it thick. With added garlic and black pepper. And hot sauce.

Finally, Dundas got back to me, after having given it some thought. He suggested perhaps making a second sandwich.

It was a bit too little, and a bit too late. But hey, Virgil only brought Dante within sight of the summit.

In a heavy-bottomed saucepan, heat 2 tablespoons of oil over medium heat. When the oil is hot, add the garlic and pepper. After about a minute of fragrant stir-frying, add the soup to the sizzling garlic oil, mixing it quickly. After a minute of heat, turn it off and make the sandwich.

To a heavy-bottomed pan pre-heated over medium, add a tablespoon of oil. Swish a slice of bread around the pan like you’re mopping up gravy, then add the cheese and egg: arrange the thin rectangles of cheese in a frame around the edge of the bread, and crack the egg in the middle. Add the second slice of bread on top. Pour the last tablespoon of olive oil on top of the upper slice.

When you smell the bottom start to burn, flip the sandwich and cook the same amount of time on the other side. Allow it to cool to a safe temperature, and slice corner to corner.