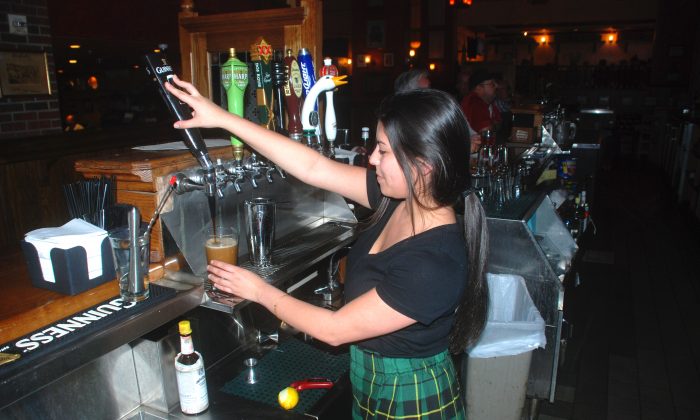 The entire bar was disassembled in Ireland and shipped across the Atlantic where it was installed at Sheraton Orlando North’s An Tobar Restaurant. Draft beers and whiskeys are plentiful. (John Christopher Fine, Copyright 2016)
Destinations

Whether it is on St. Patrick’s Day or at any other time, Chef Joseph McFadden is ready with a lark, a smile, a good story, and fine Irish food. He’s not in the usual Irish enclaves of New York or Chicago. He was imported to Maitland, Fla., into the bosom of An Tobar, an authentic Irish pub with its enormous kitchen located off the spacious lobby of the Sheraton Orlando North Hotel.

“Tobar means ‘the well,'” Colleen Parnell explained. Parnell, also of Irish heritage, is Sheraton Orlando North’s director of sales and marketing, and she has her finger on the green pulse that throbs through the pub. An authentic Irish imported long bar takes up a whole side of the restaurant and bare wood tables add to the atmosphere, reminiscent of a country pub.

“I just sent over some Guinness bread. Do you like it? Just out of the oven.” You couldn’t help but like the bread and the chef, with his broad smile and happy disposition. “I’m the only one that knows the recipes,” he said, with a laugh. McFadden is in the process of training the hotel’s kitchen staff to cook his dishes.

Brought up in Dunfanaghy in County Donegal on the northwest corner of Ireland in a small seafood village, McFadden’s mom had a bed and breakfast. “I was used to the hospitality trade young in life,” he said cheerily.

His is an ordinary tale of a 14-year-old boy starting out washing dishes in a local restaurant until they let him prepare vegetables, then salads. He attended Killybeggs Culinary College, came across to work in restaurants in Boston, moved back to Ireland where he cooked at four-star hotels in Donegal until he took over as executive chef at Oysters Restaurant in Strabane. The restaurant won the distinction of twice being named best restaurant in Northern Ireland.

“Now I’m here,” McFadden said, as he produced a whole-wheat Guinness pancake topped with a fleurette of salmon. Quite artful and appealing, it was also tasteful and fresh.

“I want you to try my shepherd’s pie. I make it with lamb,” McFadden said when next he appeared in the restaurant carrying a round crock topped with mashed potatoes and sprinkled with shredded carrots and a sprig of sage for decoration.

“We have one of the area’s largest selections of scotches and whiskeys,” Parnell offered. She was quite keen on the fleurette of salmon, so pretty a flower it was almost a shame to pluck it.

“I’ve got Irish banger meatballs with Colcannon potatoes mashed with cabbage, leaks, ham, and red onion marmalade,” McFadden explained. As St. Patrick’s Day approaches, he is pressed to conclude his new restaurant menu. He insists everything be authentic Irish cuisine.

He shared his delectable plans: “I’ll do braised lamb shank with butternut squash; also cinnamon and vanilla crusted pork belly with apple pickle. We get fresh seafood here every day from Tampa and Miami. I’ll do seared scallops.”

An Tobar has amazing fare reminiscent of Ireland. The excellent food is accompanied by the relaxing ambiance of a nearby swimming pool and hot tub between rocks with a cascading water fall, banana fronds, and palm trees.

“Did you like my fish and chips?” Joe asked. The breading was so fine it flaked off tender chunks of fish. The fries were hand cut and browned to perfection.