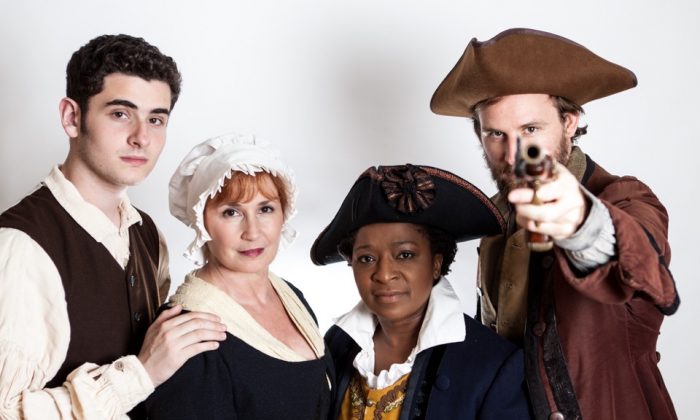 Looking for a musical for the whole family that will not break the bank? The answer is Theatre East’s “Devil and the Deep,” a new musical retelling of Robert Louis Stevenson’s children’s classic, “Treasure Island.”

The big name in the production is Graham Russell of Air Supply, who wrote the music and lyrics with Katie McGhie. Melissa Bell wrote the book and additional lyrics.

The show basically follows the plot of the novel, albeit with some modifications. Stevenson’s story, written for his stepson, omitted women except for Jim Hawkins’s mother. “Devil and the Deep” includes a number of female characters, one of whom is a pirate. The Playbill contains a history of women pirates as well as a glossary of the antiquated seafaring terms.

At the beginning, Jim Hawkins (Ethan Gabriel Riordan) and his widowed mother (Raissa Katona Bennett) are operating the Admiral Benbow Inn in Bristol, England, during the middle of the 18th century. One night, a mysterious sailor named Billy Bones (Kire Tosevski) appears with a chest he zealously guards. Bones warns Jim to beware of a one-legged sailor. After receiving a vague threat from the blind Pew (Kyle Minshew), Bones suddenly dies. It’s unclear if the cause is the confrontation with his former confederate or Bones’s excessive rum drinking.

Jim discovers some gold coins, jewels, and a map in Bones’s trunk. He shows it to family friend Captain Smollet (Bill Newhall), who agrees to set sail for the Caribbean in search of the treasure. Against his mother’s wishes, Jim goes along as the cabin boy of the Hispaniola.

Smollet’s second-in-command is Mizzy Hands (Lisha McKoy) and the cook is the one-legged Long John Silver (Eric Coles), a likeable character with a parrot named Cap’n Flint on his shoulder. Silver befriends Jim, but he turns out to be the pirate Bones was worried about. When the ship reaches Skull Island in the Caribbean, Silver leads a mutiny, killing one of the loyal seamen.

On the island, Jim finds Benita Gunn (Courtney Shaw), marooned on the island three years earlier. (In the novel, the character was Ben Gunn; in this version, Benita is supposedly his daughter.)

After some vigorous fighting (choreographed by Alex Reed), the mutineers are defeated. Jim returns to England, where he has an emotional reunion with his mother. Shortly afterward, he learns that the amiable villain Silver escaped from custody.

Theater 3, in the modest digs that also house the Mint Theater, manages to do a lot with limited space and resources. The two-man band is a piano and guitar duo and the parrot Cap’n Flint is a puppet held by the expressive Skyler Volpe (who gets to sing a rollicking song with a Jamaican accent).

The foot-stomping choreography (somewhat reminiscent of Steven Hoggett’s work in “Once” and “The Last Ship”) is by Sarita Lou. There is also a dolphin puppet that swims across the stage, carried by the graceful Kalyn West. She also plays Annie and is a member of the ensemble. The puppetry design is by Tanya Khordoc and Barry Weil of Evolve Company.

The score is tuneful and the cast members put over their songs with panache. Lisa Devine’s direction keeps the action moving, although there is a bit of overacting by Bones and Pew in the first act. Riordan is a find as Jim Hawkins, although he is a bit older than those usually seen in the role. Coles is younger and concededly blander than most of those who have played Long John Silver, which include Wallace Beery, Robert Newton, and Charlton Heston.