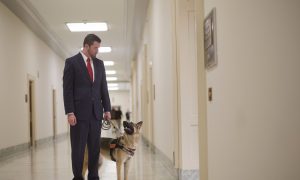 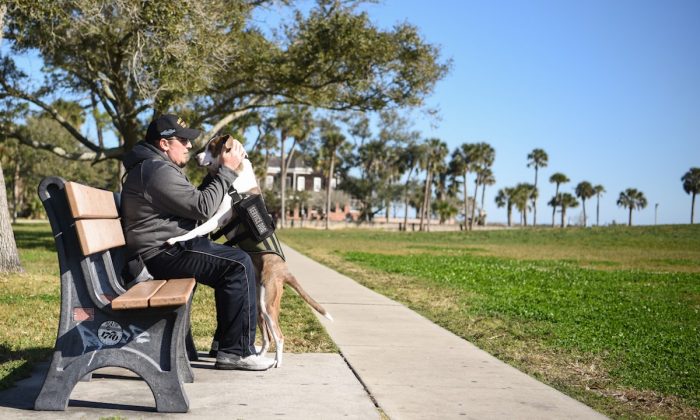 Many of our nation’s veterans suffer from PTSD, and there are a variety of different courses of treatment. This Iraq War veteran contends with PTSD and suffered a traumatic brain injury. Now, he’s found solace from his wife and service dog.

Jeremiah Galembush is 39 years old and lives in Latrobe, Pennsylvania. When he was 25 years old, he was deployed to Mosul, Iraq.

For the first few months, Galembush became accustomed to the routine of patrols. The reality of being in a war zone didn’t sink in until his platoon was ambushed. Tragically, his unit lost soldiers during the fight.

“After that point it kind of started to sink in that this is real,” Galembush told The Epoch Times.

Galembush was much more cautious for the rest of the deployment. Furthermore, he felt a sense of vengeance toward the enemy.

The day he returned from a mid-tour leave, his company was involved in another ambush in which they lost another soldier. He was able to listen to the fight on the radio as it was happening.

“It definitely changed the way I looked at things,” Galembush said.

Galembush had a free day every week, but he hated having his day off. He felt like it was his responsibility to be on patrol, particularly because he was familiar with the roads and how to get to certain locations in country.

Just three weeks before the last patrol of their deployment, the unit lost a soldier on one of his days off.

Another aspect of the war that Galembush struggled with was taking life as he had grown up Catholic. Initially, he didn’t feel any regret for killing the enemy during the first ambush they experienced.

However, a few days later he was speaking with the chaplain, and he felt guilty for what he had done.

“I felt like I was the most horrible person in the world,” Galembush said. “My whole life from that point basically to this very day started to change.”

Galembush returned from deployment in October 2005, and had separated from the Army by December 2005.

Returning back to the civilian world was difficult for Galembush. The nightmares had started before he had separated from the Army, but he felt compelled to bury his feelings and go to work for his family.

Galembush discovered he was angry at himself, and angry at the world.

“I watched the internal battle within myself just start to eat away at me,” Galembush explained.

Unfortunately, his first marriage ultimately fell apart. He didn’t have trouble keeping a job, but he did have difficulty maintaining relationships.

On top of nightmares, Galembush started to notice other symptoms of PTSD after he remarried. He found himself experiencing blackouts, and getting furious at everyday nuisances like traffic. His first wife was also a trigger for his anger.

Galembush would get angry so easily that went to great lengths to avoid confrontation. Consequently, he found himself becoming isolated.

There was also a serious blackout in which Galembush regained consciousness and found that he had sustained a deep gash to his wrist.

The isolation combined with this blackout episode culminated in the end of his second marriage.

Galembush had friends who struggled and continue to struggle with PTSD. He would watch them decline by the activity on their Facebook group, and felt like there was nothing he could do to help them.

His vehicle commander, who he had been close with in combat, passed away from drug and alcohol abuse. In another instance, another one of his fellow soldiers died suddenly. Galembush had a close brush with suicide himself.

“That just eats away at you,” Galembush said.

Galembush met his current wife Christina in 2014, and she was the person who helped him slow down. She helped him keep himself present, and then he was able to recognize his symptoms and address his PTSD.

“Christina was a savior,” Galembush said.

He wasn’t completely healed, but discovered that he could have a life.

While he and his wife were watching “Cutthroat Kitchen” one evening, he learned about an organization one of the chefs was supporting called K9s for Warriors. His wife looked up the organization and suggested he apply.

When Galembush met his service dog Vinny in January 2019, he experienced a deluge of emotions.

“It’s like seeing your child for the first time,” Galembush said.

Since the two have met, they’ve developed a profound relationship. In fact, Vinny will not leave his side.

Vinny is able to sense when something is wrong. He’ll lean up against Galembush, and paw at him. Moreover, Vinny simply calms him. Taking care of Vinny also gives Galembush a routine.

Galembush has also discovered that Vinny helps him avoid isolation by helping him remain calm in public. Galembush and his wife are now able to go out to dinner and grocery shopping with Vinny’s help.

“Now Vinny is there laying underneath the table, and I can do it. I know I tell myself ‘Yeah I can do it. He’s here,'” Galembush said.