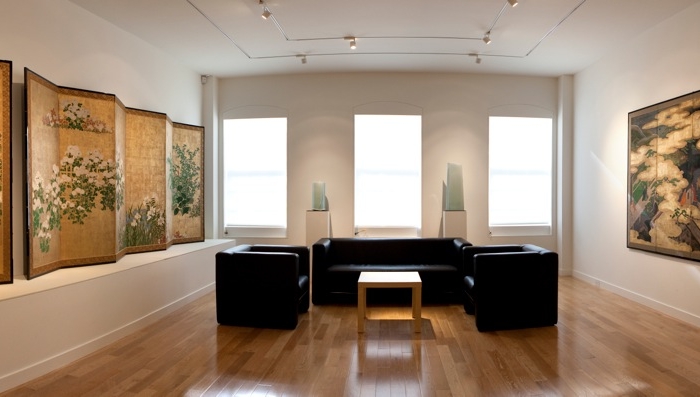 An Introduction to Japanese Folding Screens

Among all the Japanese decorative arts, folding screens take the prize for adaptability. Their surfaces are as suitable for depicting episodes from the Japanese classic “The Tale of Genji” as they are for moonlit landscapes, sprawling street scenes, and abstract designs.

Though in Japanese they are called byobu, which translates as “protection from the wind,” they are mostly used to divide and decorate indoor spaces. They marry form and function, art and architecture.

Byobu typically consist of paper stretched over wood-lattice panels. The paper hinges allow each panel to fold 360 degrees, which can give the overall screen a sculptural presence depending on how it is placed in a room.

“From the very first appearance of pairs of six-panel screens in the sixteenth century Japanese artists have shown tremendous creativity in exploiting this very large format in many different ways, and in using its horizontality and its central division to powerful compositional effect,” wrote Erik Thomsen, a New York-based dealer of Japanese art.

While the most compact screens consist of two panels used for tea ceremonies, the widest can go on for tens of feet, visually expanding spaces with imaginative depictions. These are more often used as backdrops for dances and religious rituals.

Like many quintessentially Japanese art forms, folding screens were borrowed from China and adapted over the centuries to suit Japanese sensibilities.

Screens are also made of wooden and lacquer, but the most versatile and well known are of painted paper. Mineral paints were traditionally used, sometimes over gold leaf, which makes the picture look as if it were lit from behind.

“The earliest screens were intended for display in the big, dark halls of defensive castles (which were just beginning to be built in Japan) and this encouraged artists to make maximum use of bright, glittering materials like gold leaf and brilliant mineral pigments,” Thomsen wrote.

As Japanese artists continue to evolve and reinterpret classic art forms for modern times, screens continue to be a favorite.

“During the last century many Western artists and designers were inspired by Japanese screens; for example, lacquered folding screens were an essential component of the fashionable art deco interior in the 1920s and 1930s,” Thomsen wrote.

“A good example of contemporary Japanese adaptation of the screen format is Morita Shiryu who specializes in dramatic calligraphy screens, often of four panels instead of the traditional six, with a single huge gold character on a black background.”