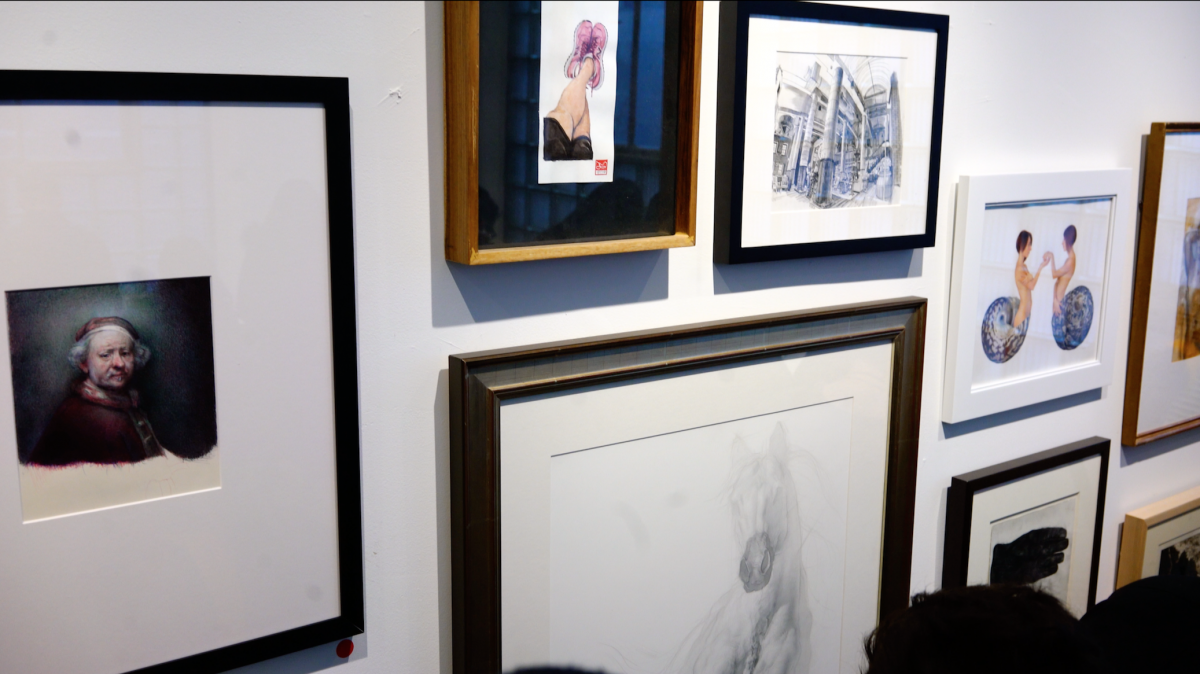 Finished pieces by the artists in the "Sketchbook Vol. 1" exhibition in the gallery of Sugarlift in Long Island City, Queens, New York on January 19, 2019. (Paul-Emile Cendron/Sugarlift)
Arts & Tradition

An Interview With the Founder of Sugarlift, an Innovative Art Consultancy

Recently, a behind-the-scenes look at artists’ lives was put on display in “Sketchbook Vol. 1,” the first exhibition held in the new project space and gallery of Sugarlift, an art consultancy company in Long Island City. Before the opening of “Sketchbook Vol. 1,” Sugarlift also created a giant sketchbook that it took to Union Square in New York and invited people to participate in a sketching competition with some of the artists in the show.

These are just a couple of examples of how Sugarlift is increasing its visibility, connecting emerging collectors with artists, nourishing a community of artists, and connecting this community with the general public.

The Epoch Times had a chance to talk to Wright Harvey, the founder of Sugarlist, on Jan. 28, 2019.

The Epoch Times:  How is Sugarlift different from a regular art gallery?
Wright Harvey: We have experimented with different models in person, online, experiential, art focused, client focused.

[Those models have taken different forms, whether it was in Sugarlift’s former gallery in Bushwick, Brooklyn, or their new space in Long Island City, or at art fairs, or impromptu pop-up events, or their new, augmented, reality application designed to help clients visualize a potential work of art in their own spaces.]

But the idea of Sugarlift has never changed, and that is to cultivate new collectors outside of the traditional collector market, and to allow more artists to be full-time and have sustainable careers.

Technology has changed pretty much any business model across the board. The art market is still sort of clinging to the upper end of the market—auction houses and brick-and-mortar galleries. But at the same time, technology is really changing our market substantially.

The Epoch Times: What are some of those changes?
Mr. Harvey: As the art market goes online, artists can now communicate directly with their audience. Whereas in the past, the gallery, the dealer, or the auction house was doing the branding, the marketing, and making the sales for the artists. Now we have, for example, Nicholas Sanchez, who has a quarter of a million Instagram followers he communicates with daily. It changes the role of the galleries and at the same time opens up potential new people entering the market as collectors.

You can think of the accessibility of artists [for the gallerists and collectors] as a big cliché that everyone’s trying to figure out. But if you look at the bigger arc, from the time art was being collected and commissioned by the church, by kings, pharaohs, and royalty, to wealthy merchants and barons in the 19th century, and then pre-2000, the only art collectors were people with old money. And since 2000, because of technology opening up the market, we have a mass affluent audience who are interested in art but are not quite connoisseurs. The art market hasn’t really built a service model around these new collectors.

The Epoch Times: Aren’t they going to the galleries?
Mr. Harvey: Most galleries have a small handful of collectors that drive their entire bottom line, and that’s why it feels so exclusive, and we’re trying to say, let’s change the entire model. Let’s open up art to a much wider audience. Art is still a luxury good, but there are arguably millions of people who are interested in collecting a painting who don’t have access to it or at least don’t know where to start. And there are thousands of artists creating art. They don’t have access to the collector, so that’s what we’re bridging.

The number of galleries that are closing is actually accelerating every year, partially because of rent increasing. Galleries are saying, OK, maybe now we need to go to art fairs or sell things on Instagram, but they’re sort of trying to grasp what the next model is.

The Epoch Times:  Where does that leave the role of the tastemaker and connoisseur? Is that the role of Sugarlift?
Mr. Harvey: That’s not necessarily true. A traditional gallery might work with only 10 artists, where they’re trying to develop the myths and brands behind these artists to really increase their financial value and create a sort of speculative value around those artists.

I believe that a new art collector, even if they have yet to buy their first piece, knows what they want to collect. They know what they react to, connect to, emotionally. It’s our job to understand that for a new collector, there might be certain pitfalls that they need to avoid, such as not paying the right price for a piece, not understanding the medium of a piece, not understanding that some work might be more derivative or kind of kitsch. We help them determine the difference between a bad artist and a good artist who’s creating interesting and strong work. So to combine those ideas, it’s our job to keep the collector in the driver’s seat as the tastemaker, but to only present them with good options.

The Epoch Times: So you’re empowering the collector, and empowering the artist by connecting them?
Mr. Harvey: We’re trying to basically reduce the barriers between the artist and the collector, and part of that is the discovery of the artists and the artwork, but it’s also envisioning how that art would fit in the lives of the collectors, but using technology to look at a lot of options to visualize it in their space. For example, we have an augmented reality application that clients can use to envision what a particular work of art would look like in their homes.

Also, our business has a really strong, client service and logistics aspect. So when clients find something they love, we make it really easy on the artists and the collectors to bring that art into their lives.

The Epoch Times: You also have a very wide variety of artists in terms of their style and approach. How do you find and select the artists?
Mr. Harvey: The main thing I look for is—in whichever medium the artist is working—a mastery of that medium or technique. So for example, Dina Brodsky’s work, whether you’re looking at her ballpoint pen drawings or her miniature paintings, she really stands out from a technical standpoint. Or if we’re working with a photographer, we evaluate them in terms of their skill level relative to the population of other photographers out there. So we’re really looking for artists who know their medium inside and out. Sometimes, it means they have had classical training, sometimes it means they have put in the time, but they do set themselves apart.

The second thing we look for is, do the artists have a strong understanding of how their work relates to other artists and also to art history? And do they understand that what they’re creating has to relate to everything else that came before it and around it. Art is always responding to what else has been created, and I think with that strong understanding, you can make better work.

We’re not trying to work with every single artist in the world. We’re really trying to cultivate a community of artists who we think are making new and interesting work. We work with artists who we think are good people, that we want to be a part of that community. That means, they want to be full-time artists. They work hard, they’re honest, and they treat the other artists that we work with respect, and that by bringing them into the community, it makes everyone better. It makes everyone stronger.

The Epoch Times: What inspired you to establish Sugarlift?
Mr. Harvey: Wanting to spend more of my professional life doing something that I genuinely care about and where I could make a difference. And working in the visual arts is very energizing for me. I knew that I cared enough and that I would have the stamina to do something impactful.

We want to create more sustainable careers for artists so that in the long run, they can continue to evolve their practice over many years, like many of the great artists before us. Those masters had a whole lifetime to continue to evolve and progress, and those are the artists that we celebrate as culturally significant to us as human beings and whose works hang in institutions.