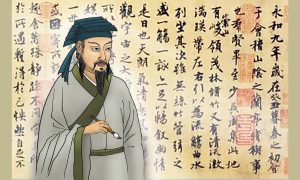 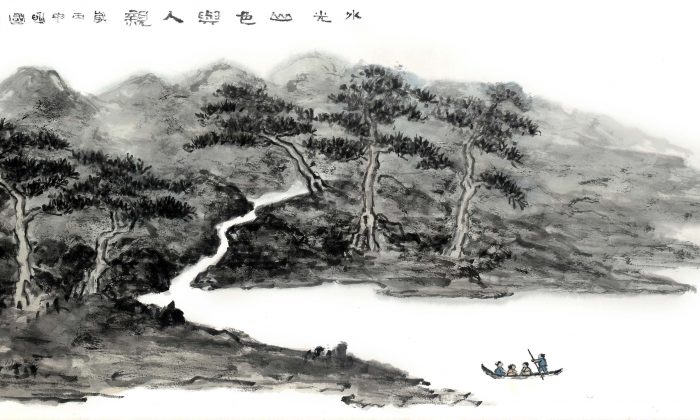 Lu Yu said to the boatman, "If you get everybody out of the water, I'll reward you with 20 Taels.' (Sun Mingguo / The Epoch Times)
Chinese Culture

An Honest Deed That Led to a Reunion

There were three brothers, Lu Yu, Lu Bao, and Lu Zhen, who lived outside the east gate in Changzhou, Jiangsu Province, during the Ming Dynasty. Lu Yu had a son named Xi’er. One day when Xi’er was 6 years old, he went with the children from next door to a temple fair and never returned.

Lu Yu and his wife, Wang, looked for their child for days, but there was no sign of him anywhere.

Distraught, Lu Yu decided to leave home to do business and look for Xi’er at the same time. A few years went by. One day, he came to a place called Chenliu and found a green cloth bag in a latrine. He opened the bag and was astonished to find 200 taels of silver in it.

Lu Yu thought: “Whoever lost the money must be desperately looking for it. A life might be at stake. Honesty is a virtue. I’ll wait here for the owner to come back for his money.”

A day passed, and nobody showed up. Lu Yu had no choice but to continue his journey. He met a businessman named Chen Chaofeng at an inn in Suzhou, Anhui Province. They talked about business, and Chen sighed and said he had lost a bag in Chenliu with 200 taels of silver in it.

Lu Yu asked him to describe the bag. The description matched the bag he had found. He promptly took out the bag to return to Chen.

Chen was delighted. He offered to split the money down the middle with Lu Yu as a reward, but the latter declined.

In gratitude, Chen invited Lu Yu to his residence. He was keen to give his daughter’s hand in marriage to Lu Yu’s son if he had one. Lu Yu cried and told him about his son who had gotten lost.

Chen sighed and said: “I have a boy here whom I bought from another man for three taels of silver some years back. He’s 13 now. You can take him to be your son. It’s my way of repaying your kindness.”

The boy said: “I’m not sure. I only remember my father is called Big Lu. I also have two uncles. I was duped and taken away before I was sold here.”

Lu Yu cried: “I’m your father! It has been so many years. Never in my dreams did I think I would run into you here!”

Chen and his family rejoiced at the Lus’ reunion. With sincere gratitude, Lu Yu said to Chen, “I owe it to you that I could be reunited with my son.”

Chen replied, “You did yourself a big favor by returning my money to me.”

The two families’ children were betrothed to each other. Chen gave the father and son 20 taels for them to go home.

The following morning, Lu and his son bade farewell to the Chens and came to a river. There was a commotion. A boat had capsized, and there were a few people in the water crying for help. Onlookers were arguing with some boatmen at the bank, who demanded to be paid for getting the people out of the water.

Lu Yu was eager to save the people. The 20 taels came to his mind. “I could offer them to the boatmen as a reward,” he thought.

He said to the boatmen, “If you get everybody out of the water, I’ll reward you with 20 taels.”

In no time, everybody was rescued.

Lu Yu gave the 20 taels to the boatmen. The people from the capsized boat were coming up to Lu Yu to thank him when someone shouted from among them, “Where did you come from, Brother?” It was Lu Yu’s youngest brother, Lu Zhen.

“Heaven helped me save my brother!” Lu Yu exclaimed. He told his brother about the 200 taels, the 20 taels, and his reunion with his son.

Lu Yu asked Lu Zhen why he had come to Suzhou. Lu Zhen replied: “It has been a few years since you left home. We were told that you had died in Shanxi. Your wife is already in mourning, and yet Lu Bao is trying to force her to remarry. She refused, of course. Go home quickly to your wife, before it’s too late.”

Lu Yu panicked. He jumped onto the boat and headed home.

The middle brother, Lu Bao, was wicked. When he heard that a widower in Jiangxi was looking for a wife, he offered Lu Yu’s wife to him. The two men agreed on a price of 30 taels.

Lu Bao got the money and told the man: “My sister-in-law is stubborn. I’m certain she will not leave with you. Come to my house in the evening with a sedan chair. The one wearing a white hairband in mourning will be my sister-in-law. Just grab her, put her in the sedan chair, take the boat the same night, and go.”

Lu Bao’s wife, Yang, told Wang: “My husband has married you off to a Jiangxi man. He’ll come in the evening for you. You had better start packing your things.”

Wang cried and turned the idea down flat. “My husband may be dead, but I’ve yet to see his body. Let’s wait till Lu Zhen comes back with news of Lu Yu before we do anything. Please do not force me! And how can I marry anyone when I’m still in mourning?”

Yang looked for a black hairband for Wang, but it was Heaven’s will that she could not find one. So she exchanged hers with Wang.

Dusk fell, and the Jiangxi man came to the Lus’ house with a bridal sedan. When the door was opened, a band of people headed straight for the woman wearing a white hairband.

Yang cried out, “I’m not the one!” But the band just grabbed her, stuffed her into the sedan, and sped off.

The following morning, Lu Bao came home and could not find his wife. When he saw his sister-in-law wearing a black hairband, he got suspicious and asked Wang what had happened. Wang told him about the switched hairbands.

Lu Bao pounded his chest. At the end of the day, it was his own wife he sold.

Lu Bao was about to leave when five people came in. They were none other than his brothers Lu Yu and Lu Zhen, his nephew Xi’er, and porters bringing in their luggage and goods. Ashamed of himself, Lu Bao ran out the back door.

Lu Yu said: “Had I not returned the 200 taels of silver, I wouldn’t have found my son. And had I kept the 20 taels, I wouldn’t have run into my brother and found out what had happened in the family. It is Heaven’s will that we are reunited. Lu Bao got a taste of his own medicine for trying to sell my wife.”

Lu Yu became even kinder to others. His family prospered. Xi’er married Chen Chaofeng’s daughter and had many descendants.

The tale of Lu Yu’s encounter is an excellent example of integrity and kindness.