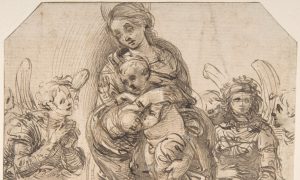 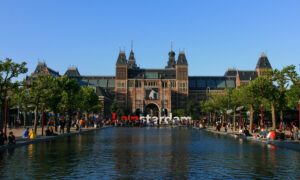 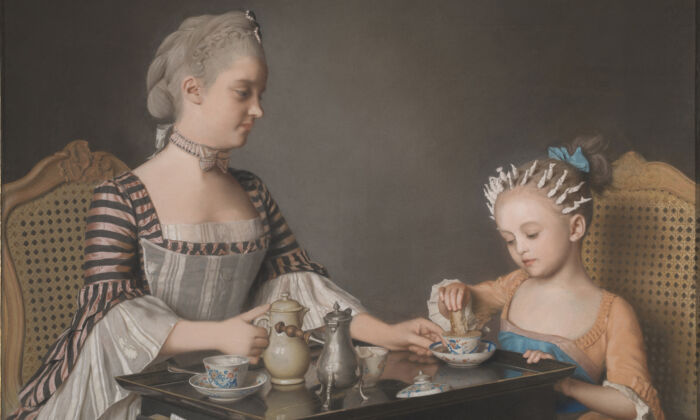 "The Lavergne Family Breakfast," 1754, by Jean-Étienne Liotard. Pastel on paper stuck down on canvas; 31 1/2 inches by 41 3/4 inches. From the estate of George Pinto under the acceptance in Lieu scheme. (The National Gallery, London)
Fine Arts & Craftsmanship

At first glance, everything in the pastel painting “The Lavergne Family Breakfast” seems rather ordinary: A mother and daughter sit at a table eating breakfast. Similar scenes could play out in homes across the country. But look closely and you’ll see that 18th-century Swiss artist Jean-Etienne Liotard has conveyed the resplendent nuances of human nature.

Lauded as Liotard’s masterpiece, “The Lavergne Family Breakfast” was acquired in May by London’s National Gallery. (It had been on loan to the gallery since October 2018, the first time it was shown in public.) The pastel painting has been in Britain since 1755 when it was bought by Liotard’s most important patron, Viscount Duncannon.

In the painting, an elegant lady dressed in fine silk attentively tends to her daughter. With perfect posture and poise, the mother patiently steadies the teacup and saucer with her left hand as her daughter dips a biscuit into the hot milky drink. This tender mother-daughter moment appears calm and still, yet the painting is full of tiny movements.

Every mother can relate to the scene as the mother in the painting simultaneously juggles many tasks. While steadying the teacup with her left hand, she holds a jug in her right hand as if she’s just poured her daughter’s drink. Her daughter, being so eager to eat, has dipped her biscuit in at once. A tiny spill can be seen to the left of the saucer.

The little girl, whose head is almost crowned by the paper curlers she’s slept in, holds onto the table with her left hand as if to resist her natural impulse to hold the teacup herself, which no doubt her mother has told her is too hot for her to handle.

Liotard’s attention to these minutest of details elevates the scene from the ordinary to the extraordinary, with each detail making the picture relatable to us even now, nearly 250 years later.

Liotard worked in the golden age of pastel painting, according to Christie’s website. Although pastel had been around since the Renaissance, it wasn’t until the 18th century, initially in France, that the medium became popular.

Pastels use the same pigments as oil paints but are mixed with a binder and made into sticks. They appealed to the growing middle-class clientele as a cheaper alternative to oil paints. Plus, the immediacy of pastels allowed the artist to capture fleeting expressions almost as quickly as they happened, as opposed to waiting for a layer of oil paints to slowly dry.

The powdery nature of pastels made the paintings fragile, yet the refraction of light on the powder created the most luminous pictures. Pastel paintings have kept their color saturation more often than oil paintings, since pastel paintings cannot be varnished, which often discolors or damages the oil paint.

Liotard (1702–1789) first trained as a miniaturist in Geneva and then as a portraitist in Paris. In his lifetime, he was a pastellist known across Europe for creating intimate and illuminating paintings. (He also created in oil, chalk, and enamel.) His often candid paintings were highly regarded in the courts of London, Vienna, Paris, and The Hague, and he commanded high prices for his commissions.

Nowadays, few likely know of Liotard; most of his oeuvre was made for private households and kept behind closed doors in family collections to be treasured for generations. It’s this aspect of Liotard’s art that is most fascinating. He put his sitter’s very nature onto paper. Whereas portraits destined for the public realm often showed the sitter’s standing in the world—a public persona that would be idealized—Liotard’s paintings were different; he showed his sitters in private moments and noticed every little thing about them and their surroundings.

For instance, in “The Lavergne Family Breakfast,” Liotard rendered the mother with dark circles under her eyes, perhaps a sign that she’d been woken early by her little girl. And he breathtakingly depicted so many different materials, such as the delicate Chinese porcelain reflecting on the lacquer tray, and a silver coffee pot and pottery jug that both reflect the windows on their surfaces.

“The Lavergne Family Breakfast” reflects just one aspect of Liotard’s artistry. His output was prolific and not limited to painting. He even wrote a treatise on painting. And his interests varied: He was a collector, dealer, and traveler. Liotard’s work deserves the high level of attention he gave to his marvelous works.

To find out more about Jean-Etienne Liotard’s “The Lavergne Family Breakfast,” visit NationalGallery.org.uk