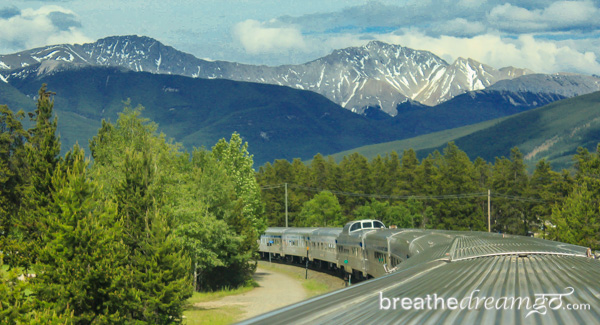 The Canadian: The Best Way to See Canada That I Know

ABOUT AN HOUR outside of Jasper, as I was settling into my private cabin on the train, a moose appeared outside my window, as if stationed there on purpose by the Via Rail company. There he stood in all his lumpy majesty alone, a dark figure silhouetted against a golden field. In the distance, the tips of the Rocky Mountains were lit up by the last rays of the sun. It was the most Canadian of moments and I froze in a kind of northern induced rapture. A second or two later and we had moved on, inexorably pushing forward across the Canadian landscape.

The Canadian has been serving up moments like these since April 25, 1955, when the Canadian Pacific railway inaugurated its new stainless steel, scenic-domed transcontinental passenger trains to traverse the 4,446 kilometres between Vancouver and Toronto.

An American train aficionado I met on The Canadian, Tom from New Jersey, told me it’s his favourite train in Canada, and one of the two best in North America in terms of food, amenities and the epic-ness of the journey. Tom was travelling aboard The Canadian for the third time this year. He has forgotten how many times he’s taken it in total, but he remembers the first time: 1957.

I could well understand Tom’s enthusiasm. I boarded The Canadian in Vancouver for the first time, to begin the four-day journey to Toronto, at the end of June — a wonderful time to see the country at the height of summer’s early fecundity. I was filled with anticipation, imagining myself relaxing alone in my private room, with Canada’s rugged natural beauty speeding by, rousing myself only when the porter chimed, “Second seating is now being served in the dining car, second seating!”

And yes, this did happen several times over the course of four days on the train. And yes, it was wonderful.

The Canadian Crosses Time and Space

I felt I was not only transported across the breadth of Canada, but also back in time, to a more relaxed pace of life.

If the train survives the 20th century, it will own the 21st.

The Canadian starts from Vancouver two or three times per week, depending on the season, at about dinner time. We pulled out as the sun was just beginning to start a long descent over the big Canadian sky. There was a sense of palpable excitement among the passengers. For many, including myself, this journey was a dream trip, a trip-of-a-lifetime.

A Big Trip Across a Big Country

Via Rail, the company that’s been running The Canadian since the 1970s, is well aware that this is a big trip, across a big country. They support the excitement and anticipation in so many ways, from announcements about passing landmarks through on-board activities and superb menu options.

We ate our first meal in the dining car that evening as we left Vancouver. I had halibut, cooked to order without breading, vegetables, salad, a gluten-free chocolate mousse dessert and peppermint tea. I was seated with jovial Emma from Britain, a lawyer turned exuberant tourist. We talked for a long time, over several cups of tea, about many things, some surprisingly candid. Travel talk is like that, it throws strangers together for brief intimate moments.

In the meantime, the attendant had lowered the bed in my room, tucking away the chairs underneath, and leaving me a shower kit with soap and towels and a single chocolate on the turned-down bed. I retired to my private room, nothing else to do but crawl into bed and read, everything I needed within arm’s length distance. I slept very soundly in a surprisingly comfortable bed, rocked to sleep by the motion of the train.

The train is a relaxed way to see the breadth of the Canadian geographic experience.

I expected the diverse scenery we passed to be a highlight of the journey. But what I didn’t expect is that the culture inside the train is even more absorbing than the passing scenery.