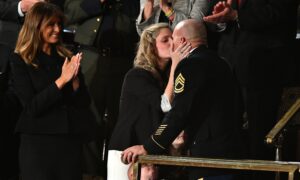 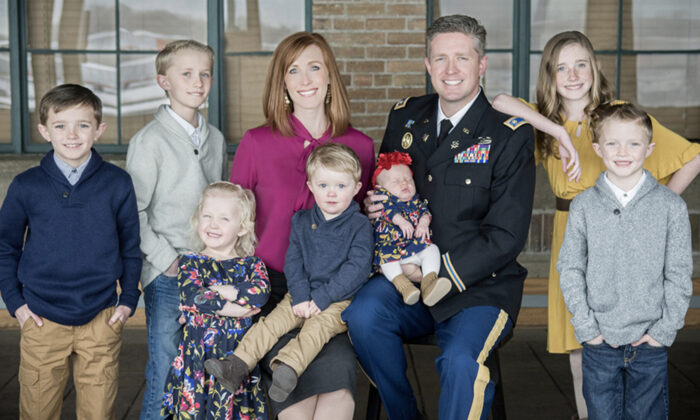 Army Maj. Brent Taylor knew the only way to train Afghan forces to take over their own security was by forming real relationships with them. Tragically, in November 2018, he was killed by one of the men he was training who had been radicalized. Maj. Taylor was just 39 years old.

“His great leadership capacity–his commitment and love for these people—is really what cost him his life,” his widow, Jennie Taylor, said.

Taylor remembers her husband as old-fashioned, traditional, driven, and respectful. She joked that he would have been happy to have been born in colonial times. He was also fun-loving and had a wonderful sense of humor. She remembered how he and his fellow soldiers sang “12 Days of Christmas” with a “Lord of the Rings” spin on his first deployment.

“He had a sense of duty that drove him in everything he did, but he also really knew how to have fun in life,” Taylor said.

Taylor said God inspired her husband’s service as mayor and city councilman in their hometown of North Ogden, Utah. He always valued people and empowered them to be their best. It was his patriotism and sense of duty that led him into the Army.

“He always from a young age had a sense [that] he was part of something bigger than himself,” Taylor said.

Furthermore, he saw his family as a gift and responsibility from God. He would come up with his own creative tales for bedtime stories with the underlying principles he wanted to teach their children. He taught his kids the value of work by planting crops and raising chickens on a small farm they owned.

“He was very deliberate. Day-to-day things had meaning,” Taylor said.

Faith in God was what allowed Taylor and her seven children to cope with his death.

“God can make reason of all things that happen,” she said. “I think when it happened, God was saying: ‘Have faith in me and I’ll help you make sense of this. I’ll help you still find beautiful happiness in life.’

“I really believe even though my husband’s body is dead—this is not the end of his life.”

Taylor learned how to be humble and ask for other people’s help when she needed it most. She also discovered the good that people can do when the unimaginable happens.

Maj. Taylor had been a student at the University of Utah and Brigham Young University, and when he was killed, his professors agreed to grant him his doctoral degree posthumously. During these discussions among his professors, someone suggested forming a scholarship in his name.

Instead of dwelling on her husband’s death, Taylor began by hosting a fundraiser on what would have been her husband’s 40th birthday on July 5, 2019.

“I didn’t want to just spend his birthday crying,” Taylor said. She invited friends and community members to thank them for their support during Maj. Taylor’s deployments and after his death.

Ultimately, she founded the Major Brent Taylor Foundation as a vehicle for donations to the scholarship fund for both universities. The organization’s mission is to train future leaders, honor military members and their families, and engage with the community.

To date, the foundation has raised funds for two undergraduate and two graduate scholarships. Taylor helps honor service members and veterans by assisting their families and telling the stories of military service members on social media. Before his death, Maj. Taylor was able to help engage the community through concerts in the park and fundraising for a local amphitheater. Now, every Veterans Day, the foundation holds a blood drive in his honor.

“Brent really believed that the way to strengthen a community was to bring people together. He would talk a lot about how we have far more that unites us than divides us,” Taylor said. “We just need to remember that.”

Taylor also had become involved with an organization called Follow the Flag when community members asked to borrow its gigantic Fourth of July flag to honor Maj. Taylor, who had been mayor of North Ogden at the time of his death.

That ignited a patriotic movement in town and led to the purchase of another large flag called “The Major” to honor him. Every Veterans Day, it hangs in a canyon close to their home. It was after this series that Taylor embarked on a journey to honor our nation’s service members and first responders.

Taylor has helped families grieve, comforted them, and has assisted with the funeral arrangements for other military members who have been killed in action, such as pilot Kenneth Allen, from North Ogden, who was killed in a helicopter crash in Afghanistan in December 2019, as well as for local police officer Nate Lyday, who was killed in the line of duty.

“There’s something about the bond you create with someone when you help them through their own tragedy,” Taylor said.

In addition to Taylor’s efforts to help these heroes’ families, she recently supplied the National Guard in Salt Lake City with food and water during the riots that marred the peaceful protests over the police killing of George Floyd.

Two days later, Taylor and others visited with more refreshments and expressed their gratitude for their service.

Taylor is currently fundraising for a Gold Star Memorial in North Ogden. The national movement honors not only the fallen, but also their families.

The monument is designed without a single name on it, but instead features a cutout silhouette of a service member. Taylor wanted to offer a gift to her community that would ensure that the price of freedom is never forgotten. The plan is to place the monument between North Ogden’s city hall and the community library.

“I feel like North Ogden is a Gold Star community,” Taylor said.