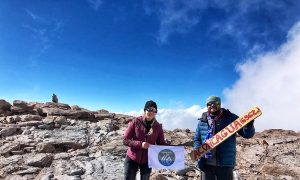 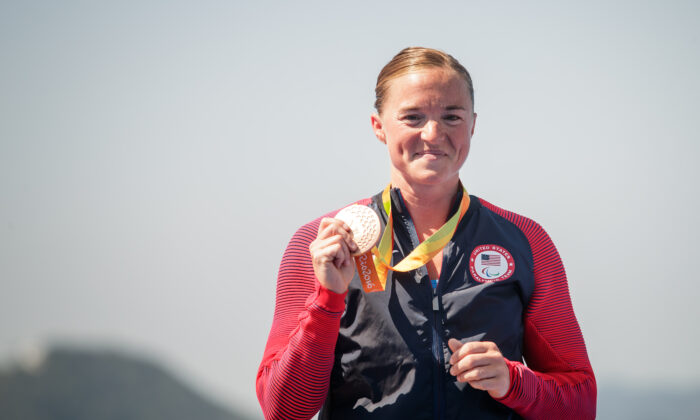 An Army Veteran Becomes a Paralympian and Empowers Others

For Melissa Stockwell, 39, joining the military had always been a lifelong aspiration.

“I knew as a child that I wanted to join the military. I love our country, and I wanted to give back,” Stockwell said. While in college, she participated in ROTC and was commissioned as a second lieutenant in the U.S. Army.

But in March 2004, during a routine patrol with her unit in Iraq, a roadside bomb exploded next to her vehicle.

Stockwell was conscious, and a combat medic applied a tourniquet to her leg. Rushed to the Baghdad emergency room, she underwent a life-saving surgery.

When she woke up, she learned that she had lost her left leg above the knee. She was the first female soldier to lose a limb in U.S. history.

“I remember even very early on just knowing that it was going to be OK. I knew I had a great family. I had a great support system,” Stockwell explained. “I was happy it was me and not another one of my soldiers because I knew I would be able to adapt and overcome.”

As a result of her bravery and service, Stockwell was awarded the Purple Heart and the Bronze Star.

While recovering at Walter Reed Army Medical Center, she realized there were other soldiers in much worse condition. Some were missing multiple limbs, some had lost their eyesight, and some had suffered traumatic brain injuries.

“[I] thought of myself pretty early on as one of the lucky ones because I had only lost one leg,” Stockwell recalled.

Stockwell wasn’t about to let the loss of her leg stop her from what she wanted to do in the future. Her biggest challenge was waiting for her body to heal so she could receive a prosthetic leg. Fifty-two days after she had lost her limb, she stood up on her prosthetic leg.

“It was an amazing day. Just kind of the realization that life would go on. I would be independent. I would walk again. It was a great day,” Stockwell remembered.

Stockwell had grown up as a competitive athlete, and as she recovered in her hospital room she knew she wanted to be an athlete again. There was a pool at Walter Reed, and Stockwell relished how swimming and the water made her feel.

As she began swimming more regularly, she learned about the 2008 Paralympic games, which would be held in Beijing. She figured that if she dedicated herself to her training, she could qualify for the games—”the world’s biggest athletic stage,” as she said.

That’s when she began training full time. At first, her times were slow, but she became faster and faster. As a result of her diligent work, she qualified for the 2008 games.

Her first experience at the 2008 Paralympics allowed her to wear a U.S. uniform and represent her country once again.

While she competed as hard as she could, she didn’t make the finals.

“I was pretty upset that I came all the way to the Paralympic Games and ended up with a participation medal and nothing more,” Stockwell explained.

However, at the end of the games, Stockwell’s team nominated her to carry the U.S. flag during the closing ceremony.

“Looking back I think that that was the meaning of that Paralympics, to kind of let myself know that the journey is sometimes more important than the destination or any medal that you might get,” Stockwell said.

Stockwell continued to challenge herself, making the switch from swimming to triathlon. She enjoyed the additional challenge of all three sports—swimming, cycling, and running—and excelled, winning three consecutive triathlon world titles in 2010, 2011, and 2012.

In 2016, Stockwell was on the inaugural triathlon team for the Paralympic Games in Rio de Janeiro. Again, she savored the fact that she could wear a U.S. uniform and represent her country.

After fierce competition, Stockwell won her first Paralympic bronze medal. Not only that, but the U.S. team had swept the competition–fellow Americans Hailey Danz and Allysa Seely won the silver and gold, respectively.

“It was September 11th, and standing on the podium with my two teammates in a USA sweep, I mean it doesn’t really get much better than that,” Stockwell said.

Stockwell had always known the importance of athletics, especially for people with disabilities.

In 2011, she co-founded a Paratriathlon club called Dare2tri for young people, adults, and injured veterans. At first, the organization’s goal was to help get a few athletes with disabilities to compete in triathlons. As it turned out, dozens participated in the first year.

Dare2tri provides training, adaptive equipment, and financial assistance for its athletes. The organization relies on sponsors like Toyota to help them help get disabled athletes into the sport.

The organization’s impact on its participants has been massive—whether it’s a young athlete who has been bullied at school for their disability or a veteran who has suffered a life-changing injury.

“They do the triathlon and they cross the finish line, and you see the self-confidence and the self-worth—not just in them but in their family as well,” Stockwell said.

Looking Ahead to Tokyo 2020

Stockwell is currently training for the 2020 Paralympic Games in Tokyo. She is taking her training day by day, and is hopeful that she will qualify for the games and be able to represent the United States once again.

“I don’t think it would ever get old to be able to put that uniform on, on the world’s biggest athletic stage, and really just show the world what I’m capable of,” Stockwell said.