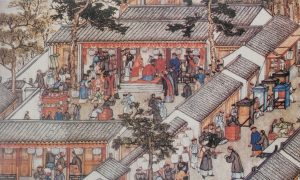 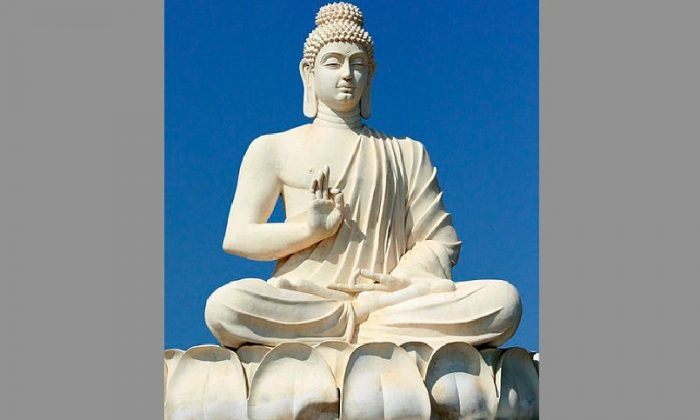 Buddha Shakyamuni's statue near the Belum Caves in Andhra Pradesh, India. The Buddha was a prince by birth but decided to abandon his royal title and pursue spiritual growth after witnessing the sufferings of human life. (Purshi/ Wikimedia Commons)
Chinese Culture

An Ancient Chinese Story: A Treasure Created From Painful Carving

Long ago, in a city in China, the residents built a large, traditional-style temple. The temple was solemn and tranquil, but it lacked a Buddha statue for believers to worship. So the people invited a renowned sculptor to carve a Buddha statue so that they could express their reverence.

The sculptor was moved by their sincere piety and personally went to a mountain to seek out a stone suitable for the sculpture. After much effort, he finally found a stone of great quality. It was huge, so he split it into two pieces. He selected one piece, picked up his chisel, and started carving.

“Ouch, it really hurts! Can you be a bit gentler?” complained the stone upon feeling the first incisions.

Barely able to bear the pain, the stone asked the sculptor, “I have endured harsh mountain winds and rainstorms season after season, but I have never experienced this kind of pain before. Will your carving really transform me into a Buddha statue?”

“Forbearance itself is a process,” the sculptor replied. “As long as you are determined to endure the pain, you will be born again when I finish. The pain will end then. If you have faith in me, please try to endure the pain.”

The stone considered the sculptor’s words for a long time. “I believe you, but when do you think you will finish?” it asked.

The stone was silent. Fantasizing about being worshiped by thousands of people made it feel happy and complacent. But as the sculptor worked, the stone found it hard to endure the intense pain of being chiseled.

Four hours later, the stone cried out: “I’m dying from the pain! It’s killing me! Don’t use your chisel on me anymore. I really can’t take this anymore.”

Hearing this, the sculptor stopped his carving. He split the stone into four pieces of slab stone instead. The slabs were used to pave the walkway in front of the temple.

‘I Won’t Give Up So Easily’

The sculptor then began to carve the other piece of stone. After carving it with a sharp knife and striking it with an ax, out of curiosity, the sculptor asked the stone, “Don’t you feel intense pain?”

“The first stone and I were originally one piece, so I feel just as much pain as it felt,” the second stone said. “However, I won’t give up so easily.”

“Why aren’t you asking me to be gentler?” wondered the sculptor.

The stone answered: “If I ask you to use less force, then the Buddha statue won’t be detailed and exquisite enough. People would then ask you to work on it some more. It’s better if you are able to completely finish in one shot so we won’t waste other people’s time.”

The sculptor listened quietly and admired the tenacity of this second piece of stone. After 30 days of chiseling, the stone became an exquisite Buddha statue.

Not long after, the stately and dignified Buddha statue was placed on a sacred altar. Being both impressive and solemn, it was greeted respectfully by people far and wide. People everywhere revered it. Every day, more and more people came to worship and burn incense for the Buddha statue.

One day, the first stone, now pavement slab, asked the statue: “Why do you get to stand high above me and be worshiped by all, while I get trampled by the feet of thousands on their way to worshiping you?”

The second stone kindly smiled and replied: “It’s simple. You didn’t have to endure much to become pavement. Meanwhile, I endured the hardship of countless painful blows, chisels, and cuts to become a Buddha statue.”

Whether a person can endure hardship or chooses to seek comfort stems from just one crucial thought. Passing up a predestined opportunity might result in endless misery. Yet if one is willing to endure test after test and stay steadfast, what awaits him will be a splendid and bright future.