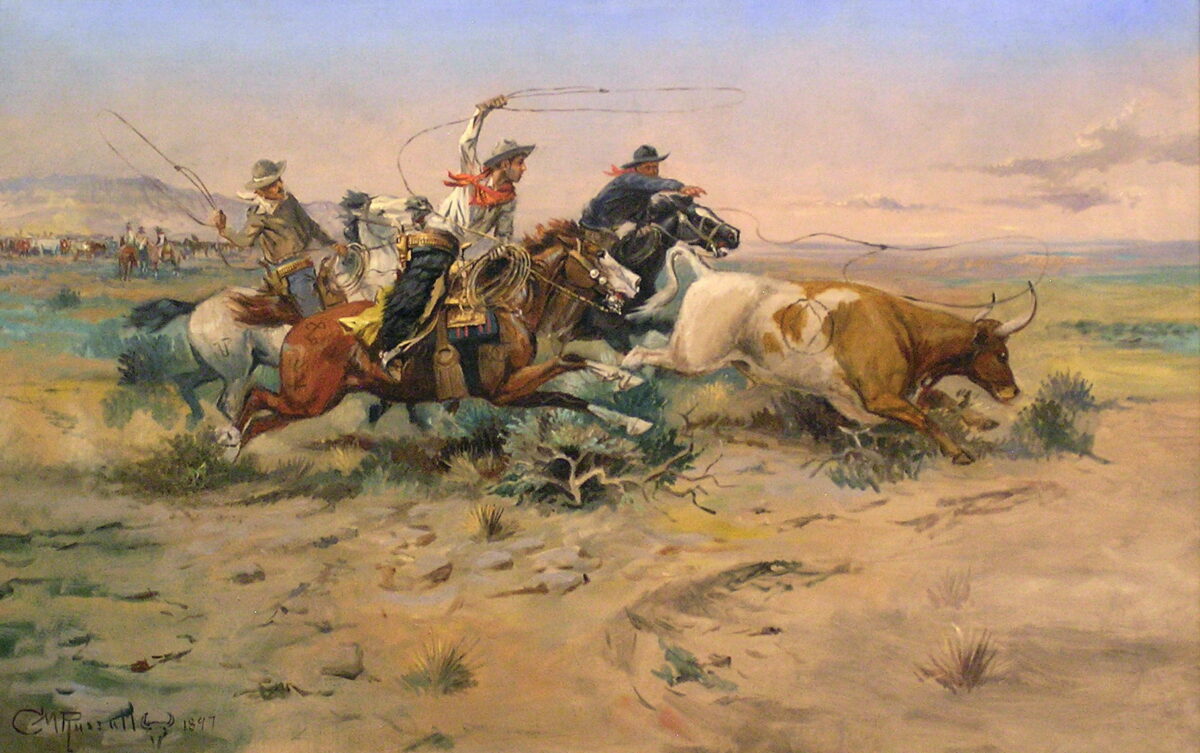 An American West Story: How A Cattle Drive During the 1860s Exemplified Bravery and Loyalty

Charles Goodnight lived for eighty-three years, from 1836 until 1929, and in that time was a settler, a scout, a Texas Ranger, a cattleman, an entrepreneur, a town father, and even an early booster of the fledgling film industry in Hollywood, California. However, it would be the blazing of the Goodnight-Loving Trail in 1866 and the events which followed it that ultimately earned Goodnight a place in the saga of the 19th-century American West. Put simply, Goodnight embodied the best qualities and values that contributed to the building of the United States as a nation: bravery, ambition, and devotion to one’s friends.

Born in Illinois on March 6, 1836, Goodnight migrated to Texas in 1845 with his family at age 9. Goodnight came of age on the Texas frontier, discovering a love for the outdoors and trail craft which would aid him in his varying professional careers. In the 1850s, the Comanche Nation was in the process of defending their ancestral lands from Euro-Americans, and Goodnight aided his fellow Texans in the defense of their lives and property from Comanche raiders.

During the Civil War, Goodnight chose not to fight for either the Union or the Confederacy, and instead remained in Texas, defending settlements and homesteads from Comanche raids. But many Lone Star landowners traveled east to fight for one side or another, and the Comanches burned these undefended farms and ranches. Many settler families fled Texas entirely, allowing their longhorn cattle to roam wild in the backcountry.

When the conflict concluded in 1865, Goodnight saw an opportunity in all these unclaimed cattle herds. He decided to gather up all these wild longhorns and drive them through West Texas to the army outpost of Fort Sumner, New Mexico.

Partnering with longtime friend and experienced cattleman Oliver Loving, Goodnight began hiring trail hands, most of whom were Civil War veterans and drifters in need of work, including such diverse and disparate personalities as former outlaw and Confederate Army veteran William “One-Armed Bill” Wilson and Bose Ikard, a former slave who would become Goodnight’s most trusted and valued employee.

Despite numerous hardships, Goodnight and Loving’s first cattle drive to Fort Sumner was a success, and they sold the majority of the herd to the army for a whopping $12,000. Loving held onto a few thousand head, having had the idea to drive these cattle north to Colorado gold camps such as Denver and Auraria. For most of the next year, Goodnight and Loving moved cattle through West Texas into New Mexico and Colorado on what came to be known as the Goodnight-Loving Trail.

Goodnight and Loving’s partnership seemed destined to continue indefinitely, until tragedy struck in the late summer of 1867. Oliver Loving and Bill Wilson went ahead of the third cattle drive to meet some prospective buyers in Fort Sumner when they were attacked by a large Comanche war party. Loving and Wilson took refuge underneath an overhang along the banks of the Pecos River, holding off the Comanches as best they could with their Colt pistols and Henry rifles. Loving was severely injured in the right arm and side, and the fight became a standoff. Loving explained to his companion that their only hope was for Wilson, who was uninjured, to make his way back to Goodnight, who was waiting with the cattle herd further east.

Under the cover of nightfall, Wilson crept down the riverbank until he was out of sight from the Comanches, and crossed hundreds of miles of open prairie on foot until he linked back up with Goodnight and the rest of the trail crew. Goodnight rode ahead to see what had become of his trusted friend and business partner. He began tracking Loving northwest, discovering that at some point the Comanches had grown bored with the siege and abandoned the wounded cattleman to his fate. As luck would have it, Goodnight met a group of Mexican traders on their way back across the border, who told Goodnight they had found Loving and taken him to the army hospital in Fort Sumner.

Goodnight continued north and found Loving on his deathbed. Loving had accepted his fate and insisted that Goodnight sell his share of the cattle, taking half for himself and giving the other half to Loving’s family. Loving also insisted that he be buried in his hometown of Weatherford, Texas. Oliver Loving died of gangrene on Sept. 25, 1867. After temporarily burying his partner in the Fort Sumner cemetery, Goodnight drove the rest of his cattle on to the gold camps in Colorado, as per Loving’s request. The following spring, Goodnight personally supervised the exhumation of Loving’s body, and escorted the corpse back to Weatherford, Texas, where Loving was re-buried on March 4, 1868, just two days shy of Goodnight’s 32nd birthday.

Charles Goodnight’s later accomplishments would be many. However, it was his pioneering cattle drives of the late 1860s, as well as his kept promise to a dying friend, that officially proved that Goodnight was a man who truly represented the best qualities and values that the still-developing United States had to offer.