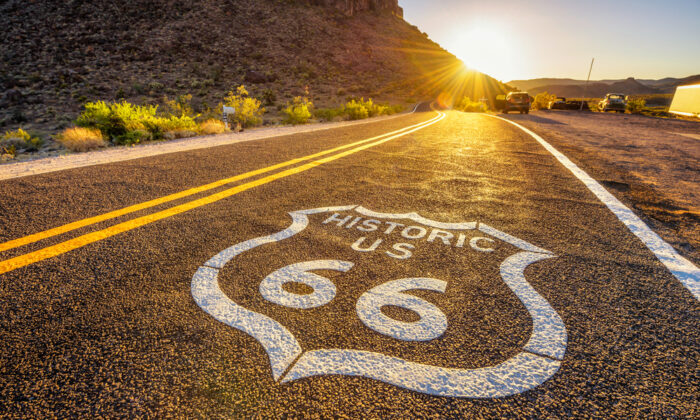 It’s one of America’s most storied drives, and greatest road traditions, traveling from Atlantic to Pacific, between the country’s two largest cities. The journey is celebrated in history, and literature (from “The Grapes of Wrath” to “On the Road”), very much a part of the nation’s fabric. From wagon trains stabbing westward to the days when America got its kicks on Route 66, people have long made their way from coast to coast.

Leaving the grips of New York City, the country opens up. From the multi-lane traffic in New Jersey, into the green heights of the Appalachians, through the broadening skies of the Midwest, the drive takes you down through the desert, all the way to the sea. Those in a hurry can make a Cannonball Run—the unsanctioned, unofficial speed record spanning almost 3,000 miles (celebrated in a 1981 film of the same name)—in just a little more than 25 hours, with a team traveling at an average speed of 110 miles per hour. But really, that’s not the way to do it. Take your time. Five days is ambitious. Even with a week, you’ll still miss a few things. Build in enough days to see everything you can, before you watch the sun sink into the Pacific.

There’s no other place where it’s simpler to drive clear across the continent. While this was once an arduous journey—for the details, dust off your high school history textbook—the nation really started moving with the advent of Route 66, often known as the Mother Road. Operating for a relatively brief period—just a few decades—the route got started in 1926, became a hard-luck icon of the Dustbowl years in the 1930s, and reached its peak in the 1940s and 1950s. At that time, it took the form familiar from movies like the Disney franchise “Cars,” a busy two-lane strip surrounded by drive-in restaurants and motor-court motels and bigger-than-life roadside attractions, everything from a towering T-rex to the Hackberry General Store, to the Leaning Tower of Texas.

But it didn’t last long. Pressed by the imperatives of the Cold War, President Dwight D. Eisenhower passed the Federal Aid Highway Act in 1956, completely transforming America’s transportation system. In place of quirky, character-filled towns straddling a single strip of asphalt, workers built big freeways with soaring overpasses. East-west routes are numbered even, north-south, odd. The lowest numbers for the former begin in the south, with Interstate 10. Much of old Route 66 is traversed by today’s I-40. Start your journey on I-80 in New York City, and head west. Here are some can’t-miss stops along the way.

Celebrated in the 19th-century paintings of George Inness, this is where the Delaware River cuts dramatically along the border with New Jersey and Pennsylvania. It’s a designated National Recreation Area where you can raft, canoe, fish, and rock climb. If you’re ready for an early break, pull off Interstate 80 and take a hike—the Red Dot (Mt. Tammany) Trail gives a great opportunity to stretch your legs, climbing 1,200 feet over 1.2 miles, with the reward of sweeping views at the end.

From I-80, cut south along I-81, into the wonders of Shenandoah National Park. Its crowning glory, Skyline Drive, runs 105 miles, from Front Royal to Rockfish Gap. The road, built in the 1930s in classic Civilian Conservation Corps style, rides the spine of the Blue Ridge Mountains, overlooking the snaking bends of the Shenandoah River to one side, and an endless horizon of Virginia farmland on the other.

Interstate 81 empties into Interstate 40 in the foothills of the Great Smoky Mountains. From here, the road stretches almost endlessly west. But along the way, make sure to stop in Music City, Tennessee’s capital. Yes, it’s all about the country (and western)—from the shows at the Grand Ole Opry (which has been running since 1925) to the bars lining Broadway downtown, you’ll find plenty of places to tap your cowboy boots. But plenty of other genres, too—on any given night, you can find everything from funk to old-time rock and roll being played live.

Right at the northern tip of the Mississippi Delta, Memphis moves to the sounds of the South. The spirit of Elvis remains at Graceland, where you can still tour through the Jungle Room. But also spend some time on Beale Street, where you’ll find jazz and the blues.

Moving west along I-40, the Ozarks in Arkansas give way to vast horizons in Oklahoma. Perhaps America’s most underrated city, Oklahoma City is home to a number of world-class museums. A good place to stop for a night—or three—spending time in museums dedicated to everything from art to science, railways to cowboys, bones to banjos.

Approaching through the Sandia foothills, this mid-sized city appears from a sea of red desert. After a few days on the road, you’ll be ready for a break. Ride the aerial tramway to Sandia Peak, where you can peer down from the 10,378-foot summit. Visit during their famous hot air balloon festival, which takes place in early October, when more than 500 of these colorful aircraft soar. (Or just charter your own ride, at any time.) Walk through Old Town Plaza, which dates back to the 19th century, or, for a little more adventure, paddle a kayak along the Rio Grande.

While you usually picture Arizona as a desert destination, Flagstaff is very different, tucked at a high altitude (above 6,000 feet) in one of the largest forests of ponderosa pines in the world. And this is a place where you can truly experience old Route 66, which once ran right through town. Tour the murals downtown, then consider a bit of a detour. Heading west from here, leaving the freeway at Seligman, you’ll pass a series of classic locations, all the way to Kingman. Stop frequently—at caverns and kitschy snack bars and places like Peach Springs, the main inspiration for the town of Radiator Springs in the movie “Cars.”

Also a departure from the main route, the South Rim of this American icon sits about 90 minutes north of Flagstaff. While it’s one of those places (like the Taj Mahal or the Eiffel Tower) that you see all the time in photos, a first impression here is still one that you’ll remember for the rest of your life. Walking to the edge, the canyon seems to stretch forever, a gulf that stretches up to 18 miles across at its widest, and 277 miles long, along the sparkling blue of the Colorado River.

When you reach Barstow, you’re almost there. Surrounded by the broad expanses of the Mojave Desert, make one last pit stop here before making your way southwest into the undulating sprawl of Los Angeles. A worthwhile way to spend part of the day is at Calico Ghost Town, which boomed in a silver rush in the 1880s. Yes, it’s touristy, but fun, one of the state’s two official ghost towns, and a place where you can pan for gold, tour a mine, and ride a two-foot, six-inch narrow-gauge railway.

Once you arrive in Los Angeles, make your way all the way to the Pacific—where you can’t drive any further west. While Route 66 actually, officially, ended at a random intersection somewhere in downtown LA, this historic route symbolically finds its finish at the water, marked with an End of the Trail sign on the Santa Monica Pier. Stand in front of it, take a photo, and breathe in all that sultry, salty air. Savor the fact that you’ve made it clear across the continent. Then leave the car parked for a while. Grab a little dinner, maybe some seafood, and wait for that orange sun to set and drop into the ocean.