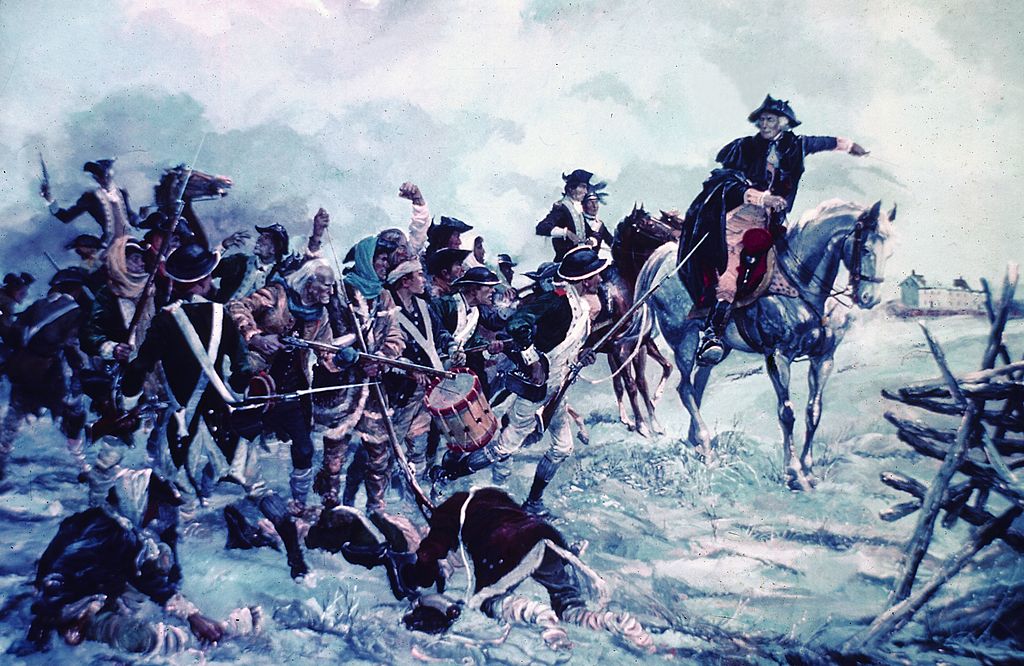 The fledging nation faced hyperinflation during the years 1775–1880. The notes fell in value even before independence was declared, and the Continental Army suffered for it. (MPI/Stringer/Getty)
History

George Washington—surveyor, farmer, soldier, and statesman—never thought of himself as an economist, but experience taught him a great deal about fiat (unbacked) paper money. When the Congress foisted it on his Continental Army and tried to pay for food with it, his men suffered privation.

By contrast, the nearby British ate well because they paid in gold and silver. A few years later, in 1787, Washington declared that the inevitable effects of paper money were “to ruin commerce, oppress the honest, and open the door to every species of fraud and injustice.”

The hyperinflation of the Continental dollars that Congress printed between 1775 and 1780 wasn’t the first paper money episode in North America. Nearly a century before, New England provided the setting for an especially interesting case in economic history. Washington may well have known of it.

The late Austrian School economist Murray Rothbard briefly mentioned it in a 1963 article for the Foundation for Economic Education, titled “Mercantilism: A Lesson for Our Times.”

“The fateful issue was made in 1690, to pay for a plunder expedition against French Canada that had failed drastically. But even before this, the leading men of the colony were busy proposing paper money schemes.”

The expedition to which Rothbard referred grew out of King William’s War (1688–97), which spread to England’s North American colonies from Europe. In August 1690, under the command of Sir William Phips, 34 ships and 2,000 men departed Boston on a mission to seize Quebec in New France (French Canada).

The troops were to be paid out of the booty that Phips expected to grab once he took Quebec, but by late fall, he returned to Massachusetts defeated and empty-handed. Mutiny threatened as the men demanded payment. Its treasury depleted, the government of the colony decided on Dec. 10 to emit a sum of 7,000 pounds in paper money.

The ill-fated Quebec expedition, however, cost much more than 7,000—an estimated 50,000 pounds, in fact. On February 3, 1691, the government belched out another batch of paper and declared that it could be used in payment of taxes.

The Massachusetts paper money of 1690–91 was “backed” only by the good faith of the colonial government, not by specie or land as had been the case for previous paper monies. The troops and other creditors weren’t happy about that (the paper instantly began to depreciate) but events in quick succession prevented both a revolt and runaway inflation.

In May, the government passed a law limiting the total emission to 40,000 pounds. It locked away the printing presses so no one could print any more. In October, it destroyed at least 10,000 pounds of it that had been paid to the Treasury in taxes. Furthermore, by year’s end, it levied 30,000 pounds in new taxes for the purpose of retiring the bulk of the remainder. And Phips himself dipped into his personal fortune to buy much of the rest with gold.

Twenty-five years later, the Western World’s first experience with paper hyperinflation took place in France. From 1715 to 1720, without any of the provisions that restrained the Massachusetts paper of 1690–91, France printed until its money became utterly worthless.

Debasing a nation’s money is a time-honored occupation of more governments than we can count. Before paper, it took the form of “clipping” coins, sometimes until they became too small to circulate, or by mixing junk metals in with the precious ones. The ancient Israelites were criticized for it by the prophet Isaiah (“Thy silver has become dross”). The Romans financed their welfare/warfare state by repeatedly debauching the currency. The German micro-states famously did it during the Thirty Years’ War (1618–48), and so on, and so on. At least the Massachusetts Bay Colony in the late 17th century nipped it in the bud rather quickly.

A gold or silver standard, by the way, doesn’t mean paper money can’t be printed. It simply means that paper is a redeemable substitute for the real thing. When their money is “backed” by gold or silver, people may prefer the convenience of paper, and have confidence in it, if they know they can redeem it on demand.

Why did Massachusetts embark upon a short-lived experiment in unbacked paper money in 1690? Why didn’t it simply do as it and other colonial governments had done before, namely, immediately offer to redeem the paper into coin or land? The expenses of war don’t tell the full story here.

Historian Richard Sylla notes that Massachusetts lost both its charter and its mint in 1684. Until those were restored, it had no choice but to engage in what he calls “monetary innovation.”

Expanding on that thesis, historian Dror Goldberg says that without a charter after 1684, all land in the colony reverted to the King, and no one but the King could offer his land to anybody. Until a new charter could be negotiated, London prohibited the colony from operating a mint, which closed the door to backing the paper with coin. The best that Massachusetts could do was to issue paper with nothing more than a vague promise to redeem it in something of value at some later date.

As Goldberg puts it, “While paper money had to be issued to pay the troops, it had to look as if it was not money.”

To Massachusetts’s credit, the paper money of 1690–91 wasn’t forced on anyone. The government didn’t declare it to be legal tender, meaning no one was required to use it to settle debts. Not even the troops were required to accept it or to use it in any payments. It was quickly limited and retired. All this means that to the extent the paper was successful, it was because it mimicked a hard money standard more than it was a true experiment in long-term, unbacked and irredeemable paper money.

In effect, the notes were short-term IOUs.

George Washington’s skepticism of paper money still stands. The Massachusetts experience of 1690–91 doesn’t make a case for unbacked paper money unless measures are taken almost immediately to either destroy or to back it, in which case one must ask, why bother with it in the first place?

“The Massachusetts Paper Money of 1690” by Dror Goldberg (Journal of Economic History, December 2009)

“A History of American Currency” by William Graham Sumner

“Tracts Relating to the Currency of Massachusetts Bay, 1682-1720” by Andrew McFarland Davis

“Mercantilism: A Lesson for Our Times” by Murray N. Rothbard

“Where Have All the Monetary Cranks Gone?” by Lawrence W. Reed