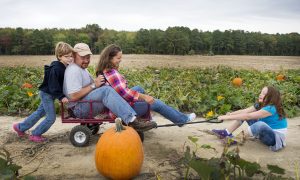 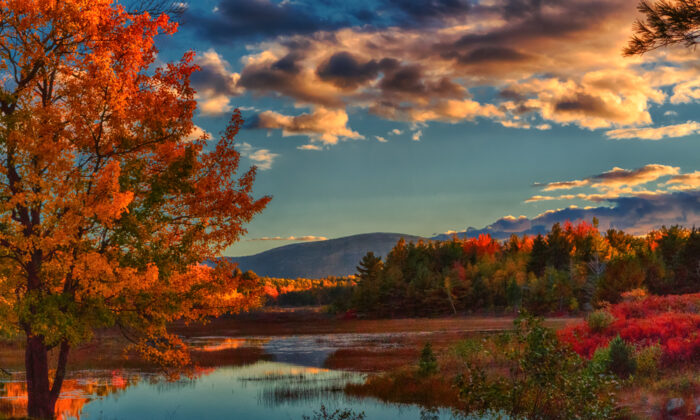 It’s a time for bursts of orange, red, golden yellow, and deep brown, when warm summer winds turn a little chilly, and the transition of seasons whirls around us. Trees, green just a few days ago, become vibrant and lovely reminders that autumn is upon us.

In September and October, some places really put on a show, welcoming “leaf-peepers” to come and see the splendor of their forests, towns surrounded by the ultimate in fall wonder. If you’re looking for a leaf-peep show (yes, that’s a thing), here are the five best places to do it.

Located about four hours north of New York City, this long, serpentine lake at the base of the Adirondacks is one of America’s original tourist destinations. Early visitors arriving in the 19th century by trains, which emptied into beautiful boats run by the Lake George Steamship Co., found a wild, untamed place, perfect for treks along mountain paths.

It inspired artists, too, including the romantic painters of the Hudson River School, who dramatized the lake’s curves on their canvases. Today, while most visitors arrive by road, those steamships still roll out on the lake on scenic cruises—the perfect way to take in all that fall wonder. And you’ll have plenty more to do, too—fall includes an Oktoberfest.

Bringing together the twin pleasures of ocean and forest, this seaside village was, in the Gilded Age, an enclave for the mega-wealthy, including the Rockefellers and the Vanderbilts. They built rambling estates, threw lavish parties, and even raced horses here—you can still feel a bit of that glory by staying in one of the historic hotels in town that date back to the 1880s.

And while thoughts of the Maine shore may involve warm, salty breezes and lobster rolls under the sun, on the sand, autumn has many charms, too. Acadia National Park—which the park service calls the Crown Jewel of the North Atlantic Coast—mixes rugged, rocky cliffs, and beaches with a patchwork of conifers and leafy trees, the green of spruce-firs creating a dappled tapestry offset by colorful ash, beech, oaks, and maples.

Drive 27 miles of scenic roadway (including Park Loop Road), or hike—the park has 158 miles of trails, including the vertiginous Precipice Trail, which ascends 1,000 feet in less than a mile (the views are worth it). Then, head out on the water. Local operators offer whale watching tours into October, where you can spot seals and puffins, haul a lobster trap, or take a perfect photo of a humpback fluke, that black tail forming a perfect contrast with the burst of forest color, back on Mount Desert Island.

Leaving the interstate and approaching from the west, you’ll notice two things as you make your way toward this small village of about 5,000. One, the rolling, contoured countryside quickly rises, the undulating land in autumn raising spectacular scenes on the slopes of some of the highest mountains east of the Mississippi.

Home to Dolly Parton’s Dollywood and the many glittering attractions of Pigeon Forge, this area of east Tennessee is crowded with pretty much any tourist-friendly place imaginable to spend your money.

But it’s the natural attractions that truly entice. Established in 1934, Great Smoky Mountains National Park is America’s most-visited park, and spreads out just outside the village limits. Enjoy the views from various angles—on the aerial tramway at Ober Gatlinburg, or at the top of the 407-foot Space Needle—then take a scenic drive along the 5.5-mile loop of the Roaring Fork Motor Nature Trail. And disappear into the park and get lost, at least for a few hours, on a trail winding past waterfalls and under that golden canopy.

While most of America’s leaf-peeping takes place in the eastern United States, home to deciduous forests and their fair-weather leaves, Aspen isn’t evergreen. Surrounded by its namesake tree, the slopes of the Elk Mountains, a range of the Rockies, glow gold, red, and orange in the fall.

The scenery is fabulous just walking the streets of this famous ski town, but it’s also a perfect place for a drive. Wind through the green and gold in Castle Creek Valley and finish at Ashcroft, a ghost town once known as Castle Forks City, which, when it peaked during a silver boom in the 1880s, was once home to two newspapers and more than 20 saloons. (You can take a tour of the remaining buildings, which are back-dropped by a colorful ridge, with a docent.)

Or navigate above the treeline to the heights of Independence Pass, which sits at 12,095 feet—the views on the way are worth the trip. And head for a hike at the iconic Maroon Bells, twin 14,000-foot peaks whose snow-crested summits and golden forests are reflected in the calm, clear lake at their feet.

Set in a broad, bustling valley, some come to this New England village with one activity in mind—shopping at the hundreds of outlet stores that attract thousands every year. But long before the outlet malls, many of the first tourists made the journey here by railway after seeing a painting by the White Mountain Art Movement, during which some 400 artists who gave expression to the big peaks and valleys here. And a visit, especially in autumn, does indeed feel like stepping into the middle of a painting.

It’s often ranked as one of the top fall destinations in the country. You can admire the foliage by driving the 26 scenic miles of the Kancamagus Highway, or taking the Auto Road to the top of 6,288-foot Mount Washington, the highest peak in the Northeast, whose bald summit feels more Alpine than it does Appalachian.

Or board an old-time train on the Conway Scenic Railway. Its Mountaineer train features 1950s-era passenger coaches that rumble to rugged Crawford Notch, a round trip that takes a little over five hours. Then go to Sherman Farm—it has the state’s top corn maze—and head back into town for dinner (and, yes, maybe a little shopping).