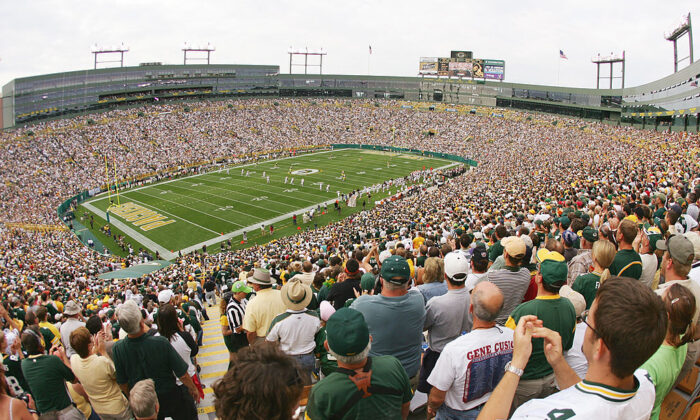 Green Bay Packers fans cheer from the stands against the Cleveland Browns at Lambeau Field in this file photo. (Jeff Gross/Getty Images)
Destinations

As the weather cools and the leaves begin to turn, it’s one of America’s greatest traditions—the start of football season. Lights come up on Friday night high school games across the country, while on Saturdays, college campuses from South Bend, Indiana, to Tuscaloosa, Alabama, flood with faithful fans, coming together to tailgate and celebrate time-honored game-day traditions.

But the biggest games are on Sundays, when the stadiums of the National Football League put on a show.

And while most will simply turn on their televisions and enjoy the spectacle of the big passes, the turnovers, the views from the Goodyear blimp—you can build a whole vacation around a trip to an NFL matchup. In many cases, the stadiums themselves are worth the journey, from historic and hallowed places such as Lambeau Field in Green Bay, Wisconsin, to gleaming new mega-complexes like the $5.5-billion SoFi Stadium in Los Angeles. And it’s about more than the game—these cities provide many amusements and attractions for those in the family who may not be quite so enchanted by the action on the gridiron. Here are America’s five best cities to build a football vacation.

It’s just one word, and in football circles, it’s almost sacred—Lambeau. Home of the Green Bay Packers, winners of the first two Super Bowls, the sidelines here at Lambeau Field were once stalked by famed coach Vince Lombardi. (Now a legend, the championship trophy today bears his name.) The stadium itself is basic, by modern standards, with fans sitting on rows of bleacher-style seating. But the Sunday experience here is probably unparalleled anywhere else in the league, with the only community-owned team in the NFL hosting some of the loudest and most dedicated fans.

Arrive a day or two early to take a stadium tour, which includes the opportunity to walk out of the player’s tunnel, visit one of the locker rooms, and tour the 15,000-square-foot Green Bay Packers Hall of Fame. Then pick up your cheese-head hat, and watch for the Lambeau Leap on game day. And afterward, spend a little more time in town, or head out to neighboring Door County, which is home to gracious coastlines, beaches, and fish boils, set on a peninsula lined on one side by the namesake bay, and on the other, by the broad expanses of Lake Michigan.

Just a few miles from LAX, the city’s shiny new stadium—which opened just last year—will host the next Super Bowl, as well as the opening and closing ceremonies of the 2028 Summer Olympics. The silver eminence of SoFi Stadium is home to two NFL teams, the Los Angeles Rams and the Los Angeles Chargers. Built at a total cost upward of $5 million, it’s a rather remarkable place, winner of several major architectural awards. The playing field, plus more than 70,000 seats and an adjoining pedestrian plaza, are covered with a translucent roof that maximizes the California sunshine, open at the sides to let in fresh Pacific breezes. And you’ll always know the score—the in-house, wrap-around “infinity screen” weighs more than 2 million pounds, stretches 120 yards, and displays some 80 million pixels.

But, obviously, there’s a lot more to do in the City of Angels than attending a football game. From the stadium, in Inglewood, head just to the south for the beaches of El Segundo, Manhattan, and Hermosa. Studio tours at both Paramount and Sony are just nearby, offering a chance to catch a glimpse of Hollywood. Or hop in a cab and head north, about 20 minutes (depending on the traffic) for a night enjoying the lights of the Sunset Strip.

In South Florida, the stadium isn’t the main attraction. Located well inland, in Miami Gardens, Hard Rock Stadium isn’t new (it opened in 1987), has been known by more than a half-dozen names, and was once also home to a baseball team, the Florida Marlins. But, as with everything in this city, the game-day experience is a cultural melting pot, with plenty of Latin beats at the tailgate, as everyone comes together to celebrate the hometown Dolphins.

And the coast isn’t far. Head to the east, and find the sand, on a series of long, slender barrier islands, the calm waters, marinas, and busy boat traffic on the Intracoastal Waterway to one side, the crashing waves of the Atlantic on the other. In Bal Harbor, glamorous high-rise hotels soar over the surf. Further down the shore, those Latin rhythms rock all night long in South Beach. Admire the Art Deco and Art Nouveau architecture. Take a dip in the shimmering, aquamarine water. Then, dance the night away at one of the local salsa clubs.

Football is a very big deal in Texas, and the Dallas Cowboys have long claimed the tagline of being “America’s team.” For a time, AT&T Stadium, sometimes known as “Jerry’s World,” built by billionaire team owner Jerry Jones, was the envy of the league, with its retractable roof and maximum capacity of more than 100,000 spectators. As it’s located in Arlington, about halfway between Dallas and Fort Worth, you’ll have your choice of attractions in the Metroplex when you attend a game in northeast Texas.

Head to Fort Worth, less than a half-hour away, to find the Wild West. The Stockyards National Historic District dates to the late 19th century, and once sold more than a million head of livestock every year. Today, it’s an excellent place to pick up a 10-gallon hat and a pair of snakeskin boots. And visit Billy Bob’s, the “world’s largest honkey tonk,” for some rodeo and a show—the sprawling nightclub, featured heavily on the television show, “Dallas,” has hosted some of country music’s biggest acts, from Merle Haggard to Charlie Daniels and Willie Nelson.

Once America’s ultimate blue-collar town, this western Pennsylvania city pumped out massive amounts of steel for decades. And the hometown Steelers have long been the league’s hardest working team, the franchise dating back to 1933, with several championships along the way. Their home, Heinz Field, has few of the gimmicks of recently opened stadiums. An open-air venue, subject to the elements of this northerly climate, its rising concourses sit along the broad waters of the Ohio River, the sleek towers of downtown rising over one of its end zones.

And in the last couple of decades, Pittsburgh has reinvented itself. Now a high-tech hub, its smokestacks no longer pour forth. Ride the Monogahela Incline, climbing the steep waterside bluffs, for unparalleled views over three rivers. Take a tour with Rivers of Steel, where former workers share their stories as guides in now-shuttered mills. And lunch at Primanti Brothers, whose sandwiches—grilled meat, cheese, coleslaw, fries, all between thick slices of Italian bread—once traveled in the lunchboxes, and are now served in stylish restaurants.