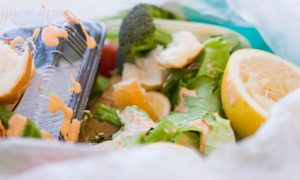 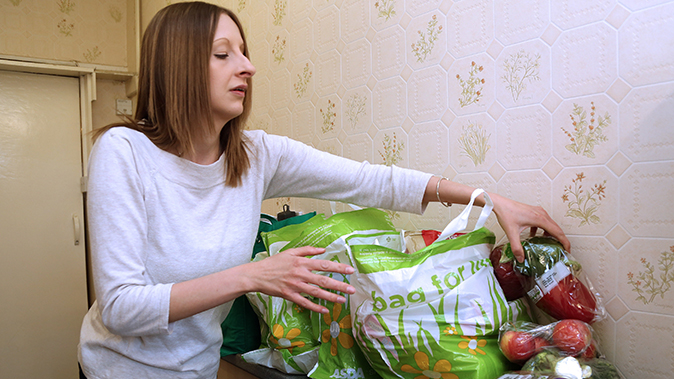 A woman unloads grocery at her home on March 23, 2015. (Geoff Caddick/AFP/Getty Images)
Environment

Americans Are More Bothered With Leaving the Lights on Than Wasting Food, Study Says

About 31 percent of the total food supply in the United States goes to waste, but most American consumers are unaware of how much food they’re wasting.

In fact, they are likely wasting more food than they think, according to a recently published national survey on food waste, conducted by Johns Hopkins University’s Center for a Livable Future.

According to the USDA’s (Department of Agriculture) latest estimates, 430 billion pounds of food was lost along the supply chain from harvest to consumer in 2010, costing a total of $161.6 billion. On the consumer level, Americans wasted almost 90 billion pounds, or 21 percent of the total food supply.

That averages to losses of $371 per person—or about 9 percent of the average consumer dollars spent on food in 2010.

Half of the World’s Food Is Thrown Away

Given the established data on food waste in the country, the researchers concluded that most Americans are “substantially underreporting their waste levels.”

The study revealed that many Americans lack awareness of how much food they waste, though they feel bad about throwing out uneaten food. Researchers found little difference in the responses among Americans of different age groups, races, education levels, income levels, or whether they lived in a rural or urban area.

About three-quarters of the survey respondents believed that they wasted less food than the average American household.

About three-quarters of the survey respondents believed that they wasted less food than the average American household, while 52 percent said discarding food bothered them “a lot” (out of a three-point scale: “does not bother me at all,” “bothers me a little,” or “bothers me a lot”).

Interestingly, when the researchers asked about other wasteful behavior, more respondents were bothered “a lot” by letting the faucet drip (72 percent) and leaving the lights on (57 percent).

What exactly do Americans throw out? The survey respondents said they threw out fruits and vegetables the most, followed by homemade meals, bread, meat, milk, and lastly, packaged foods.

As for why they throw out food, the responses reflect common dilemmas at home: worries about spoiled food leading to food poisoning (65 percent), and wanting to eat only fresh foods (60 percent).

For people who compost their uneaten food, they felt the practice absolved them of their guilt: 41 percent said wasting food doesn’t bother them because they compost.

But there is hope: Most people said they want to further reduce their food waste. Sixty-five percent said they were fairly or somewhat interested in taking action, while 43 percent responded that they felt it would be easy or very easy to significantly reduce their household food waste.

These results can help experts formulate their messages about how to reduce food waste, the researchers said. Experts should promote the idea of eating produce and other food that is old, less aesthetically pleasing, or nearing its expiration dates—but still safe to eat.

Experts can also capitalize on the heavy financial costs and environmental impact of wasting food. According to a 2012 study published in the Science of the Total Environment journal, wasted food in North America and Oceania accounts for 35 percent of freshwater consumption, 31 percent of cropland, and 30 percent of fertilizer usage.